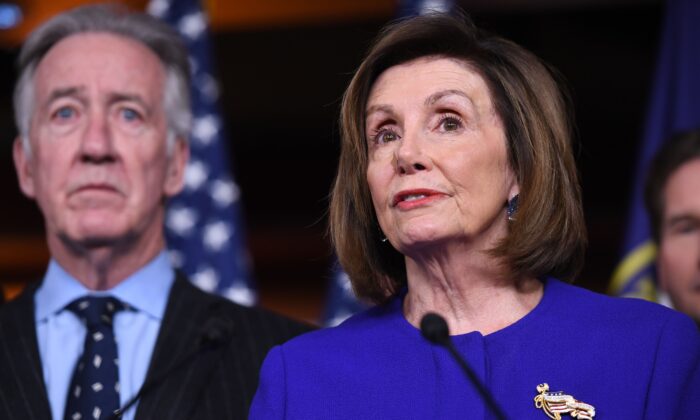 While the House can vote on the USMCA as early as next week, it will take longer for Senate to clear the deal
By Emel Akan

WASHINGTON—After months of negotiations between the Trump administration and House Democrats, Congress will move forward with ratifying the new trade agreement with Canada and Mexico that will supplant the North American Free Trade Agreement (NAFTA).

House Speaker Nancy Pelosi (D-Calif.) announced on Dec. 10 that both sides ironed out their differences on the agreement, paving the way for a House vote as soon as next week.

“This is a day we’ve all been working to and working for, on the path to ‘yes,’” Pelosi said during a press conference an hour after House Democrats announced two articles of impeachment against President Donald Trump.

“There’s no question, of course, that this agreement is much better than NAFTA,” Pelosi said. “But in terms of our work here, it’s infinitely better than what was initially proposed by the administration.”

Following the announcement by Pelosi, the trade deputies of the three countries signed the modifications to the United States–Mexico–Canada Agreement (USMCA) in Mexico City.

The Trump administration and House Democrats have been negotiating since June to work out their differences on the USMCA, mainly on the provisions of labor, environment, and prescription drugs. House Democrats formed a working group led by House Ways and Means Committee Chairman Richard Neal (D-Mass.) to negotiate directly with U.S. Trade Representative Robert Lighthizer.

The dispute over the trade deal escalated when Pelosi raised doubts in November about the possibility of approving the accord before the year-end. Many feared that the approval of the pact would drift into the 2020 election cycle, making it hard for lawmakers to focus on the agreement amid the impeachment process.

In a tweet on Dec. 10, Trump welcomed the news, stating that the deal “will be the best and most important trade deal ever made by the USA.”

“We will finally end our Country’s worst Trade Deal, NAFTA!”

Once approved by Congress, the deal will replace the 25-year-old NAFTA. The House can vote on the USMCA as soon as next week. A congressional aide to Neal told The Epoch Times that “Chairman [Neal] has indicated he would like it to happen sooner rather than later.”

However, the deal may not be able to clear the Senate before the end of 2019. Hours after Pelosi’s announcement, Majority Leader Mitch McConnell (R-Ky.) told reporters that the Senate wouldn’t take up the USMCA trade deal next week before congressional recess. He added that the Senate was unlikely to vote on the deal until after the expected impeachment trial for Trump.

House Democrats claimed that they made “transformative changes” to the revised NAFTA deal in the areas of enforcement, workers, environment, and prescription drugs.

“While the Trump Administration’s original Agreement fell short of Democrats’ high standards, the revised version will serve as a model for future U.S. trade agreements,” Neal said in a statement.

The revised version, according to the statement, “closed enforcement loopholes and streamlined the dispute settlement system” by removing language that allows a party to block the formation of a dispute settlement panel. In addition, for the first time in a trade deal, both sides created rules of evidence that “will help the United States successfully litigate labor, environmental, and other fact-intensive disputes.”

The revised version also has stronger rules on labor provisions, which include new monitoring and enforcement mechanisms to ensure that the U.S. government can monitor Mexico’s compliance with the agreement and resolve state-to-state dispute effectively.

The changes also strengthened the rules on environment and improved access to affordable prescription drugs. For example, the revised deal removed a provision requiring the trading partners to “provide at least 10 years of exclusivity for biologics, some of the most expensive drugs on the market.”

‘She has weakened America’

The United States, Canada, and Mexico agreed on the new trade deal in October 2018 after a lengthy and intense negotiation process, and the countries’ leaders signed it on Nov. 30, 2018.

Republican lawmakers accused Pelosi of holding the agreement for more than a year.

He said in a statement that they denied Democrats’ “wish list of billions in wasteful spending to benefit special interests.”

Other demands such as “including provisions from the Paris Climate Accord or the expensive Butch Lewis Multiemployer Pension Act” were also refused by Republicans, he said. Republicans also prevented proposals to reduce key protections for U.S. pharmaceutical innovators “by eliminating all intellectual property protections for biologics.”

For the past several months, Pelosi has faced a growing bipartisan pressure to bring the agreement to the House floor before the end of the year. Business groups and farmers throughout the country have also raised concerns about delays in ratifying the agreement.

The nation’s largest business organization, the U.S. Chamber of Commerce, welcomed the news, stating that the deal “will especially benefit American farmers, manufacturers, and small businesses.”

The new trade agreement has strong labor provisions, which makes the deal an important milestone for international trade, according to trade experts. The deal incentivizes the use of high-wage labor to boost production in the United States and Canada, which suffered from lost jobs to Mexico.

The deal establishes modern digital trade rules that have significant implications for the U.S. technology sector.