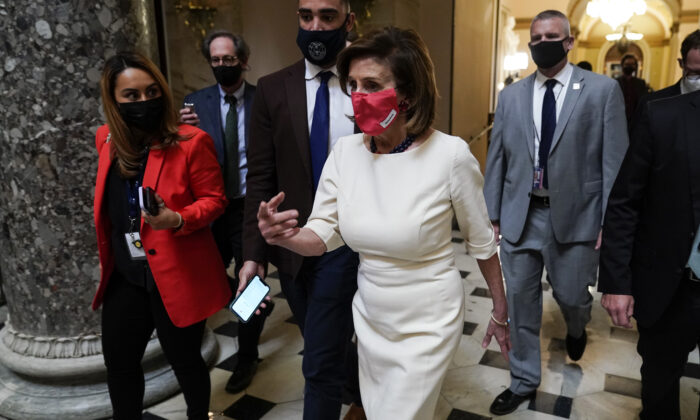 Democrats dominated the controversial process of voting by proxy in 2021, according to a study released by the Republican-leaning Ripon Society.

Speaker of the House Nancy Pelosi (D-Calif.) pushed the absentee voting measure through, which allowed members of Congress to vote by proxy, at the beginning of the COVID-19 pandemic in May 2020. The measure allowed them to work from home, while purportedly satisfying the Constitution’s requirement that lawmakers be present to vote on and approve legislation.

Under the rules laid out in H.Res. 965, sponsored by Rep. Jim McGovern (D-Mass.), proxy voting was supposed to be in effect for only a limited time, as little was known about COVID-19 in 2020.

Republicans, in conjunction with the chamber’s only independent member, Rep. Justin Amash (I-Mich.), voted unanimously against the measure. By contrast, only three Democrats voted against it.

Since May 2020, the rule change has been consistently extended and remains in effect at the time of publication.

Republicans have remained generally opposed to the measure since its approval, and the Ripon Society’s study of the practice in 2021 shows that most Republican House members have refrained from using it. Democrats, by contrast, have taken full advantage of the more relaxed rules, casting the overwhelming majority of votes by proxy in 2021.

Among the House’s 440 members, 339 have used proxy voting on at least one occasion.

The measure has been controversial with Republicans since its original introduction and approval by the Democratic majority. In a Jan. 12 speech on the House floor, Rep. Virginia Foxx (R-N.C.) criticized the practice, which she called “asinine.”

“Have House Democrats become so averse to work that they now believe voting from their couches is a viable option?” Foxx asked. “It is time to end proxy voting once and for all. It is one of the many blemishes that have been put on this great body under one-party rule.

“If the current majority won’t end proxy voting, Republicans will snuff it out entirely when we take back the House. It is past time to get back to work.”

Recently, House Minority Leader Kevin McCarthy (R-Calif.) made a bid to have the proxy voting rules overturned by the judiciary. An appeals court sided with Pelosi, impelling Republicans to make a final effort to overturn the rule in the Supreme Court.

McCarthy and other Republicans argued in their petition that a clause in Article I, Section 6 of the Constitution, which states that lawmakers “shall not be questioned in any other place,” made the practice illegal. Pelosi argued that the Constitution gave the House wide permission to make its own rules.

Republicans also have attempted to overturn the rule through legislative means.

In March 2021, Rep. Mike Gallagher (R-Wis.) put forward legislation H.Res. 191, which sought to overturn the proxy voting rules altogether and force members of Congress to again come to Capitol Hill to have their votes counted. It was referred to the House Rules Committee, but has received no consideration or vote in the committee.

Another measure put forward by Rep. Ted Budd (R-N.C.) in May 2021, H.R. 7044, would have allowed the practice of proxy voting to continue, but would have seen that members voting by proxy lose their entire pay for that legislative day. As happened to Gallagher’s legislation, H.R. 7044 has effectively died in committee.

With the Supreme Court’s decision to not hear the Republican challenge to the controversial rule, Republicans have little means of overturning proxy voting rules in 2022 without the consent of Pelosi and a handful of Democrats.