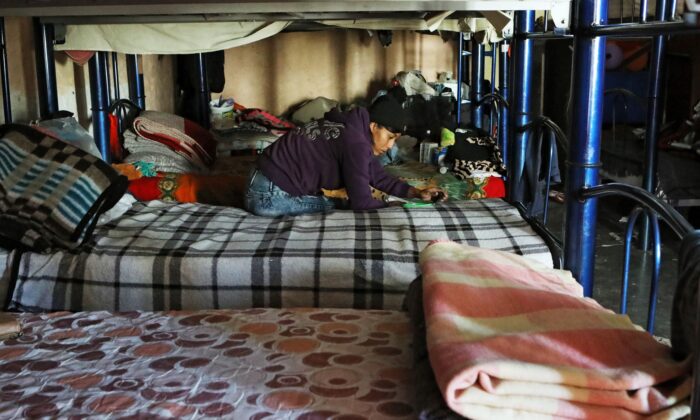 A Central American migrant remains at El Buen Samaritano shelter while waiting to apply for asylum in the United States, in Ciudad Juarez, Chihuahua state, Mexico, on Dec. 17, 2019. (Herika Martinez/AFP via Getty Images)
By Zachary Stieber

House Democrats demanded documents from the Department of Homeland Security (DHS) for a probe into a policy from President Donald Trump’s administration that requires asylum seekers to stay in Mexico as they wait for their cases to go through U.S. immigration courts.

The policy is known as “Remain in Mexico,” or the Migrant Protection Protocols (MPP).

The House Judiciary Committee said on Tuesday that it was probing the policy, claiming it has led to refugees and asylum seekers “being kept in Mexico indefinitely and without due process or access to counsel.”

“We strongly believe that MPP is a dangerously flawed policy that threatens the health and safety of legitimate asylum seekers—including women, children, and families—and should be abandoned,” they wrote.

“MPP is inconsistent with [the department’s] statutory authority, while exposing thousands of people to threats of murder, sexual violence, and kidnapping as they are forced to wait in extremely dangerous conditions before their asylum claims may be heard,” they added.

The Department of Homeland Security didn’t immediately return a request for comment.

The lawmakers asked for documents and communications from Dec. 20, 2018, to Jan. 2, 2020, relating to the implementation of the “Remain in Mexico” policy as well as statistics including the total number of individuals impacted by the policy.

The program allows the U.S. government to send illegal aliens back to Mexico to await their immigration court proceedings, instead of being given an ankle bracelet and released into the United States.

If their claims are deemed meritorious by an immigration judge, they will be granted legal status and benefits to live and work in the United States. If not, they’ll be sent back home, which, under the new agreements with Central American countries, has become easier.

The MPP effectively stopped “catch and release” and DHS recently said the policy has been successful since being implemented.

In a statement announcing the expansion of the program to the Nogales Port of Entry south of Tucson, Arizona, Wolf said, “MPP has been an extremely effective tool as the United States, under the leadership of President Trump, continues to address the ongoing humanitarian and security crisis at the border.”

“The Department is fully committed to the program and will continually work with the Government of Mexico to expand and strengthen it. I am confident in the program’s continued success in adjudicating meritorious cases quickly and preventing fraudulent claims,” he said.

So far, DHS said, the program has led to more than 56,000 migrants being returned to Mexico to await immigration hearings.

Jack Phillips and Charlotte Cuthbertson contributed to this report.