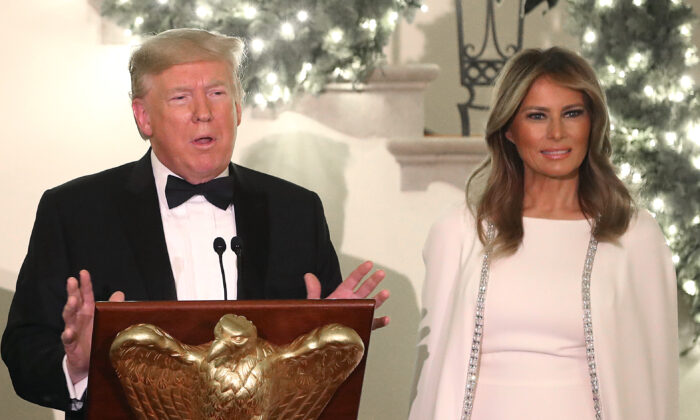 President Donald Trump speaks as First Lady Melania Trump looks on during a Congressional Ball in the Grand Foyer of the White House in Washington on Dec. 12, 2019. (Mark Wilson/Getty Images)
Trump Presidency

Several House Democrats attended a White House party as their colleagues in the Judiciary Committee worked to vote on articles of impeachment against President Donald Trump.

On the same evening, members of the Judiciary Committee held a lengthy debate before Chairman Jerrold Nadler (D-N.Y.) postponed the vote until Friday morning, where articles of impeachment passed the panel in a party-line vote.

A Lee representative told the political website that her attendance at the ball suggests “she’s committed to being a bipartisan problem solver through and through.” Lee said in a statement on Friday that she will vote to impeach Trump

In statements to the press, Delgado has said that “articles of impeachment are warranted,” while Luria also may vote in favor of impeachment. “I think that I made the right decision. I don’t care if that means I don’t get reelected in 2020,” she told PBS last month.

Cisneros’s chief of staff Nic Jordan told Axios that he didn’t deny his boss was at the party. He said that Cisneros has previously said he would support impeachment.

Rep. Justin Amash (I-Mich.), who left the Republican party earlier this year, also attended the party. Amash had previously said he would vote to impeach Trump.

“Rep. Amash has celebrated Christmas at the White House with his colleagues every year he has served in Congress,” Amash’s chief of staff Poppy Nelson told Axios.

The other representatives didn’t issue comments in the report.

A White House official, who was not named, told Axios that it’s unusual that members of Congress who support impeachment would attend the event.

“It’s kind of odd to be voting to say the guy is a clear and present danger to the globe, but I’m going to come and hang out at the White House for a black-tie affair,” the person remarked.

The report also said Sen. Tammy Baldwin (D-Wisc.) was at the Congressional Ball, and spokesman John Kraus said there’s no connection between her attendance and what she might do if impeachment reaches the Senate.

During the ball, President Trump again touted the U.S. economy.

“We have the best economy we’ve ever had in the history of our country. And the stock market, as you probably have heard—all those 401(k)s and all of those jobs out there—the stock market just hit a brand-new high. That will be 129 records that we have in, really, fairly much — substantially less than three years. So, that’s something,” he said to applause. “Our country is doing really great. I want to thank everybody for being here.”