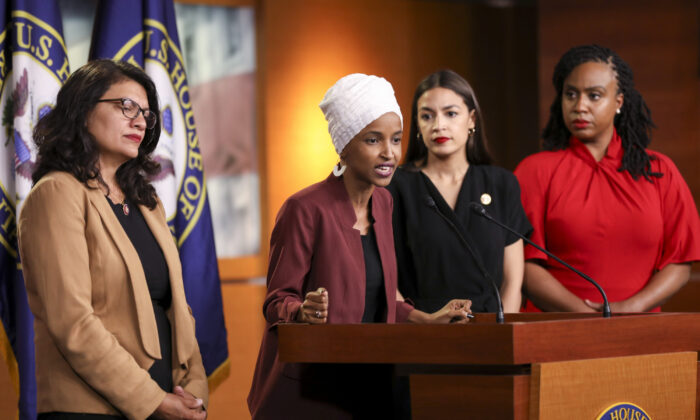 A group of 89 House Democrats asked President Joe Biden to renew efforts to address the purported “climate crisis” after the failure to pass the $1.85 trillion Build Back Better Act (BBB) in December.

The BBB would have appropriated $555 billion for climate policy, and would have funded things such as tax incentives for electric vehicles, a national network of electric vehicle charging stations, and a New Deal-like agency called the Civilian Climate Corps.

After Sen. Joe Manchin (D-W.Va.) said in December that he could not support the bill over concerns about continuing inflation, Democrats’ climate push fell into the background. As lawmakers have struggled on the proper U.S. response to the Russian invasion of Ukraine, climate issues have lost their interest.

“We must take action on policies you have proposed to support American families, and address the threat of climate change,” Casten wrote. “The more than $555 billion in climate investments in the House-passed Build Back Better Act can serve as the building block to restart negotiations.”

The lawmakers called for the United States to “[lead] the world in limiting global warming to 1.5 degrees Celsius,” a task which they admitted “will require a monumental effort.”

“The climate components of Build Back Better are an indispensable foundation,” Casten argued.

“Throughout 2021, we bore witness to the devastating impacts of the climate crisis, further illustrating why transformational action cannot wait,” the letter continued. “Inaction now will mean irreversible consequences for our future generations.”

Upon taking office, Biden called for the United States to cut its carbon dioxide emissions in half by the year 2030, and Democrats have pushed for the widespread adoption of electric vehicles since taking control of the government.

“During your State of the Union address, you called for decisive action on clean energy and climate change,” Casten wrote. “With your support, urging Congressional leaders to move forward with these climate provisions would mark the largest climate investment in our nation’s history, setting the United States on course to meet our 50 to 52 percent greenhouse gas emissions reduction targets by 2030, while creating millions of good paying union jobs, reducing energy costs for consumers, advancing environmental justice, investing in climate resilient housing and community infrastructure, and strengthening our economy.”

The Democrats argued that the economic costs of doing nothing would far exceed the costs of the programs.

“It is clear that climate change is a threat multiplier to our economy,” the lawmakers wrote. “Responding now will protect American families and businesses against the most devastating financial impacts.

“But the longer we wait, the more expensive it will be to transition at the speed required, and we will have incurred billions in damages and harm to our communities, infrastructure, environment, and public health and safety along the way.”

Though many aspects of the BBB divided Democrats, Democrats in both chambers of Congress are largely in favor of passing climate legislation. Even as he rejected the $1.85 trillion draft of the BBB, Manchin suggested that he would support a standalone climate spending bill.

In the Senate, where Democrats hold the thinnest-possible majority with the vice president’s tiebreaking vote, Manchin’s support is critical for the passage of most Democrat policy goals.

Having been given some indication in the past that Manchin will support a dedicated climate bill, the 89 House Democrats wrote in their letter: “Restarting negotiations with climate action is a clear path forward to deliver tangible results to the American people. Your leadership in these negotiations will ensure that we can pass on a safe, healthy, and vibrant society and planet to our children.”

The letter was signed by several prominent progressives, including the so-called “Squad” members—Reps. Alexandria Ocasio-Cortez (D-N.Y.), Rashida Tlaib (D-Mich.), and Ayanna Pressley (D-Mass.)—indicating that the issue remains as important as ever to progressive lawmakers.

As gas prices have risen in recent weeks, Democrats have increasingly pushed for the United States to “break its dependence” on oil through climate spending rather than increasing domestic oil production, which Biden significantly restricted upon taking office.

Likewise, Sen. Bob Menendez (D-N.J.) has pushed for the United States to “break [its] dependence on oil” through “renewable energy and advanced alternative fuels” instead of increasing its oil production.