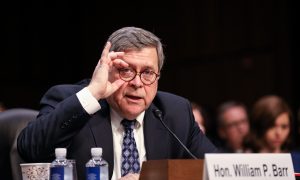 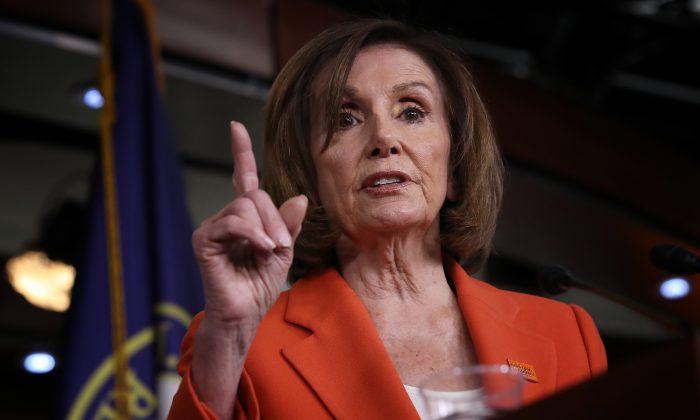 Speaker of the House Nancy Pelosi (D-Calif.) answers questions during her weekly news conference at the U.S. Capitol in Washington on June 5, 2019. (Win McNamee/Getty Images)
Politics

WASHINGTON—Seven Republicans joined 237 House Democrats late on June 4 in passing the American Dream and Promise Act of 2019, which critics claim provides amnesty and a path to citizenship for up to 4 million illegal immigrants, even as thousands more cross the U.S. southern border daily from Mexico.

Democrats hailed the measure, H.R. 6, even though it has virtually no chance of passage in the Republican-controlled Senate, and President Donald Trump would almost certainly veto it if it reached his desk.

Speaker of the House Nancy Pelosi (D-Calif.) told reporters during her June 5 briefing with reporters that the passage was “a great day for us,” because immigrants are “a constant reinvigoration for America.”

“Today, more than a million people who grew up in America don’t know any other home. Yet, they live in fear of being deported to countries they never or barely knew,” House Majority Leader Steny Hoyer (D-Md.) told the House during debate.

“These Dreamers, these yearners for justice and opportunity, deserve to live without fear … We are a nation of immigrants made great by immigrants. This bill will remove that fear,” Hoyer said.

The CBO said the bill “would provide lawful immigration status and work authorization to more than 2 million people who otherwise would be physically present in the United States without such legal authority.”

House Republican Whip Steve Scalise (R-La.) claimed the bill’s “eligibility requirements are so broad that anywhere from 2 to 4 million illegal immigrants of any age could benefit.”

The measure includes no funding for the southern border wall sought by Trump, nor does it increase funding to expand the ability of the U.S. Immigration and Customs Enforcement (ICE) bureau nor U.S. Customs and Border Protection (CBP) agency to handle the surging flow of illegal immigrants coming to the United States.

“In the first half of fiscal year (FY) 2019, Border Patrol has apprehended over 385,000 individuals on the southwest border,” CBP Chief of Operations Brian Hastings told reporters in April.

“This is more than double the apprehensions during the same timeframe last fiscal year and it exceeds all of FY 2017 apprehension totals,” Hastings said. The federal fiscal year is from Oct. 1 to Sept. 30.

“As I briefed before, this issue just isn’t simply about pure volume and flow, but specifically the rapid increase in family units specifically from the Northern Triangle [Guatemala, Salvador, and Honduras]. Family unit apprehensions have increased approximately 375 percent, as compared to the same timeframe last fiscal year.”

Former acting ICE Director Thomas Homan told The Epoch Times on May 24 that “the whole world knows if you want to come to the United States illegally, now’s the time to come. If somebody wants to come into this country and do bad things to this country, terrorists, or whatever … they’re going to take advantage of the porous border.”

Democrats, led by Pelosi, have until recently denied Trump’s claim that there is an illegal immigrant crisis.

Republican strategist Matt Mackowiak told The Epoch Times on June 5 that Democrats know measures like H.R. 6 have little chance of becoming law before 2020.

“The only conclusion one can draw is that they do not wish to make law, but to use the House floor as a messaging exercise. This is all about Campaign 2020,” Mackowiak said.

But Democratic strategists interviewed June 5 by The Epoch Times see House passage as an essential step in framing the 2020 presidential campaign for their party’s nominee against Trump.

“In advance of 2020, it’s important for Democrats to showcase what a Democratic Congress and presidential administration would look like and H.R. 6 is part of that bedrock,” Santa Cruz, California, County Supervisor Zach Friend said. Friend is also a former press secretary for Obama for America.

“In an era of daily scandal and investigation trying to break through and show that you have a better plan on immigration, taxes, and jobs for the middle class, climate protection, and more is key for House Democrats to build the policy and messaging framework for 2020,” he said.

Similarly, Robin Biro, who was a regional field director for President Barack Obama’s 2008 campaign, said, “We must pass this bill, even if it stands absolutely no chance of becoming law now, because it is just the right thing to do.”

Biro, a former U.S. Army Ranger, added that he “served side-by-side in the military with some of these ‘dreamers.’ We have to show good faith that we won’t turn our back on them, as they didn’t turn their respective backs on us.”