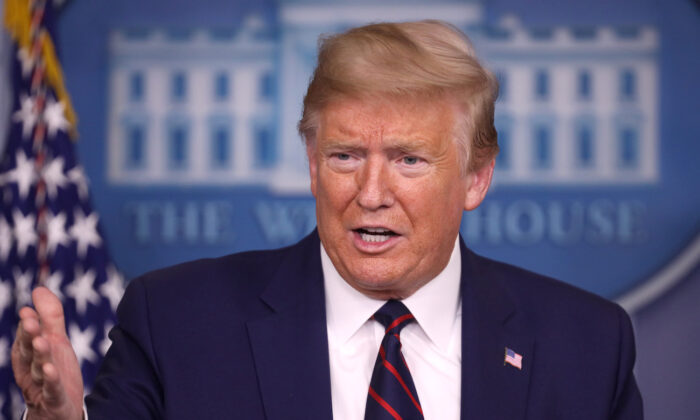 House Republican leaders are cautioning President Donald Trump against rushing a fourth CCP virus relief package, warning that the hasty spending could have long-term impact on the country’s debt.

Freedom Caucus Chairman Andy Biggs (R-Ariz.) and Republican Study Committee Chairman Mike Johnson (R-La.) sent a letter to the president on Friday urging him to reject requests for any additional relief packages, arguing that another bill would be premature since the recently passed bill, the CARES Act, has not yet fully taken effect.

“Most of the relief funding from Phase 2 and Phase 3 has not even been distributed yet. We advise caution in considering an additional round of spending outside of the regular process before we have seen the results of the previous three rounds of spending,” the lawmakers wrote. The letter was also signed by 20 other Republican lawmakers.

Congress passed a $2 trillion stimulus package last month that is slated to provide $1,200 for most Americans and $500 for every child, along with a number of measures to support small businesses and companies. Millions of Americans have lost their jobs and businesses have been forced to close as states ordered all nonessential businesses to close to slow the spread of the CCP virus.

House Speaker Nancy Pelosi (D-Calif.) and top Democrats have called for a fourth relief package in response to the pandemic that would include a bipartisan infrastructure deal. The president welcomed the infrastructure proposal in a Twitter post on Tuesday.

But during an interview with CNBC on Friday, Pelosi scaled back on her ambitions on what the next bill would entail, saying that an infrastructure deal that includes things like clean water and more broadband “may have to be for a bill beyond this.” Instead, she said the next bill would expand on the previous one while adding that she would like to see more direct payments to American working families.

In a statement released also on Friday, Pelosi said Congress “must work on an infrastructure package for recovery that addresses some of the critical impacts and vulnerabilities in America that have been laid bare by the coronavirus,” but did not specify whether this would be included in the next bill.

Senate Majority Leader Mitch McConnell (R-Ky.) has also signaled that he supports a fourth relief package, saying that it will focus on healthcare.

“[It] should be more a targeted response to what we got wrong and what we didn’t do enough for—and at the top of the list there would have to be the health care part of it,” he told The Associated Press, confirming there will be another measure.

House Republicans have expressed less enthusiasm about spending more money. House Minority Leader Kevin McCarthy was wary about the idea of a fourth bill when interviewed by Fox News. He said he would like to see how the $2.2 trillion package turns out before making moves on the next one.

In the letter on Friday, the lawmakers expressed confidence that the country would “win the war” against the pandemic but added that the nation may not win its war against the mounting debt.

“Even before the CARES Act was signed into law, the national debt stood at $23.6 trillion, which equates to nearly $73,000 for every citizen—man, woman, and child,” they wrote. “Now we will add at least $2 trillion to this already unsustainable sum. Every dollar we add to the debt today makes it increasingly less likely that we will be able to provide even the basic services our citizens have come to expect in the decades to come.”

“While each of us hold differing opinions about whether the CARES Act was warranted to meet an unprecedented crisis, we are united in the belief that going forward the U.S. simply cannot afford any more deficit spending of this magnitude.”

They said that if further relief packages are necessary, they should only contain measures to “restore and grow the U.S. economy with as little long-term government intervention as possible.”

“Prosperity will return to America, just as it has after every other crisis in our nation’s past. And we fully expect prosperity to return more quickly this time, Mr. President–due in large measure to your leadership. In the meantime, we must ensure that we do not compromise the future of our children and grandchildren or alter the free-market values that have made us the envy of the world,” they added.