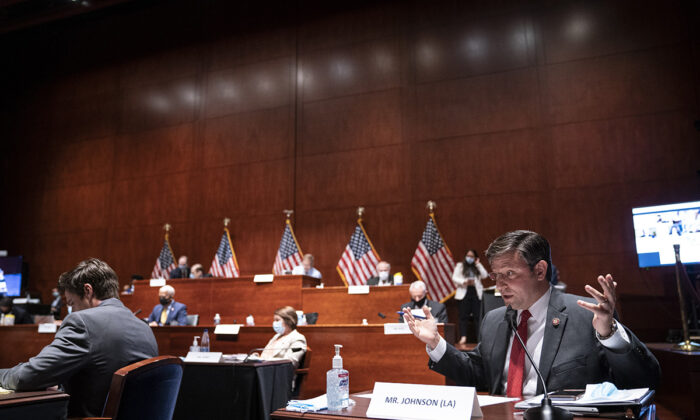 The House Armed Services Committee approved an amendment to the National Defense Authorization Act (NDAA) FY2022, which would require top government agencies to investigate and publish an unclassified report on the true origins of the COVID-19 pandemic.

“My amendment to the NDAA will REQUIRE U.S. Defense and Intelligence agencies to create an unclassified report regarding the TRUE ORIGINS of the pandemic. The American people deserve to know! We must hold the Chinese Communists—and anyone else involved—ACCOUNTABLE!” wrote Johnson in a Facebook post on Wednesday.

Republican members of Congress have been calling on the full government to take action to hold the Chinese Communist Party (CCP) accountable for any possible cover-up of the pandemic and misinformation about the origins of the virus.

“In the face of mounting evidence and unanswered questions regarding the origins of COVID-19, my amendment will mandate a comprehensive investigation into how the pandemic was unleashed on the world,” Johnson said in a written statement. “It is critical for us to have these answers to help prevent future pandemics.”

In addition to Johnson’s amendment, Rep. Mike Gallagher (R-Wis.) had an amendment passed by the panel, which would investigate whether the participants in the Military World Games in Wuhan in 2019 were infected by the virus.

These two amendments are the latest pieces of legislation that the GOP members have offered to hold the CCP accountable for the initial mishandling of the pandemic in 2019, and to investigate where the outbreak started, how it was spread, and how the CCP was involved.

Rep. Jim Banks (R-Ind.) said that China should be investigated and held accountable at the very least for preventing the World Health Organization and the U.S. Center for Disease Control from entering China and investigating the origins of the virus at the start of the pandemic in January. “… That alone is why China is morally culpable, why they should be held accountable for the spread of the coronavirus,” Banks said at the Liberty University Conference on U.S.–China relations in July 2020.

Rep. Dan Crenshaw (R-Texas) agreed that China was not transparent with other countries and knew there was a virus early on, because they cut off travel inside of China, “between Wuhan and other cities in China, but not internationally. So again, … I completely agree with the take that Jim had on this. … They did allow it to spread, and then they also spread misinformation, through their contacts at the World Health Organization,” Crenshaw said.

Some moderate Democrats have also voiced concerns about the CCP’s role in the spread of the pandemic.

Reps. Stephanie Murphy (D-Fla.), Kendra Horn (D-Okla.), and former representative Max Rose (D-N.Y.) in July 2020 led the Blue Dog Coalition to introduce the Preventing China from Exploiting COVID-19 Act. This bill was aimed at requiring the director of national intelligence to work with the heads of the Department of Defense, State Department, and Department of Homeland Security to assess the possible ways China has and could further undermine the United States’ and its allies’ interests during the pandemic.

“Bipartisan concerns in Congress about Chinese government policies have only increased once COVID-19 emerged in China and spread to virtually every country in the world. Since the start of this pandemic, we have witnessed a pattern of alarming behavior from the Chinese government in a range of areas,” said Murphy in a press statement.

While Democrat House leaders have not joined the call to hold the CCP accountable, House Minority Leader Kevin McCarthy (R-Calif.) on June 23 laid out an eight-pronged plan focused on the communist regime and other bodies to “ensure Americans get the accountability and transparency they deserve.”

“We cannot allow the wrongdoing of China to go unnoticed—and more importantly, to not allow the accountability to happen,” McCarthy said at a press conference in Washington.

The first item on the agenda, he said, is to introduce legislation compelling the government to declassify intelligence relating to the origins of the CCP virus, which caused COVID-19.

President Joe Biden on May 26 ordered the intelligence community to produce a report in 90 days on the origins of the virus, which was first reported in the Chinese city of Wuhan. He said intelligence agencies are looking at rival theories, including the possibility of a laboratory accident in China.

The Biden administration said they won’t take immediate action on China to pressure the communist regime for an independent probe into whether COVID-19 originated in a Wuhan lab until there is an “international consensus,” national security adviser Jake Sullivan said on June 20.