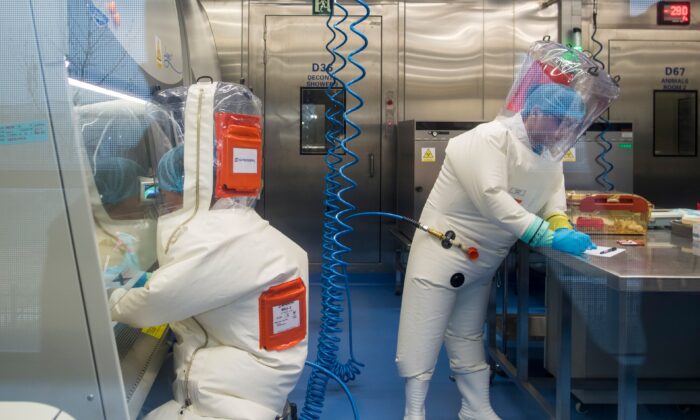 Workers are seen next to a cage with mice (R) inside the P4 laboratory in Wuhan, Hubei Province, China, on Feb. 23, 2017. (Johannes Eisele/AFP via Getty Images)
Congress

The House Appropriations Committee has approved a ban on sending funding to the Wuhan Institute of Virology, the Chinese lab at the heart of the controversy over the origin of the virus that sparked the COVID-19 pandemic.

In a June 30 voice vote, members of the committee adopted a fiscal 2023 budget amendment (pdf) that explicitly precludes any funding to the Wuhan lab, which some U.S. lawmakers say is where the CCP (Chinese Communist Party) virus, the pathogen that causes COVID-19, originated.

“None of the funds made available by this Act may be made available to the Wuhan Institute of Virology, or any other laboratory located in a country determined by the Secretary of State to be a foreign adversary, including China, Russia, North Korea, and Iran,” reads the amendment, which was proposed by Appropriations Committee Chair Rep. Rosa DeLauro (D-Conn.).

The committee later approved the fiscal year 2023 Labor, Health and Human Services, Education, and Related Agencies bill, which is to feature the amendment, on a 32–24 vote. The legislation now faces a vote in both chambers before heading to the president’s desk for his signature.

While the committee said in a statement that DeLauro’s amendment made “technical and noncontroversial” changes to the measure, the inclusion of the Wuhan facility is noteworthy, as it sends a signal that lawmakers are attuned to the controversy surrounding U.S. taxpayer dollars being channeled to the lab.

The move was praised by the nonprofit White Coat Waste Project (WCW), which said in a statement that this “historic legislation” was in part thanks to the WCW’s lobbying and investigative efforts into what it described as “cruel and wasteful animal experiments in countries deemed ‘foreign adversaries.'”

The nonprofit also stated that “an overwhelming majority of Americans want to defund animal labs run by our adversaries,” citing a poll that showed that 64 percent of U.S. respondents back this view.

According to WCW, there are currently 32 animal labs in Russia and China eligible to receive U.S. taxpayer dollars.

The U.S. Agency for International Development (USAID) awarded a total of $1.1 million to the Wuhan Institute of Virology (WIV) between October 2009 and May 2019, the agency wrote in a May 2021 letter (pdf) to Rep. Guy Reschenthaler (R-Pa.).

Reschenthaler alleged that the funding was used for a study that used gain-of-function research to create “a hybrid, man-made virus by inserting a spiked protein from a wild coronavirus into a mouse-adapted SARS-CoV backbone, which could infect human airways.”

The agency said the funds were channeled through EcoHealth Alliance and were meant for the purpose of advancing research on critical viruses that could pose a threat to humans. It also denied claims that the money was used for gain-of-function research, which seeks to boost viral lethality.

“USAID never authorized or funded any work that aimed to increase the ability of infectious agents to cause disease by enhancing its pathogenicity or by increasing its transmissibility (research known as “Gain of Function” studies) at WIV,” the agency wrote in the letter.

In February 2021, Reschenthaler introduced legislation that sought to prohibit funding to the EcoHealth Alliance. That proposal was referred to the House Oversight and Reform Committee, where it has stalled.

‘Preponderance of Evidence’ for Lab Leak

In August 2021, a report by Republican lawmakers noted a “preponderance of evidence” for the theory that the virus that caused the COVID-19 pandemic leaked from the Wuhan lab.

Chinese officials have denied the lab leak claim, insisting that the virus made a natural jump from animals to humans.

Rep. Mike McCaul (R-Texas) said in testimony before the Coronavirus Select Subcommittee Republicans that evidence points to a lab leak as the likely origin of the virus, saying that “it’s time to completely dismiss the wet market as the source of the outbreak” and “the preponderance of the evidence that it came from the lab is very convincing.”

U.S. intelligence agencies later said in a report that a natural origin and a lab leak are both plausible hypotheses as to the origin of the COVID-19 pandemic, but that a lack of evidence makes a definitive conclusion either way impossible.

It’s a sentiment echoed by McCaul in his testimony.

“Unfortunately, we may never know for certain because the Chinese Communist Party went to great lengths to cover up this outbreak,” he said. “They detained the doctors in order to silence them. They disappeared journalists. They destroyed lab samples. They hid the fact there was clear evidence of human-to-human transmission. And they have refused to allow a real investigation into the origins.”