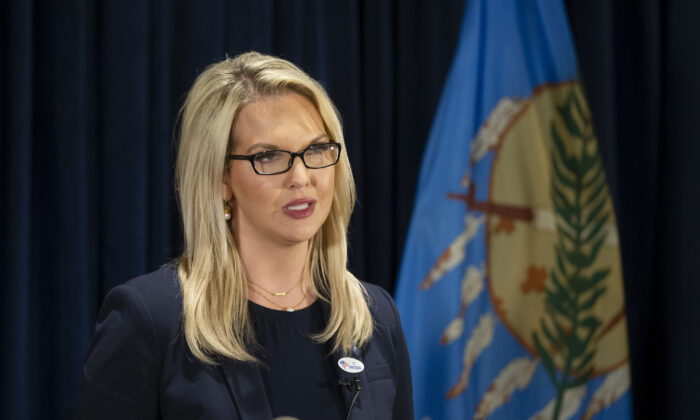 Abby Broyles, an Oklahoma-based Democrat who is running for the House of Representatives, has apologized for her behavior after reportedly getting intoxicated at a sleepover and berating middle school-aged girls.

The accusations were first reported by online media outlet Nondoc, who relayed reports that Broyles had “accosted” 12- and 13-year-old girls during a Valentine’s Day weekend slumber party, which Broyles was invited to by her friend who hosted it.

Broyles reportedly denigrated one girl for her acne and another for her Hispanic ethnicity. Later, she allegedly vomited in a clothes hamper.

Broyles initially denied Nondoc’s report, but later confirmed it in a statement to KFOR, a local news station in the state.

She blamed the event on an adverse reaction between sleep medication given to her by a friend and alcohol she had drunk the same evening.

“Instead of helping me sleep, I hallucinated,” Broyles told KFOR. “And I don’t remember anything until I woke up or came to, and I was throwing up in a hamper.”

On Twitter on Feb. 16 Sarah Matthews, mother of one of the girls berated by Broyles, decried Broyles’ behavior and said that the candidate had not reached out to apologize.

“It’s been five days and you have neglected to reach out to any of the young ladies (12 and 13 [year] olds, including my daughter) you verbally and emotionally abused last weekend,” Matthews said in a thread, adding, “I thought I would give you a chance to try to apologize (at a minimum) here.”

She continued, “For someone who pontificates to be undyingly pro woman, I am disgusted by your behavior and find it appalling you couldn’t understand why their parents are angry. Your vile, cruel, and bigoted behavior should not be excused or ‘swept under the rug.'”

Matthews said that when she vomited, Broyles ruined a pair of shoes that one of the girls had saved up her own money to buy and demanded that Broyles pay to replace the shoes.

In her interview with KFOR, after finally admitting that the allegations were true, Broyles said: “I want to say sorry from the bottom of my heart, I apologize for any hurt or damage or trauma that my behavior, when I didn’t know what I was doing, caused. I’m deeply sorry.”

In a statement to the Associated Press, Broyles said, “The things I’m accused to have said are not who I am. They’re not a reflection of my beliefs at all.”

She opined that the accusations, despite being true, were being spread as part of a “media smear campaign” orchestrated by her political opponents.

Broyles, who is an attorney, mounted an unsuccessful bid for the U.S. Senate in 2020. Incumbent Sen. Jim Inhofe (R-Okla.) defeated Broyles by a huge margin, winning 62.9 percent of the vote compared to Broyles’ 32.8 percent.

In 2021, Broyles announced that she would again make a run for Congress, this time challenging incumbent Rep. Stephanie Bice (R-Okla.) in Oklahoma’s fifth congressional district.

Even though Oklahoma is generally a GOP stronghold, races in its fifth district are a bit tighter.

The district includes Oklahoma City; Cities are usually friendlier to Democrats than suburban or rural areas, and Oklahoma City is no exception to this rule.

Oklahoma has five districts in total.

In 2018, which saw a wave of Democrats winning seats across the nation, Democrat Kendra Horn won 50.7 percent of the vote compared to the GOP’s 49.3 percent, so the district is very much in play this year. The victory indicated to Democrats, who last won the seat in 1974, that the district was a vulnerable one, and the 2018 race is sure to have an effect on Democrats’ funding of future races in Oklahoma’s fifth district.

The district is likely Democrats’ only chance of gaining a foothold among Oklahoma’s U.S. congressional delegation. Because Democrats are widely expected to lose the majority in November, every seat counts for President Joe Biden’s party.

Broyles, who is the only Democrat to have announced a primary run in the district, has made clear that she will not cancel her campaign due to the ongoing scandal. But in a midterm season that is already expected to be tough for Democrats, the controversy may be the nail in the coffin for Democrats’ hopes of a blue seat in Oklahoma.