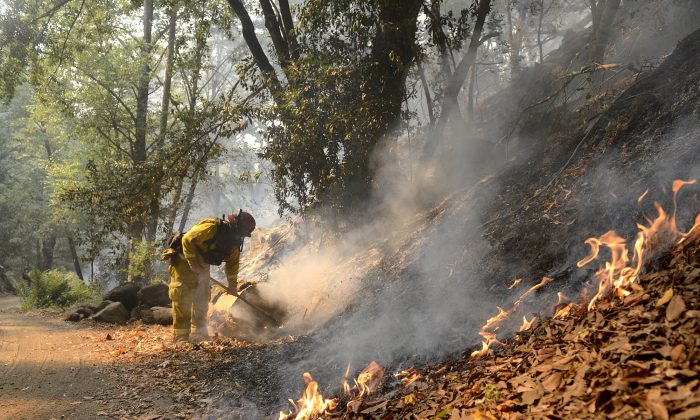 Rancho Adobe Fire Captan James Devrloo keeps an eye on a fire line on Garza Trail in the Rancho San Carlos Community as a wildfire burns in Carmel Valley, Calif., Wednesday, July 27, 2016. Acting Gov. Tom Torlakson, substituting for Gov. Jerry Brown who is at the Democratic National Convention with other top state officials, declared a state of emergency for the fire and another wildfire outside of Los Angeles on Tuesday night. The move frees up funding and relaxes regulations to help with the firefight and recovery. (David Royal/The Monterey County Herald via AP)
US

BIG SUR, Calif.—Firefighters are bracing for hotter weather and lower humidity in the area near Big Sur where a wildfire has destroyed 34 homes and killed a bulldozer driver working to contain the massive blaze.

Cooler temperatures gave the more than 3,000 fire crews working around the clock a brief respite Wednesday but forecasters say Thursday and Friday will bring temperatures in the upper 80s with light winds and low humidity.

Another 10 outbuildings also have been razed by the blaze that has charred 37 square miles (93 sq. kilometers). The blaze is 10 percent contained, the California Department of Forestry and Fire Protection said.

On Tuesday, the operator of a bulldozer was killed when it rolled over during the fight against the blaze.

Another operator escaped injury when a second bulldozer rolled over and sustained minor damage, according to the California Department of Forestry and Fire Protection.

The name and age of the operator who was killed was not immediately available.

Battalion Chief Robert Fish said the operator was working in steep and difficult-to-access terrain when the accident occurred. Fish did not have further details about the incident but said 60 bulldozers were being used in the fight against the fire.

The death occurred as firefighters worked around the clock against the blaze near a scenic stretch of the California coast, where smoke and the threat of flames forced the closure of state parks near Big Sur, a popular tourist area.

At least 2,000 structures were threatened.

Pacific Coast Highway remained open Wednesday, but its signature views were marred by a dark haze.

“We wanted to see more of the ocean,” said Phoenix-area tourist Jim Newby, who drove along the highway with his family Tuesday. “We didn’t see a whole lot of it unfortunately, and it’s a beautiful, beautiful stretch.”

The blaze could crest a ridge and make a run toward campgrounds, lodges and redwoods closer to the shore, officials said.

Hot, Hard Days Ahead for Firefighters on California Blaze

To the south, firefighters made progress containing a huge blaze in mountains outside Los Angeles, allowing authorities to let most of 20,000 people evacuated over the weekend return home.

The fire has destroyed 18 homes since it started and authorities found the burned body of 67-year-old Robert Bresnick on Saturday in a car and said he had refused to be evacuated.

The fire in rugged wilderness between the northern edge of Los Angeles and the suburban city of Santa Clarita grew slightly to nearly 60 square miles (154 square kilometers). It was 40 percent contained.

U.S. Forest Service spokesman Justin Correll said the 40 percent containment figure was good news but “that means there’s still 60 percent of containment left to get. And that’s a lot.”

There was also high potential for “fire runs” up slopes still choked with unburned brush, he said.

The Big Sur closures were put into place for parks that draw 7,500 visitors a day from around the world for their dramatic vistas of ocean and mountains.

Residents of 300 homes were ordered to evacuate and more than 2,000 firefighters were trying to douse the blaze that started Friday.

Eight men who had been working on a marijuana field were rescued near the fire lines Tuesday after spending days wandering smoky trails with little water or food. No serious injuries were reported, John Thornburg, a spokesman with the Monterey County Sheriff’s Office, told the Monterey Herald (http://bit.ly/2ab2Gpy). Authorities initially said the men had been hiking in the area.

Acting Gov. Tom Torlakson, substituting for Gov. Jerry Brown who is at the Democratic National Convention with other top state officials, declared a state of emergency for both fires on Tuesday night. The move frees up funding and relaxes regulations to help with the firefight and recovery.