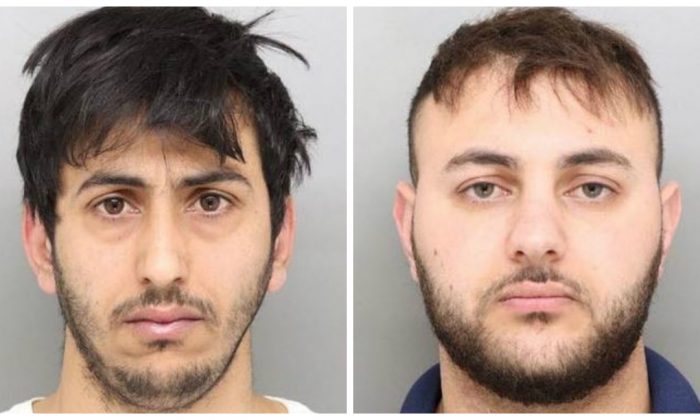 A hotel clerk in Ohio called 911 after spotting a 13-year-old girl who the clerk believed was in an unsafe situation.

“I have a guest that’s in the room, and she is a minor. And she says she’s feeling unsafe because there’s two gentlemen that brought her here, and she’s afraid,” the worker told dispatch.

The girl had said she was 18 but the worker, a mother of 10, said she felt the girl was much younger.

Detectives with the Hamilton County Sheriff’s Department rushed over to the Cincinnati Days Inn & Suites and soon arrested Tayseer Mustafa, 21, and Mohammed Jagameh, 29, both of Norwood.

Prosecutor Dave Wood said during a court appearance on Wednesday, March 21, that the two men lured the girl to the hotel room to have sex with her.

“The allegations are the defendant [Jagameh] and his adult friend met the victim, a 13-year-old girl, online and provided that victim, who was a runaway from the city of Toledo—they provided her with whiskey and then solicited her to engage in sex with them and touched her breast over, on the outside of her clothing,” Wood said, reported WLWT.

Court records indicate that the girl declined the proposition and called 911, reported ABC 6.

Jagameh admitted to the allegations but said he believed the girl was 18 years old.

But the hotel worker disputed that account, saying the girl clearly looked younger.

Detectives said the man met the girl through Plenty of Fish, a dating website. PlentyOfFish is described as “the leading free online dating site for singles.”

“After taking our Chemistry Test we match you with personalities that lead to long lasting stable relationships. We match you with online daters that will meet your emotional needs,” the website states.

“Discover. Your Relationship Needs. We will tell you what you need in a relationship, where you screwed up (without knowing it) in past relationships and a customized action plan to make your next relationship successful.”

Dating website expert Steve Smith told WLWT that “Plenty of Fish is very much like OKCupid or even Match.com.”

He added, “Those types of sites are certainly used for dating, but they’re also used often for pedophiles.”

Their cases are set to go to a grand jury for possible indictments on March 30. Mustafa faces charges of importuning, interference with custody, and selling liquor to minors, as well as sexual imposition.

Jagameh faces charges of importuning, interference with custody, and selling liquor to minors.