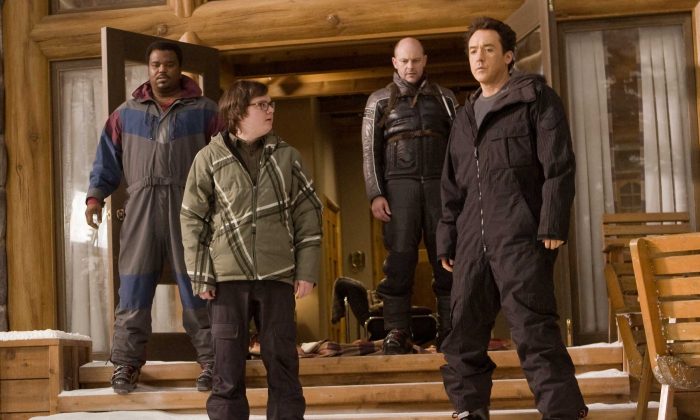 By Matthew Rodgers
Print
Don’t be put off by the ridiculous title, the film-makers are well aware that this high concept comedy is 90-odd minutes of nonsense. In fact there is a moment in which one of the characters breaks the fourth wall of film-making by looking directly into the camera with a perplexed look and uttering, “Hot Tub Time Machine”. It’s a self deprecating, knowing wink to the viewer that establishes the tone for this frequently hilarious comedy, and if that doesn’t raise the temperature then it’s a chance to see Crispin Glover in a movie about time travel for the first time since Back to the Future.

Adam (John Cusack) has just been dumped by his girlfriend; Nick (Craig Robinson) lives under the oppressive thumb of his own partner; and Lou (Rob Corddry) is the loose cannon whose cry for help reunites the gang after years apart. Along with geeky Jacob (Clark Duke) they take a trip to their old haunt in a bid to re-establish lost bonds and reminisce about the good old days. So far, so Stand by Me, but with much more toilet humour. It’s when a can of high energy drink called Chernobley is spilt onto the electrical components of the titular hot tub that our quartet are thrown back to the day-glo delights of the 1980s and start manipulating the space-time continuum of their pasts.

HTTM is a guilty pleasure, you know you shouldn’t really laugh at its puerile brand of humour but you can’t help but get caught up in the leg slapping hilarity of it all. It is low-brow comedy at its basest level but it never apologises for that, and anybody disappointed or offended by it surely can’t have mistaken that title for the latest Jane Campion snorefest.

Unfolding at a relentless pace, its hard to recall stand-out set-pieces because the film feels more like a succession of sketches as our bungling time-travellers stumble through the ski-resort like they’re in a Benny Hill video. But a Black Eyed Peas inspired sing-along and a wonderfully consistent over-the-top final third that features severed limbs, Cold War comedy, and the sort of rule breaking that would have Doc Brown tearing his hair out, make this the perfect post-pub viewing.

It’s certainly more enjoyable than Cusack’s last foray into the mainstream with the ludicrous 2012. It’s his role that’s probably the most muted, although with such an array of “wacky” characters it’s important that at least one remains grounded for the audience’s sake, although he does get a very funny break-up scene.

The rest of the plaudits come in the form of a stand-off between Coddry, who is loud, obnoxious, funny, and Robinson, who is less showy but equally effective.

Throw in a cameo from the-never-as-funny-as-you-thought-he-was Chevy Chase, and this is a communal bath worth hopping into.