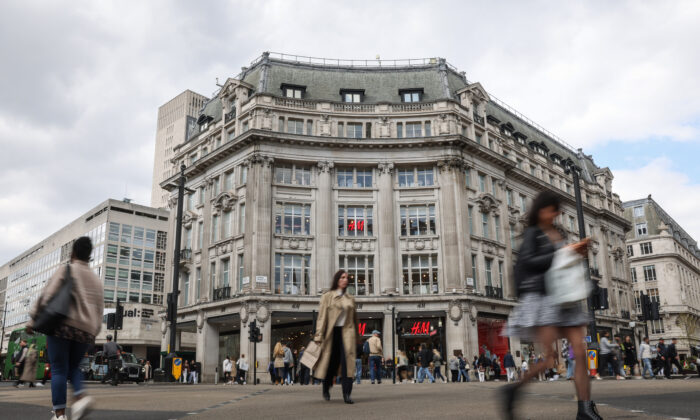 Demand for summer clothing and picnic food during the hot weather helped sales at retailers rebound last month, according to new figures.

The BRC-KPMG retail sales monitor for July showed that total sales increased by 2.3 percent during the month, bringing to an end three consecutive months of decline.

Nevertheless, industry experts said growth was still driven by inflation, with the price of products significantly higher than the same period last year.

Figures from the Office for National Statistics revealed that inflation hit a new 40-year high of 9.4 percent in June.

The volume of products sold during the month declined as price rises continued to weigh on customers.

“Summer clothing, picnic treats, and electric fans all benefited from the record temperatures as consumers made the most of the sunshine.

“However, with inflation at over 9 percent, many retailers are still contending with falling sales volumes during what remains an incredibly difficult trading period.”

The monitor also showed that retailers saw food sales increase by 2.3 percent over the three months to July amid rampant inflation.

However, overall sales of non-food items, such as clothing and homeware, declined by 2 percent in the latest quarter.

Sales of non-food products from stores were up 2 percent for the three-month period as shoppers continued to switch back to UK high streets, but online sales were down 3.9 percent.

Paul Martin, UK head of retail at KPMG, said: “The summer could be the lull before the storm with conditions set to get tougher as consumers arrive back from summer breaks to holiday credit card bills, another energy price hike and rising interest rates.

“With stronger cost-of-living headwinds on the horizon, consumers will have to prioritise essentials, and discretionary product spending will come under pressure.”

Data from the credit card business showed that spending grew 7.7 percent in July against the same period last year.

The figures showed that Britons spent more on clothing, beauty and UK holidays as the school holiday period began.

Credit card spending on essential items increased by 7 percent year on year, driven by higher prices for food and fuel.

Spending on utilities soared by 43.9 percent compared with the same month a year earlier.

Rocketing prices of some essential products meant customers began cutting back in other areas, such as overseas travel, and drinking and eating out.

Jose Carvalho, head of consumer products at Barclaycard, said: “July saw Brits get into the swing of summer by prioritising non-essential spending on staycations, new clothes and beauty products, while the heatwave gave an extra boost to the electronics sector, as consumers bought gadgets to keep cool.

“However, inflation continues to have a noticeable impact, with price rises forcing shoppers to spend more on essential everyday items such as fuel, butter and milk, and to cut back on some discretionary expenditure such as meals and drinks out, and holidays abroad.”