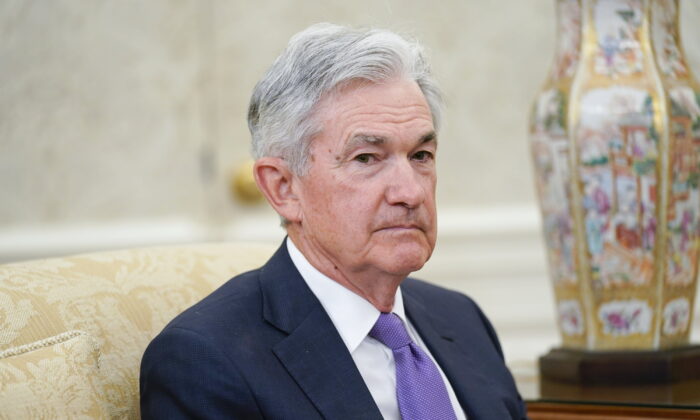 Federal Reserve Chairman Jerome Powell in the Oval Office of the White House on May 31, 2022. (Evan Vucci/AP Photo)
Economic Policies

WASHINGTON—For months, Chair Jerome Powell has held out hope that the Federal Reserve will be able to raise interest rates high enough to throttle rampant inflation without tipping the economy into recession.

Yet with the Fed set to announce another sharp interest rate hike after it meets this week, days after the government issued a scorching inflation report, the likelihood that the central bank can engineer a so-called “soft landing” appears to be dimming.

With inflation at a four-decade high of 8.6 percent, Fed officials are likely this year to boost borrowing rates even higher than was expected just weeks ago. The central bank may also signal, when its policy meeting ends Wednesday, the possibility of raising rates to a level that could weaken growth—elevating the risk of a recession.

Some economists now even think the Fed may decide to surprise the financial markets this week by raising its benchmark short-term rate by three-quarters of a point, for the first time since 1994, rather than the half-point that Powell had signaled last month. Wall Street traders have priced in a 30 percent likelihood of such a drastic move, according to the CME Group.

Even if an economic downturn can be avoided, it’s almost inevitable, analysts say, that the Fed will have to inflict some pain—most likely in the form of higher unemployment—as the price of defeating stubbornly high inflation.

“They need to accept the fact that you can’t fight inflation without imposing some pain on the markets and the economy,” said Ethan Harris, head of global economic research at Bank of America. “They shouldn’t coddle the markets by kind of implying that there’s no major issue here, we’re going to have a soft landing for the economy, I think it’s too late for that. We have to have a hard landing.”

The prospect that the Fed will accelerate its credit tightening, further raising borrowing costs for households and businesses, drove the stock market sharply lower Monday. The broad S&P 500 index fell into bear-market territory, having lost more than 20 percent of its value since its peak at the beginning of the year.

Fed officials, as a group, were slow last year to recognize how persistent inflation would be, believing instead that widespread price spikes would likely prove temporary. They are now acting forcefully to try to make up for their initial delay.

If, on Wednesday, the policymakers raise their benchmark short-term rate by a half-point—double the usual size—for a second straight time, the rate would rise to a range of 1.25 percent to 1.5 percent. Another half-point hike is considered likely at the Fed’s meeting in late July.

The officials have left some ambiguity about what they might do after that, at their meeting in September. Some analysts had thought the policymakers might then even pause their rate hikes altogether after comments by Raphael Bostic, president of the Federal Reserve Bank of Atlanta, had seemed to suggest as much.

But after Friday’s inflation report showed no sign of the easing that had been expected, most analysts now foresee another half-point hike in September. And economists at Goldman Sachs say they expect what would be a fifth half-point hike in November.

Last month, Powell laid down something of a marker when he said Fed officials would keep raising rates until they see “clear and convincing evidence that inflation is coming down.” At a news conference Wednesday, he may clarify what that evidence would be.

Inflation has now seeped into nearly every corner of the economy, with prices jumping in May for everything from rents to airline tickets to used cars to clothing to medical services.

Spiking oil prices have sent the national average for a gallon of gas above $5, according to AAA. Those high prices are weakening the ability of consumers—who drive most of the economy’s growth—to spend freely. Energy costs also pose a problem for the Fed because it can do little to mitigate such supply shocks yet can’t dismiss their impact.

Another concern for the Fed emerged Friday, when the University of Michigan’s monthly survey of consumer sentiment showed that Americans’ expectations for future inflation are rising. That is an ominous sign, because expectations can become self-fulfilling: If people expect higher inflation in the future, they often change their behavior in ways that increase prices. For example, they may accelerate large purchases before they become more expensive. Doing so can intensify demand and further fuel inflation.

Powell has often pointed to longer-term inflation expectations as “well-anchored,” because consumer surveys and financial market gauges showed that people and investors expected inflation to move back down toward the Fed’s target of 2 percent over the next five years. Low inflation expectations make it easier for policymakers to control price spikes.

But the Michigan survey found that Americans expect inflation to be 3.3 percent five years from now, the highest level since 2008 and up from a projection of 3 percent in May.

“The rise in long-run inflation expectations is a game changer” for the Fed, Thomas Simons and Aneta Markowska, economists at investment bank Jefferies, wrote in an email. As a result, the Jefferies economists now predict that the Fed will raise its rate by three-quarters of a point on Wednesday. Economists at Barclays are also forecasting a hike of that size.

On Wednesday, the Fed will also update its quarterly forecasts. Those projections are expected to show higher estimates for inflation and interest rates this year and slower growth. Economists also expect the Fed to forecast a somewhat higher unemployment rate, which would be its first acknowledgement that higher rates may affect the job market.

In March, Fed officials projected that their benchmark rate would be between 1.75 percent and 2 percent by year’s end. That level is now expected to be reached in July.

Krishna Guha, an analyst at investment bank Evercore ISI, thinks the Fed’s rate will be at 2.75 percent to 3 percent by the end of this year. At that level, rates will be above what the Fed calls “neutral,” a level that’s believed to neither restrain nor stimulate growth. Powell has acknowledged that it isn’t clear exactly where neutral is, but the Fed has generally assumed it to be around 2.5 percent.

This week’s meeting will also be the first for two of President Joe Biden’s new picks to serve on the Fed’s board, Lisa Cook and Philip Jefferson. Both are economists and have pledged in Senate testimony to support the Fed’s efforts to rein in inflation.