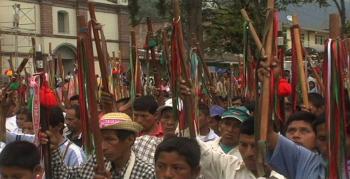 TORONTO—Controversy has surrounded the documentary “Stolen Land” which screened recently at the Hot Docs Film Festival in downtown Toronto.

The documentary chronicles the struggle of the Nasa, a tight-knit Colombian indigenous community as they fight to regain their land that was taken because of monoculture, the practice of planting crops with the same patterns of growth resulting from genetic similarity.

Directors Margarita Martinez and Miguel Salazar document the Nasa’s use of peaceful civil resistance as they send a message to the government and guerrilla forces.

Eight years after the 1991 El Nilo massacre in which eleven men, five women, and four children of the NASA community were brutally murdered, the Colombian government apologized and promised reparation for the community and the families of the victims.

However, desperate after not receiving what they were promised, the community organized and moved to reclaim their land.

Using passive but illegal means, the Nasa took occupation of the farm La Emperatriz. In response, they were met with a government attack that left several members severely injured.

In a country that has survived more than six decades of internal conflict with massacres, displacements, and kidnappings, it is admirable to see the Nasa choosing civil resistance . Although the temptation to use violence was there, they always maintained a peaceful response.

The film however met with resistance and the Nasa community publicly expressed its concerns, fearing a negative impact on the indigenous process in northern Cauca.

One of the main arguments of the Communication Network of the Association of Indigenous Councils of Northern Cauca (ACIN) for protesting the film is that it focuses on only one individual—the coordinator of the Indigenous Guard at the time, who they say distorted the view of the community.

ACIN says the fundamental arguments of this particular faction are not representative of the centuries-old struggle of indigenous peoples.

In addition, ACIN expressed discontent over the original Spanish title, “Robatierras” or “Land Thieves,” raising concerns about the negative impact the name could have on the community.