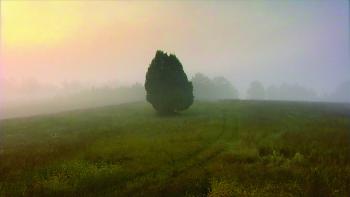 This solitary cedar tree is one of many landscapes surveyed by the narrator early in General Orders No. 9. It is a sequence that reveals a pastoral world that is both surreal and meditative. (Courtesy of Hotdocs.ca)
Entertainment

The documentary begins as a tribute to the natural beauty of the American South and its rich yet humble heritage. It gives insight into our common roots as human beings and finds both wonder and awe in the simplicity and beauty of rural life.

Through harmonious imagery, the film presents a contrast between the idyllic splendour of the countryside and the barren world of an abandoned cityscape. It views the sprawl of the urban city spreading out from the interstate as a disease, and associates it with a ghostly and haunting fate for humankind.

General Orders No. 9 uses visual symbolism and philosophical poetry to get its message across and requires its audience to be open-minded and introspective. Not for those looking for a fun night of docudrama or to mentally unwind, the documentary is an intense experience which requires audiences to develop deep insight into the meaning of the symbols and its underlying message.

“The city is not a place, but a thing. It has none of the marks of a place but that of a machine,” recounts the narrator.

If you share a deep connection with nature and can appreciate an alternative to traditional storytelling, this is the film for you. It is a real eye opener and makes one deeply ponder the direction of humankind’s modernization.

The film was met with warm applause from the audience and was followed by a question and answer session with director Robert Persons who described it as having “no agenda” and a “work of art” that is “abstract.”

Although it bends the rules of filmmaking, it does not break them as the documentary does have a definitive sense of progression. As producer Phil Walker insightfully suggests, it must be “understood as it develops.”

However, there may be some who don’t care for or are unable to follow the film’s intricate “storyline,” so be sure to visit generalordersno9.com before committing to watching it.

The Hot Docs film festival, which runs from April 30 to May 9, is showing a large international collection of documentaries in downtown Toronto. The films screened cover a countless array of themes and topics in the documentary genre.

As a showcase of both local and global talents, Hot Docs is approaching the Toronto International Film Festival (TIFF) in impact, especially as sponsorship and support continue to grow.

For more information on the festival, visit www.hotdocs.ca.