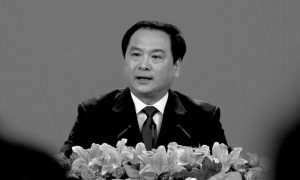 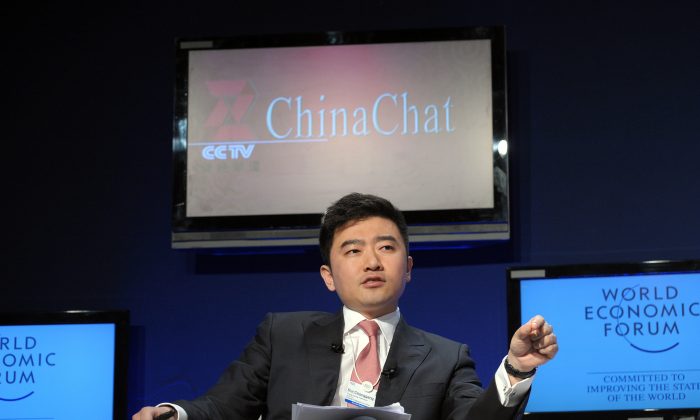 Rui Chenggang, anchor of China Central Televison (CCTV), talks during a CCTV televised debate focusing on China's growth at the World Economic Forum on January 29, 2010 in Davos. Rui was taken away by governmental anti-corruption organization for investigation on July 11, 2014. (Eric Piermont/AFP/Getty Images)
China

Host of China Central Television Taken Away for Investigation

One of the best well-known celebrity television hosts and journalists of China Central Television, the official Chinese state mouthpiece, has been abruptly hauled off the job for questioning related to a corruption investigation, according to reports.

The questioning of Rui Chenggang, a sometimes smarmy and famously nationalistic star of CCTV, comes as a purge of the ranks of CCTV seems increasingly underway.

Several top executives and former executives of CCTV’s lucrative Finance Channel were taken away for questioning by the Central Commission for Discipline Inspection on July 11. A former top political official at the station, Li Dongsheng, was also expelled from the party recently.

In Rui Chenggang’s case, there seemed to be no forewarning that trouble was imminent.

Less than an hour before his live, daily Economic News program at 8:30 p.m. on Friday, the official microblog account of the news program posted a promotional note, as usual, saying that Rui Chenggang and his partner Xie Yingying will host the show. When the program started, however, only Xie was there—the other microphone conspicuously unattended.

“The show indeed should have been hosted by both Rui Chenggang and Xie Yingying yesterday, but we couldn’t find Rui right before the show started. No one was able to get in touch with him,” said a manager at Economic News in an interview with Chinese media Caixin.

Rumor of Rui being investigated came out in early June, soon after Guo Zhenxi, the director of CCTV’s Finance Channel, was arrested on suspicions of making and receiving bribes. Rui has close personal ties with Guo, and is one of Guo’s most favored hosts at CCTV, a station staff member told Caixin. Rui’s assistant publicity manager denied the rumor that Rui was being investigated in June, and Rui wrote a post on his microblog on June 3 saying, “There are people slandering me.”

Since then, Rui started a routine post every day before his show started: “See you at the live broadcast, my friends.” But those friendly notes stopped on July 10.

As one of the most well-known faces of CCTV, Rui has over 10 million followers on China’s microblog platform Sina Weibo. He has also attracted controversy for his remarks during public events. At the World Economic Forum in Dalian in September 2011, for example, Rui asked then-U.S. Ambassador to China, Gary Locke: “I hear you flew here coach. Is that a reminder that the U.S. owes China money?”

Rui also sparked public outrage at the G20 summit in Seoul in 2010 by usurping a question meant by President Obama to be given to Korean media, with the glib remark that he represented the whole of Asia.

Rui wrote in his book, published in 2012, that “engaging in relationships is a must!” The 37-year-old has close ties with family members of a number of high-level officials, including some fallen, corrupt cadres, according to the overseas Chinese-language media Mingjing.

Along with Rui, a senior editor, producer, and deputy director of CCTV’s Finance Channel, Li Yong, and another producer were also taken away for investigation on Friday.

Having worked at CCTV for over 20 years, Li’s detention was also unexpected. Li was assigned to go to Brazil for live reporting on the BRICS Summit this week, but was detained while passing through customs at the airport on Friday, according to Caixin.

The anti-corruption “earthquake” in CCTV started since last December when Li Dongsheng, former deputy minister of Ministry of Public Security, who used to served as deputy director at the CCTV for years, was arrested for “serious violations of law.” Analysts immediately linked this arrest to the broader investigation of his mentor, the former security czar Zhou Yongkang, both of whom were actively involved in the violence, propaganda, and incitement against Falun Gong, a spiritual group persecuted in China since 1999. Li Dongsheng’s position at CCTV put him in charge of several key anti-Falun Gong propaganda tasks.

Since Li Dongsheng’s downfall, a number of staff and hosts at CCTV have been summoned, detained, and investigated, all potentially related to the investigation of Zhou Yongkang. At least five other staffs in the Financial Channel have been taken away in recent months, including channel director Guo Zhenxi, producer Tian Liwu, producer Wang Shijie, scenic director Yan Wenyu, and female host Ouyang Zhiwei, Chinese reports say.