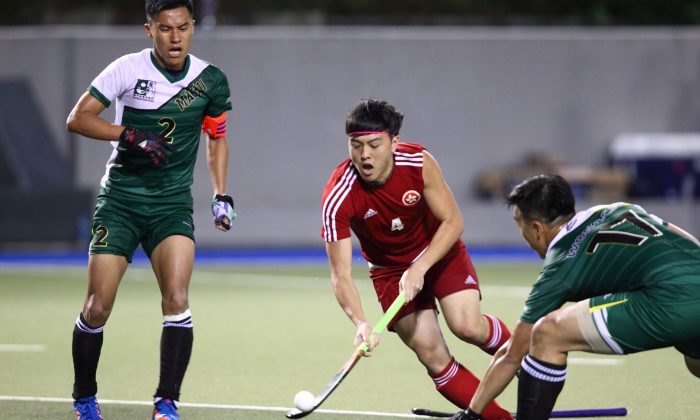 Action in the match between Hong Kong and Macau in the AHF Cup, Pool match on day 3 of the tournament. (Ernest Li)
International

HONG KONG—Hong Kong breathed new life into their title aspirations on day 3 of the tournament with an empathetic 5-1 victory over close neighbors Macau in their Pool A match at King’s Park on a rainy Monday evening (Nov 21).

With the tournament nearing the halfway mark, the direction of how the teams were going was beginning to emerge as two-time defending champions Bangladesh, also in Pool A and looking for a tri-peat, had earlier beaten Chinese Taipei on a 4-2 score line and close rivals Hong Kong on the opening day on a 4-2 note.

However, it was Hong Kong players who were to sustain the wrath of national coach Mark Kake, a former New Zealand international as he summed up by saying: “I’m not happy. We did not keep our foot on the throttle and that’s what happens.”

“We missed a lot of goal chances and we might pay for it when it comes to the goal differential,” he added. “We did not utilize the full 70 minutes and it was only in the latter part of the game did we push up a gear.

His Macanese counterpart, Jai Feng, also a former China national defender, on the other hand was satisfied with the outcome, as they had come here with the team assembled less than a fortnight earlier with hardly any training due to work commitments.

“I am satisfied as we lack the international exposure needed as compared to the other teams here and have no high expectations,” said Jai.

“We made too many unforced errors (tonight) and paid for it but our opponents pounced on them but we were lucky as they missed as many goal chances as us, otherwise the result would have been far worse,” said Jai, whose side’s average age is about 25.

For Macau this is a third defeat in a row after they lost their opening match to Chinese Taipei, 2-0, followed Bangladesh a 2-4 crash.