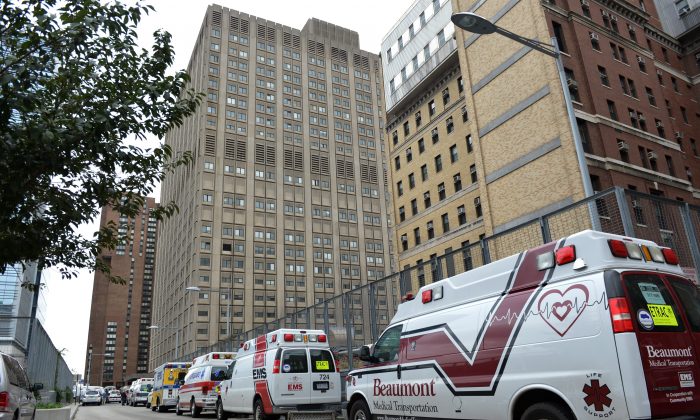 Ambulances line up prior to a planned evacuation at Bellevue Hospital in New York on Oct. 31, 2012. (Stan Honda/AFP/Getty Images)
New York

Hospitals Struggled During and After Superstorm Sandy

Hospitals were ill-prepared for the impact of Superstorm Sandy, according to a government study released Wednesday. The U.S. Department of Health and Human Services (HHS) surveyed 174 hospitals in Connecticut, New Jersey, and New York in declared disaster areas during the 2012 storm. The vast majority of hospitals–89 percent–said they had breakdowns in infrastructure and community collaboration in the aftermath of the storm.

Those breakdowns included electrical and communications failures, as well as problems with resources including fuel, transportation, and hospital beds.

Though many hospitals kept power going, some had outages that forced them to rely heavily on backup generators. A total of 69 hospitals had outages and about two-thirds had serious problems with generators. One hospital went into a blackout half an hour after water from a nearby river crested the banks. The hospital’s backup generators were high up on the 13th floor, but fuel pumps were in the flooded basement. Hospital staff were forced to form a bucket brigade to pass fuel up 13 flights of stairs until they could evacuate. The same hospital also had to decide which patients to take off of life support machines, though they didn’t have to carry out the decision.

During Hurricane Katrina, many hospitals faced similar challenges, most infamously at Memorial Medical Center in Uptown New Orleans. After the storm disabled power and running water in sweltering heat over 100 degrees, investigators found that some of the 45 bodies in the hospital’s makeshift morgue may have been put there intentionally. Many hospital staff said that a respected doctor and two nurses had given some patients lethal injections so they wouldn’t suffer a drawn-out death under the horrific conditions.

One of the greatest strains hospitals faced was in becoming defacto shelters for community residents. Though about seven percent of hospitals did evacuate, most of those that sheltered in place were the only buildings in their communities left with power. They also faced a surge of people who needed a wide range of services.

“Some hospitals had a very hard and challenging experience responding to their patients’ needs while trying to help community residents,” said Petra Nealy, a senior analyst for HHS in an interview with the department’s Office of Inspector General, which conducted the study. “A lot of residents in the community sought shelter at the nearest hospital.”

Nealy said that despite the extra burden, on the whole, “hospital emergency preparedness and response was better than we anticipated, given the size and scope of Sandy.”

Under federal regulations, hospitals have to be adequately prepared for emergencies including natural disasters. Unique challenges during Sandy, such as the strength of the storm and dense populations in hardest hit areas, put an extra strain on hospitals.

The lack of readiness to deal with that strain wasn’t a complete surprise, though.

In 2006, a government study on the preparedness of nursing homes found they either had inadequate emergency plans or failed to carry out their plans. Just before Sandy in 2012, most of the hospitals were cited for emergency-related deficiencies in a follow-up study. Most hospitals said they have since revised their plans as a result of lessons learned during Sandy.

Hospitals also said there was a surge in patients in the aftermath of the storm as other health care provider shut their doors. In some cases, that surge lasted for about four months.

Specialized health care clinics, such as dialysis centers and methadone and mental health clinics, sent patients to emergency rooms or patients sought out treatment themselves. That meant an increase in everything from people with drug problems and mental health issues to those with diabetes and hypertension. One hospital reported a surge of 600 extra patients over the four months.

Many hospitals also worried over security with the diverse influx of patients combined with a lack of available local police to help them.

One hospital said they dealt with the crisis by adding beds in the emergency department, changing private rooms to semi-private, converting the lobby to an in-patient care facility, and changing nursing areas into patient rooms. Tents were also set up outside to treat patients. Administrators said it was not enough, though, and struggled a lack of beds and going over capacity in the emergency department.

Irwin Redlener, director of the National Center for Disaster Preparedness at Columbia University and an adviser to New York Mayor Bill de Blasio on preparedness, blamed the federal government. Redlener said that federal funding to help hospitals ready for disasters has been far less than needed.

“It’s so far down the priority list for administrators that nothing gets done,” he said.

He also said some hospital procedures have been updated since Sandy, but there is confusion about who should be coordinating plans and actions among hospitals.

“You could imagine doing it in many different ways,” he said. “The worst thing is not doing it.”