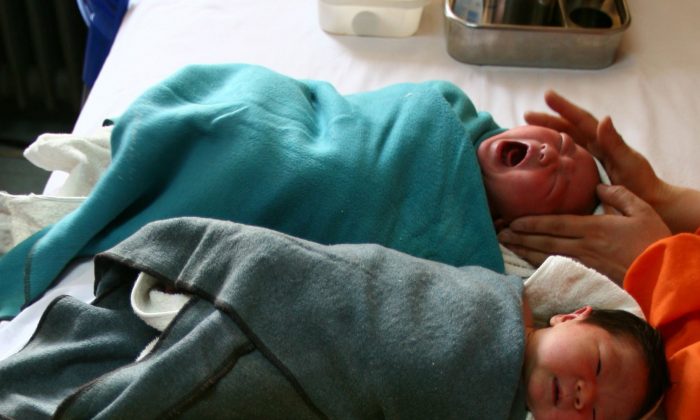 A nurse massages babies at the Xining Children Hospital in Xining City, Qinghai Province. Hospitals in Henan Province have been advertising the selling of unwanted babies, according to a report by China National Radio. (Getty Images)
China

Hospitals in central China are advertising the sale of unwanted babies, according to a report by China National Radio (CNR), an official radio station.

The reporter dialed a phone number that accompanied advertisements for the service, posted on the walls of another hospital. Under the pretense of being interested in buying a child, the representative gave the assurance that the babies were healthy and that there were many to choose from. When asked where the babies came from, the reporter was told that they had not been kidnapped, and that most of them are unwanted children from young working mothers who are unable to take care of them.

However, under the “hukou” household registration system in China, it would be difficult to ensure the child’s registration into the family record if the child was obtained through illegal means.

When asked about how to register the child under a “hukou,” the representative informed the reporter that she can provide a fake certificate from an orphanage, which can then be used to prove adoption of the child and allow the child to be registered into the family record at the Ministry of Civil Affairs.

Under China’s one-child policy, child trafficking and kidnapping is rampant because many families who have already had their first child or are unable to conceive are willing to pay for a child. Other child-trafficking victims are sold into slave labor, prostitution, or marriage. Experts estimate that as many as 70,000 Chinese children are abducted and sold each year.

The CNR reporter also discovered that most of the children in local child welfare agencies have mental or physical disabilities, perhaps a contributing factor to many families turning to illegal means to adopt healthy children.

A Zhengzhou City resident, whose relatives have bought children, told the reporter that local police are unlikely to investigate such illegal child trafficking because some families are willing to sell their children for money, and don’t report their children missing.

Though Chinese authorities have cracked down on child-trafficking rings since 2009, the phenomenon remains common. According to the Trafficking In Persons Report 2012 published by the U.S. Department of State, the Chinese state lacks comprehensive anti-trafficking laws and made minimal efforts to prevent trafficking, resulting in limited improvement. China remained a Tier 2 Watch List country for the eighth consecutive year because it did not fully comply with the minimum standards in the Trafficking Victims Protection Act.