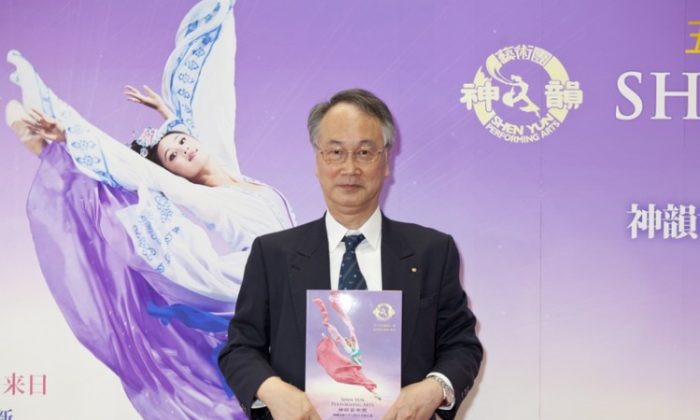 Nakayama Shigeharu at Shen Yun on May 1 at the FukuoKa SunPalace Big Hall, Japan. He was moved to tears, saying Shen Yun was a wonderful performance. (Yu Gang/The Epoch Times)
News

FUKUOKA, Japan—Against a continuous stretch of the rippling sea at the Hakata Port, Fukuoka warmly greeted the Shen Yun Performing Arts Touring Company for its final two shows in Japan.

Watching the Shen Yun performance in the afternoon of May 1 at FuKuoKa SunPalace Big Hall was Nakayama Shigeharu who said he was moved to tears.

As a hospital superintendent, Mr. Nakayama had been greatly influenced by his great-grandfather, a scholar of Confucianism. “I am very familiar with the Analects of Confucius and poems by Li Bai. Today, such a beautiful performance by Shen Yun really brings me enjoyment and has me miss the ancients,” he said.

“Each of the programs appeals to me. Perhaps due to my personal preference, I found Phoenix Fairies and The Emperor Journeys to the Moon particularly endearing,” Mr. Nakayama said.

He said he absolutely identified with the idea conveyed by Shen Yun. “Traditional Chinese culture is imparted by divinity. But if humans show no respect for divinity, but further persecute the kind-hearted, they will be condemned by Heaven. Of course, I also see Shen Yun is telling us in the face of a tragedy, divine mercy will be offered to kind persons.”

“Now, such a China, which is destroying its traditional culture, is hopeless and also heartbreaking,” he sighed.

Mr. Nakayama also enjoyed Shen Yun’s award-winning solo vocalists. He said with delight, “Absolutely well-sung, with good lyrics. Just as the tenor Tian Ge sang, ‘Don’t be blinded by money and riches / After a lifetime you leave empty-handed, all in vain.’ The words are indeed a warning from divinity; Confucius also teaches us such a lesson.”

A ‘performance with dynamic momentum, vitality and vigor’

“This is my very first time appreciating the magnificent Shen Yun performance. The entire show is full of vitality and vigor,” exclaimed Mr. Bin Inaba, Director of the Fukuoka Prefecture Friendship Alliance, after attending the New York-based Shen Yun Performing Arts Touring Company’s performance at FuKuoKa SunPalace Big Hall on the afternoon of May 1.

Born in Toyama Prefecture, Mr. Inaba started his career in the field of growing herbs during the Edo Period, as he was interested in the research of traditional Chinese medicine. He is familiar with the legendary stories about Shen Nong’s (Emperor Yan) tasting a hundred herbs, and it helps him comprehend that Yandi was the emperor who began to develop China’s ancient culture.

“I think Shen Yun is indeed really remarkable, as it is promoting human culture, the divinely inspired Chinese culture [in the world]. In fact, Japanese myths and legends have something to do with Confucianism. That’s why it is not so difficult for me to comprehend the connotations in the Shen Yun performance. Nowadays, people have striven to study evolution of the universe and explore cosmology. However, the more we study it, the more we believe that the universe was created by higher beings. As a result, it is great that Shen Yun displays that higher beings do exist in this world.”

Amazed by Shen Yun’s exquisite performance, Mr. Inaba praised Shen Yun’s artists, saying, “What a fantastic dance performance with dynamic momentum, vitality and vigor. It is indeed very touching. They would have had to put forth a tremendous effort in rigorous training. The accompaniment played by the live orchestra made the show even more touching and appealing.”

In view of the fact that Shen Yun is unable to perform in China, he said that it is because the Chinese regime’s atheism is in conflict with the divinely inspired Chinese culture demonstrated by Shen Yun. He also stressed that the values conveyed by Shen Yun is something indispensable for the Japanese as well.

He concluded by saying, “Man should live with justice and dignity.”

Ms. Ota, owner of two companies, set her busy schedule aside to go to the theater with her friend, who runs a nursing home.

Ms. Ota said that the first thing she noticed about Shen Yun was the orchestra, “It’s incredible. Most other performances use recorded music.”

Speaking about the performance overall, she said, “It’s such a great entertainment, with dancing artists, musicians from a live orchestra, and solo singers. The dancing artists look gorgeous!

“Every part of Shen Yun is admirable, and this is the first time I have ever seen such a grand backdrop animation like this.”

With state-of-the-art graphics technology, Shen Yun’s digital-backdrops team creates vividly animated settings, extending the stage and transporting the audience to a world where heaven and earth are one, according to the company’s website.

Ms. Ota said she often visits China. “I have seen dance performances in China many times. Compared to what I saw there, Shen Yun is much better and much more adorable. Shen Yun gives me a very warm, positive, and inspiring feeling.”

When Ms. Ota heard that Shen Yun was not able to be performed in China, she said, “We should be so lucky to be able to enjoy the beauty of Shen Yun now.”

Based in New York, the mission of Shen Yun is to revive China’s 5,000 years of history. Shen Yun’s three companies perform in countries around the globe, but are banned in China where communist ideology conflicts with traditional values.