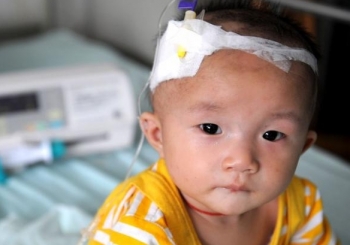 A baby who suffers from kidney stones after drinking tainted milk powder gets IV treatment at a hospital. (China Photos/Getty Images)
China

Hospital and Media Melamine Cover Up

On September 29, Xinhua news agency reported that Hebei police uncovered a network involved in the production and sale of melamine, but the Chinese communist regime’s mouthpiece omitted a fact about 64 tons of protein powder made of melamine was already mixed with China’s milk product by this network. Hospitals appointed by the local authorities concealed the illness condition of victimized children and diagnosed those who had kidney stones as normal.

70 Tons of Protein Powder Made by Melamine

According to Xinhua news agency, a lawless group in Shijiazhuang city produced protein powder containing melamine in an underground factory and sold it to milk farms and milk wholesalers.

The police have arrested 35 people and seized 222.5 kg of melamine. Xinhua states that the production and sale of melamine was the “source” of the “containmented powdered milk from Sanlu.”

On September 27, Hibei Youth Daily published an article with more detailed information about the underground factory. It stated that the “Sanlu powdered milk investigation discovered 70 tons of egg white powder produced” there.

Mr. and Mrs. Gao Junjie from Zhengding County, Heibei Province, were arrested for their involvement. Since the second half of 2007, they were found to have used 20 to 25 percent melamine, 75 to 80 percent maltodextrin, or whey powder, to produce protein powder for an exorbitant profit. Their total production that contained melamine reached 70 tons, and was sold mostly to the milk farms and wholesalers. When the case was disclosed, the police seized the remaining six tons of “protein powder” in their underground factory. This equates to 64 tons, containing at least 13 to 16 tons of melamine, have been mixed into the milk already.

According to Radio Free Asia, on September 18 Mr. Chai from Daqing City, Heilongjiang Province, and father of an infant suffering from kidney stones, indicated that his child was diagnosed to have a 0.2×0.3 sized stone in the left kidney. On September 22 when the local Sanitation Bureau arranged for 30 kidney stone infants to receive expert consultation, the result was “three to be hospitalized, and the remaining had no kidney stones.” They also refused to give the photo from the ultrasonic diagnosis result to the parents.