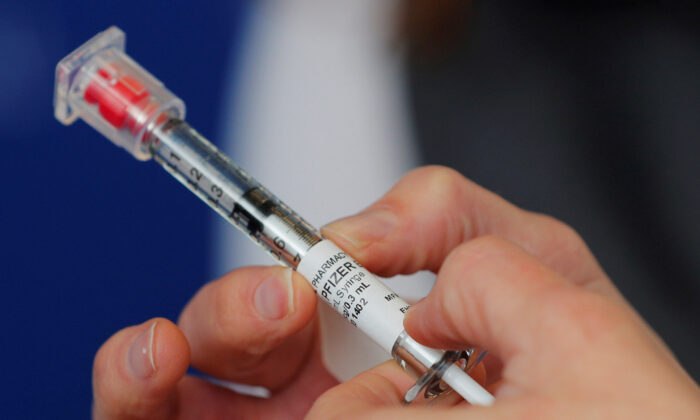 Doses of the Pfizer-BioNTech COVID-19 vaccine are ready to be administered at Brigham and Women's Hospital in Boston, Mass., on Dec. 16, 2020. (Brian Snyder/Reuters)
PUBLIC HEALTH INFORMATION

The workers at Advocate Condell Medical Center in Libertyville suffered tingling and an elevated heartrate, Advocate Aurora Health said in a statement to news outlets.

“Out of an abundance of caution, we are temporarily pausing vaccinations at Condell, which will allow us time to better understand what may have caused these reactions. We have eight other vaccination locations in Illinois and three in Wisconsin and are continuing at those sites as planned with no disruption,” Advocate said.

One of the workers was continuing to receive treatment on Friday while the other three were at home and “doing well,” the statement said.

“Reactions are an expected side effect of vaccination. We are encouraged by our team members who are eager to get the vaccine to help protect themselves and others and bring an end to this pandemic,” it added.

Advocate Aurora Health didn’t respond to a request for more information, including whether the reactions were thought to be allergic reactions.

Two healthcare workers in Alaska this week suffered adverse reactions, including a middle-aged woman who spent at least two nights getting treated.

The hospital portrayed what happened as expected and said both workers wanted their colleagues to get vaccinated.

The new vaccine is produced by Pfizer and BioNTech.

Drug regulators said late Friday that it’s investigating five allergic reactions that happened in more than one state, including Alaska.

Dr. Peter Marks, director of the Food and Drug Administration’s Center for Biologics Evaluation and Research, said a chemical called polyethylene glycol, an ingredient in the Pfizer vaccine, could be to blame.

Health officials have said people with allergies to any components of the new vaccine shouldn’t get it.

That’s in contrast to British regulators, who said anyone with a history of severe allergies to anything should not get the new vaccine.