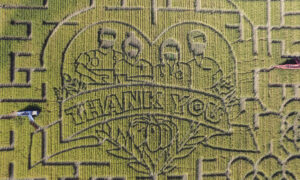 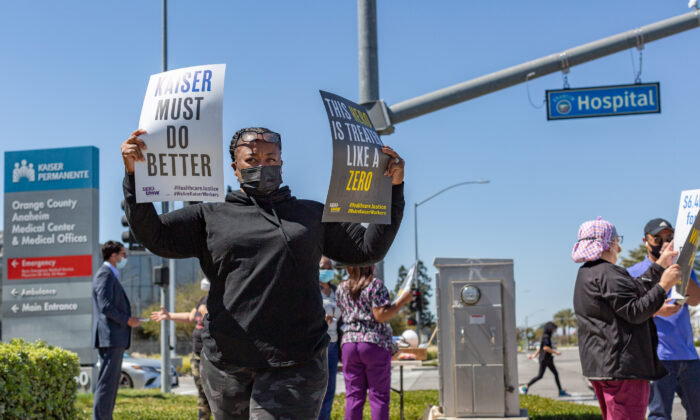 Health care workers—unhappy with the lack of compensation for their sacrifices during the ongoing pandemic—gathered in Anaheim March 24 to protest Kaiser Permanente’s lower-than-expected annual performance payouts.

The rally was among 29 held at health care company Kaiser Permanente facilities statewide.

“Kaiser Permanente had promised a hero’s bonus raise to all of their workers,” Saldaña told The Epoch Times. “They originally said that they weren’t going to penalize anybody for not meeting attendance goals during the pandemic.”

“Late last fall, labor and management leaders recognized that year-end performance bonus programs for union-represented employees could be a challenge to achieve in the pandemic,” Peasnall said in a statement. “Some unions advocated for a ‘hero bonus’. Working collaboratively with [various unions], we chose to guarantee all eligible, represented employees a minimum of a 100 percent payout of their performance sharing bonus payment.”

Surgical technician Jorge De La Cruz said that due to the hike in COVID-19 cases, many employees were forced to work with patients exposed to the virus.

De La Cruz, who normally works in the operating room, was assigned to work in the intensive care unit (ICU) at the beginning of the pandemic.

“I noticed that other coworkers that got paid a little more of the bonus because of their title, but a lot of us were on the front lines,” De La Cruz told The Epoch Times. “We’re out there like working directly with a COVID patients.

“It should be equal risk, equal pay.”

He said he felt “belittled,” as he was working in the ICU, encountering COVID-19 patients while not receiving the pay his colleagues and registered nurses (RN) received.

Sheri Lucero, an intermediate clerk who has been working with Kaiser for 36 years, said she took off a couple days from work due to the pandemic, which might have counted against her.

“Those days might have counted against me, even though they said that they didn’t,” she said.

“We don’t believe that they gave us all of that sick time with that part of the bonus.”

Omar Candia, a Kaiser mail clerk who mainly works at the docks, participated in the rally to raise awareness for the union’s cause.

“We’re exhausted and we want recognition on that,” Candia told The Epoch Times. “It’s just nonstop work, and sometimes we don’t have always enough equipment and supplies that we need in order for us to do a good job that we’re supposed to be doing here.”

Denise Ellis has been working with Kaiser for 23 years as an intermediate clerk.

She said due to the pandemic, the medical offices were closed and she and her colleagues had to work at the hospital.

“We didn’t have the PPE and we’re right in the same room as the nurses,” Ellis told The Epoch Times. “Their lives were more important than ours, which was a problem. It’s total discrimination.”

She added: “My family was scared for me to go to work because they didn’t know. I’m a single mom with three kids. They didn’t know if I was going to make it home.”

“At the very outset of the pandemic, Kaiser Permanente followed the science, CDC guidelines, and the expertise of our internal infectious disease leaders to ensure we were protecting our teams and providing safe and effective care to our members,” Peasnall said in the statement. “We secured hard-to-find PPE, brought in additional staffing, and built out new testing facilities and equipment.”

Elizabeth Saldana, an electrocardiography (EKG) technician who got sick with the virus in February, said her managers didn’t show the appropriate care for her.

“You could have been working with somebody that was exposed and they didn’t tell you,” Saldana told The Epoch Times. “You weren’t aware of [it], and then you go home you expose your family.”

Saldana went into the emergency room, and then into a 10-day quarantine.

“They call us heroes, but they don’t treat us like heroes.”

A large caravan of cars participated in the rally, honking horns in support and holding up posters.