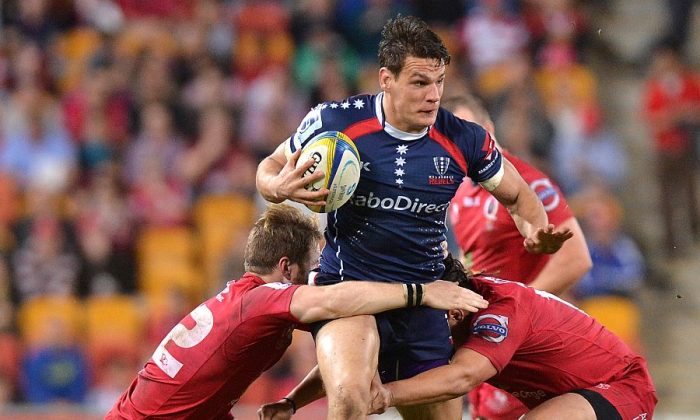 Running to victory ... Rebels centre Mitch Inman takes on the Reds during their Round 14 Super Rugby match on May 17, 2014. (Bradley Kanaris/Getty Images)
International

The once-mighty Queensland Reds have hit rock bottom—of the Super Rugby table—wracked by injury and ill-content.

Just three years ago the Reds defeated the Crusaders to win the title.

Here’s captain James Horwill’s response to Saturday’s 27-30 home-loss to the Melbourne Rebels: “In the end, once again, we were robbed by a stupid refereeing decision.”

Horwill was referring to the sending off of Reds lock Ed O’Donoghue for eye-gouging. A subsequent judicial hearing found O’Donoghue not guilty of eye-gouging, and withdrew the red card from his record.

So was Horwill right to say the officials cost the Reds the match, once again? Not exactly.

Television commentator Greg Clark said after the match: “It [the apparent gouging] was there for everyone to see.”

“Rugby was being ruined and the Reds were robbed, skipper James Horwill ranted after his side caved in once more,” Gray wrote. “Among things ruining the game are acts of foul play such as O’Donoghue …”

Rebels captain Scott Higginbotham apparently hit O’Donoghue illegally. The players then grappled on the ground, well after play had moved on.

As both players wrestled, O’Donoghue’s fingers were across Higginbotham’s eyes, in what looked like an eye-gouge.

Referee Steve Walsh was told of the incident by the video referee. After video review and consultation, Walsh sent O’Donoghue from the field.

The judicial hearing was conducted by Jannie Lubbe, who found O’Donoghue not guilty of eye-gouging for several reasons, including that Higginbotham had not complained at the time; and Higginbotham had been uninjured.

In rugby, many illegal plays are considered to be good plays, unless the player is caught. Eye-gouging is not one of those. It is forbidden not just by the rules, but by convention.

It is occasionally practised, usually at a lasting cost to the player’s reputation.

Consequently, it’s pleasing that O’Donoghue was exonerated by the judiciary.

But his actions warranted him being sent from the field, probably with a red card.

It was the last minute of the game, and the resulting penalty broke a 27-all deadlock, giving the Rebels victory 30-27.

A yellow card would have brought the same loss. As would a simple penalty.

So Horwill is wrong. The Reds weren’t robbed. They lost the game through foul play, which was foolish, at best.

Even if the match-losing penalty had been awarded wrongly, one penalty over 14 Rounds of rugby isn’t the reason the Reds are on the bottom of the table.

One question remains. Will Horwill be fined for his comments?

That aside, neither Horwill nor coach Richard Graham is showing leadership. Neither is showing resolve, or determination under adversity.

Cooper was playing his 100th match, so the loss of his experience will hurt the Reds. He runs the back-line and his player-management ability has been honed as vice-captain of the national side.

That’s before considering his outstanding skills.

Graham joined the Reds coaching staff in 2012, after quitting as head coach of the poorly performing Western Force.

The former Reds player became head coach when Ewen McKenzie left the Reds at the end of the last Super season, to coach Australia.

Under McKenzie, the Reds had contested three straight finals play-offs, winning the title in 2011.

This was the first time the Rebels had beaten the Reds.