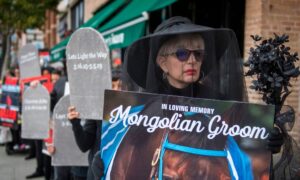 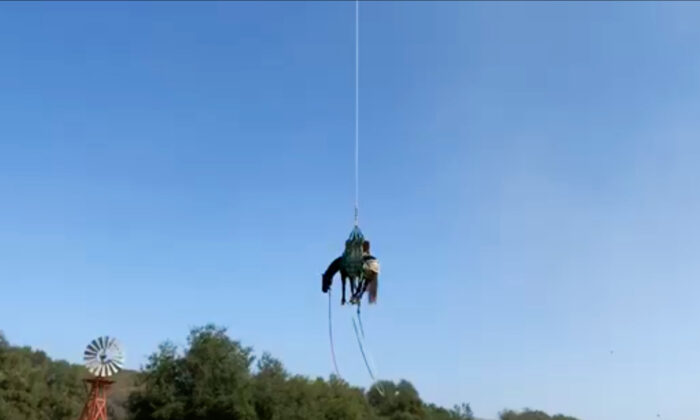 A horse was airlifted to safety by the Orange County Fire Authority (OCFA) on Sept. 21 after falling 60 feet down a ravine in a regional park near Rancho Mission Viejo, California.

A woman was riding her 8-year-old horse, Lola, on the remote trails of Caspers Wilderness Park when Lola began to buck. When the rider jumped off, Lola fell down a steep ravine—and her owner quickly dialed 911.

“Everyone on the scene was very concerned for the horse. We wanted to ensure we got her out as safely as possible,” OCFA Capt. Greg Barta told The Epoch Times.

“Fortunately, our technical rescue team and helicopters train on this sort of rescue. We were all very happy to be able to reunite Lola with her owner.”

Barta, the OCFA’s public information officer, arrived on the scene shortly after the incident took place.

“Our first option was to walk the horse out. This was not possible due to the terrain,” Barta said.

That’s when OCFA opted to call in the helicopter.

“We had a vet come to the scene and sedate the horse, so we could safely use our helicopter to hoist and carry the horse to a safe location, to our waiting technical rescue team members,” Barta said.

“We then used our helicopter to hoist personnel on the ground, including the vet, to a safe location.”

Neither the horse nor the owner suffered any major injuries, Barta said.

“We actually train for large animal rescues like that,” Nguyen said. “It’s not the first time they’ve done it.”

“If you’re out there by yourself … obviously bring a cell phone that is fully charged,” Nguyen said.

“Some of those locations are pretty remote that you don’t have any cell service, so it’s always good practice to have somebody be aware of where you’re at and when you’re supposed to be back.”

Orange County Sheriff Don Barnes said during an Aug. 26 press conference that there had been a 225 percent increase in the number of “remote rescues” in the county compared to the same period over the last two years. The rescue operations threaten fire relief efforts by diverting needed helicopters.

“The combination of an increase in the number of hikers and the excessive heat we have been experiencing has led to a record number of search-and-rescue calls in Orange County,” Barnes said at the time.