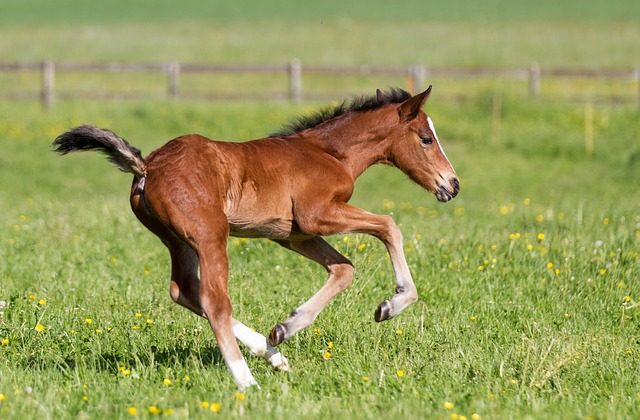 While horses don't "dance" in the wild, they definitely love to jump around
Trending

A video shows baby draft horses, or foals, with their mother just days after birth.

According to Robert Piessens, the uploader, the type is a Belgian draft horse, and she gave birth to twins.

The family of horses is seen bonding less than a week after the delivery.

Next, a small girl is seen approaching the foals in clear view of the mother before petting it.

Some users were impressed by the scene.

“That was a smart girl to go up and be noticed by the mother first. I would have ran right up to the foals and startled the mother,” one person wrote.

Added another, “I love it when people put foals on meadows immediately, makes them so much more relaxed in the future.”

A third said, “When I was a little girl my grandparents had a horse farm. in summer vacations I was at their place. And my grandfather would wake me up at dawn and we would feed them brush them and take care of them. I miss those days so much!. I will always keep a special place in my heart for these beautiful creatures! god bless all animals!”

And one woman explained that it is rare for the twin foals to be both healthy and at a normal weight.

She said, “It is extremely rare that both foals are healthy and at a normal weight. Normally one does and the other survives or dies. But this is an awesome raredy.

The handsome foal’s unusual white horse-shaped marking runs from his left front leg and up to his mane. The marking on his mane is such a beautiful work of art that he was given a fitting name—Da Vinci.

Called Vinny for short, this foal was born on May 27, 2015, at the Fyling Hall School’s stables in North Yorkshire, United Kingdom.

The school’s riding instructor, Wendy Bulmer, had bought his mother—a pretty chestnut mare named Katie—at a local horse sale in September 2014. She purchased Katie for the children to ride on.

Bulmer had no idea that Katie was pregnant until after winter when she noticed the mare was rather fat. And on Wednesday, May 27, 2015, Katie finally gave birth to a gorgeous foal.

“It’s a boy! At 5am on the 27th of May we welcomed the newest member of the Fyling Hall family. He is lively and large and is already keeping our riding mistress, Wendy Bulmer, on her toes!” read a blog post published on Fyling Hall School website.

This foal was born with his own perfect white shadow http://t.co/L4h7r8QD06 pic.twitter.com/2O9sUTtK00

“There is no way to identify who the father is but he must have had a lot of quality because Da Vinci is such a fine boy. He is the most adorable colored foal with exceptional markings,” Bulmer said in another blog post.

Li Yen contributed to this article