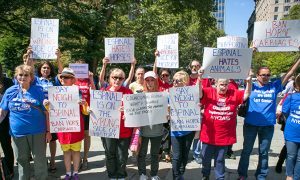 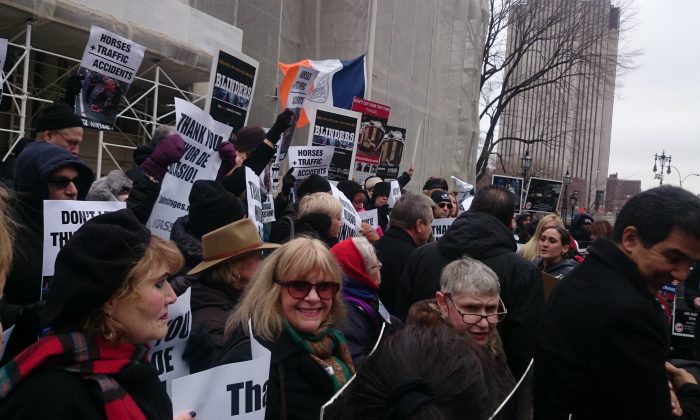 Supporters of a new bill to ban horse-drawn carriages in New York were celebrating on the steps of City Hall the morning of the legislation’s introduction.

“Animals do not belong on the streets of New York City, plain and simple,” said Daniel Dromm, the Queens Council member who is sponsoring the bill. Transportation chair Ydanis Rodriguez and Lower Manhattan Council member Margaret Chin have also signed on to co-sponsor the legislation.

The bill includes a provision to provide the 300 drivers and stable workers other employment opportunities. One option is to offer them green cab permits, Dromm said, and workforce training or even electric vintage cars, though that has not been specifically written in yet.

The bill also includes a provision to ensure the horses are relocated to suitable homes, the council member said.

American Society for the Prevention of Cruelty to Animals (ASPCA) representative Michelle Villagomez said ASPCA was committed to finding a home for all the horses and would do so by reaching out to their networks.

Bronx Council member Fernando Cabrera said that in “behind the scenes” conversations “many council members” have expressed their support for the bill. Publicly, the majority of council members are still undecided.

A similar bill was introduced several years ago by now Speaker Council member Melissa Mark-Viverito, but it did not make it to the floor.

Supporters of the bill say it is an animal rights issue, and horses should not be made to work in busy Midtown Manhattan.

Donny Moss, director of the documentary Blinders, said that horses are by nature “flight” creatures that are dangerous when spooked, both to themselves and others. They are also herd creatures, he added, and have no place to graze or interact with other horses in the city.