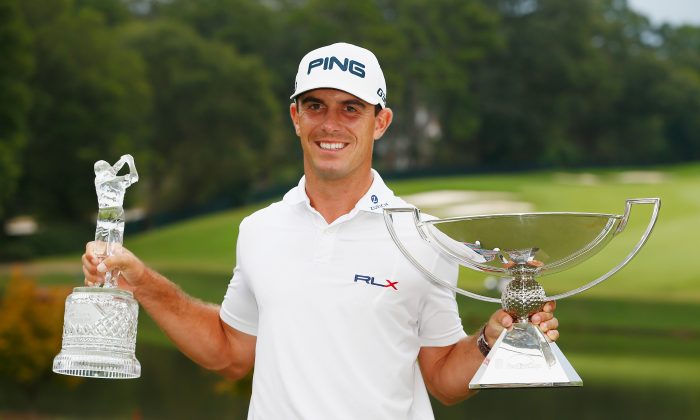 Billy Horschel poses on the 18th green after winning both the TOUR Championship and the FedExCup Playoffs at the East Lake Golf Club. (Sam Greenwood/Getty Images)
Golf

Atlanta, GA—After finishing the first two rounds at The Barclays by scoring two consective 73’s Billy Horschel was heading home after missing the cut. Instead of simply throwing in the towel for the rest of the 2014 golf season, Horschel, who had started the FedEx Playoffs ranked 69th, refocused himself the very next week for the second event of the FedEx Playoffs—the Deutsche Bank. Horschel’s play took him to the 72nd hole, a birdie would mean a playoff with eventual champion Chris Kirk. Not only did he not birdie the hole, but a chunked 6-iron bounced into the frontal wetlands and a title was lost.

Other players might have derailed but not Horschel. The next week at the BMW Championship Horschel played solid golf for the entire 72-holes and won knowing a slew of contenders were ready to pounce with any failure on his part. None happened.

This week at East Lake Golf Club in Atlanta, Billy Horschel made a major statement on his overall talent. Paired over the weekend with Rory McIlroy, the world’s number one player, Horschel out-played the Northern Irishman by taking his stellar play to an even higher level. Horschel closed out the TOUR Championship with his 12th-consecutive sub-70 round and not only won the tournament by three shots over McIlroy and surging Jim Furyk—he also snared the $10 million bonus in winning the overall FedEx trophy.

PGA TOUR Commissioner Tim Finchem told Horschel he had “performed at an all-time level” when he handed him the FedExCup and there is little question that was most certainly the case.

The interesting thing now is that Horschel and Kirk—the two hottest Americans playing now—will not be in the line-up when Team USA meets Team Europe at the Ryder Cup at Gleneagles in Scotland starting September 26. American Captain Tom Watson opted to go with Keegan Bradley, Hunter Mahan, and Webb Simpson with his three Captain choices. If those three players fail to perform at a high level in the matches, there will be a series of questions on why the selections for the USA team could not have waited till the FedEx Playoffs had finished.

For Billy Horschel, life on the golf course has certainly changed the way he is perceived. In just a few weeks Horschel and his wife will welcome their first child—a baby girl. The 27-year-old simply maintained an iron will as his play for the last three weeks has been a model for relentless ball striking and even better skills on the putting surfaces.

The contenders this week in Atlanta were in position to do much but failed when it mattered. Rory McIlroy could have added even more luster to a superb playing season with a win this week. Finishing second will not likely diminish the reality that he will be named PGA Player-of-the-Year when the award is finally announced later this year. Jim Furyk’s solid play is also a good omen as the Ryder Cup Matches is now on the immediate horizon. Furyk failed miserably at Medinah two years ago. If he can continue his overall consistent play then a reversal of fortune—for him and for Team USA—could well happen in Scotland.

Chris Kirk and Jason Day also have much to cheer. Kirk is no longer just a face in the crowd. Some in the media quickly characterized his win two weeks ago at The Deutsche Bank as just catching a groove of good fortune for just that week—far from it indeed. Day also played well throughout the four weeks of playoff events. Unable to win any of the events but being a steady presence bodes well for the talented Australian for the 2015 campaign and for his desire to earn his first major championship.

The 2014 golf season has now officially ended. Many wondered what would the golf stage be like without the likes of Tiger Woods and Phil Mickelson—the first time that both had not played in The TOUR Championship since its inception in 2007. Clearly, as the PGA Tour is famous for saying, “These guys are good.” Bill Horschel proved that emphatically. How interesting it would have been to see both him and Kirk on the American squad in Scotland. If any group is sighing a good bit of relief, its Team Europe.

Next year’s golf campaign will now feature a slew of talented under-30 performers. Can either or both Woods and Mickelson return to the fray with passion and return to top form—particularly in the game’s biggest events? Hard to say with any certainty. The golf talent train is now moving along without them. Billy Horschel certainly showed that his time is now and that his talent will likely inspire others as well.