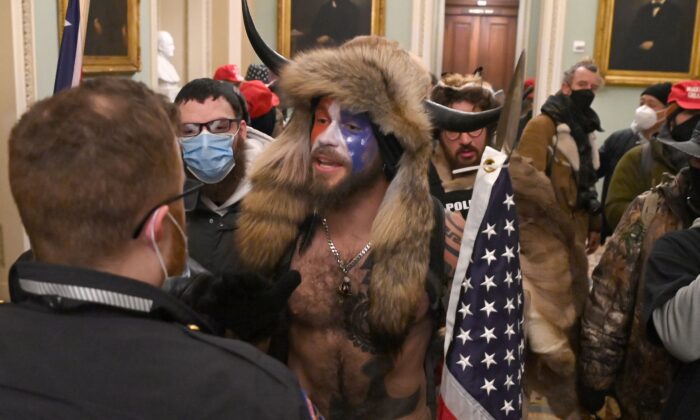 Jake Angeli (C) entered the Capitol building during a protest with his painted face and horned hat in Washington on Jan. 6, 2021. (Saul Loeb/AFP via Getty Images)
US News

The spear-wielding, shirtless man in a horned fur headdress, whose photos inside the U.S. Capitol on Jan. 6 spread widely on the internet, has not eaten since he was arrested on Jan. 8, according to his public defender and his mother.

Jacob Anthony Chansley, 33, also known as Jake Angeli, turned himself in over on Jan. 9 and made his first court appearance on Monday.

He has refused to eat food because he can only eat organic food, his mother told ABC15.

“He gets very sick if he doesn’t eat organic food—literally will get physically sick,“ Martha Chansley told the outlet.

Chansley will be provided food in accordance with his diet, a U.S. Marshall for the District of Arizona said, coming after the judge ordered the Marshall’s Office and Chansley’s defender to work on the concerns.

Martha Chansley described her son as a “patriot” and the “gentlest person I know.”

A Justice Department, in a statement, described him as wielding a spear and an American flag.

“It is alleged that Chansley was identified as the man seen in media coverage who entered the Capitol building dressed in horns, a bearskin headdress, red, white, and blue face paint, shirtless, and tan pants. This individual carried a spear, approximately 6 feet in length, with an American flag tied just below the blade,” the statement reads.

He has been charged with “knowingly entering or remaining in any restricted building or grounds without lawful authority, and with violent entry and disorderly conduct on Capitol grounds.”

Two other men were charged and taken into custody.

The man who was seen swiping House Speaker Nancy Pelosi’s (D-Calif.) lectern in a viral photo was arrested in Florida. Adam Johnson, 36, was arrested Jan. 8 by U.S. Marshals. He was identified on social media from a photo as the man who carried off the podium, while wearing a “Trump” hat and waving at the camera and smiling.

“It is alleged that on Jan. 6, 2021, Johnson illegally entered the United States Capitol and removed the Speaker of the House’s lectern from where it had been stored on the House side of the Capitol building. A search of open sources led law enforcement to Johnson, who is allegedly seen in a widely circulated photo inside the Capitol carrying the lectern,” the Justice Department said in a statement.

Also arrested was 35-year-old Derrick Evans from West Virginia. He also was taken into custody on Jan. 8.