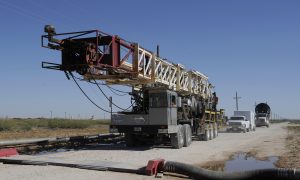 Larry Barber spent ten years testing water and fish in the Great Lakes region. But he wasn’t looking for the pollutants everyone’s heard of.

Mercury … PCBs … these are still problems. But there’s a lesser-known class of contaminants, which have insidious and concerning health impacts on aquatic creatures.

Barber, a research geologist with the U.S. Geological Survey, was looking for, and found, hormone-disrupting compounds – called alkylphenols – making it through wastewater treatment plants and contaminating rivers and fish in the Great Lakes and Upper Mississippi River regions.

Wastewater treatment plants were not originally designed to handle these compounds, widely used both commercially and residentially in products such as detergents, cleaning products and adhesives. Operators are scrambling to keep up with the hormone-mimickers gushing into their plants.

“It doesn’t matter if it’s a large urban wastewater plant, a mid-size city wastewater plant or individual septic tanks. These chemicals are present.”-Larry Barber, USGSMeanwhile, scientists fear the biologically active contaminants and their metabolites may alter the hormones of fish and other aquatic creatures, leading to reproductive, behavioral and developmental problems.

“In terms of effects, these alkylphenols are just one subset of compounds that add up to produce adverse effects,” said Alan Vajda, an assistant professor of biology at the University of Colorado. “A little alkylphenol, a little estrogenic birth control … they all add up.”

From 1999 to 2009 Barber and colleagues looked for nine compounds and their metabolites, many of which are known to disrupt the endocrine system, in the effluent from wastewater treatment plants in Duluth and St. Paul, Minnesota, Chicago, Detroit, Indianapolis and Akron, Ohio. They found all nine compounds in every plant’s effluent.

Over the study timeframe the amount discharged was fairly constant, Barber said.

This isn’t the first time researchers have found the compounds in the Great Lakes. In 2007 Environment Canada reported that the compounds were in sediment of a Great Lakes coastal wetland in Ontario and were accumulating in the tissue of local invertebrates.

Another Canadian study from 2009 tested 28 sites in lakes Erie, Huron and Ontario, and found alkylphenols distributed widely in sediments in the lower Great Lakes, with concentrations higher in sediments near larger cities.

Alkyphenols are “nearly ubiquitous,” Vajda said. “There are so many sources of these compounds in consumer products and in industrial uses and agriculture.”

It’s not always the parent compound that researchers are looking for. The compounds are partially broken down when they go through wastewater treatment plants.

However, they break down into metabolites that persist and still exhibit endocrine disrupting properties.

“They go down the drain, through the sewers, through the wastewater treatment plant, back into stream, and many are converted into more biologically active forms than what they started as,” Barber said.

Estrogenic compounds act through the estrogen receptor – and the common health impact people think of is reproduction, Vajda said. “But the roles much more diverse than that – estrogens are important to the brain, metabolism, cardiovascular health,” he said.

Barber and colleagues tested some fish in the Great Lakes region for indications of endocrine disruption. They found that a protein – called plasma vitellogenin, which is predominantly in female fish – was mostly reduced in female fish and present in males.

Responses from both sexes are indicative of endocrine disruption, Barber said.

“A lot of endocrine disruption is creating imbalances in these biological feedback systems. After exposure, females’ machinery will kind of shut down since it’s estrogen driven,” Barber said. “Male fish exposed to estrogen will produce this protein in their blood.”

When asked to comment on Barber’s findings, Tara Johnson, a spokesperson with the U.S. Environmental Protection Agency, said via email: “None of the actual results are particularly remarkable or unexpected based on past studies of this type with alkylphenols.”

Scientists have linked alkyphenols to a number of health impacts in fish.

Most of the research has been from laboratory studies, said Reynaldo Patiño, a USGS scientist and leader of the Texas Cooperative Fish and Wildlife Research Unit.

For example, Barber, Vajda and colleagues in 2010 found that minnows exposed to hormone- and alkylphenol-contaminated wastewater effluent from Boulder, Colorado, were demasculinized within 14 days.

During the research period, Boulder water officials took steps to limit alkyphenols prompting a “dramatic decrease in the compounds showing up in effluent,” Vajda said.

“In terms of effects, these alkylphenols are just one subset of compounds that add up to produce adverse effects. A little alkylphenol, a little estrogenic birth control … they all add up.”-Alan Vajda, University of Colorado“And with it, we saw a dramatic decrease in health impacts in fish,” he said, adding that this relationship suggested the alkyphenols were largely to blame for initial demasculinization.

Michigan researchers found that crayfish had severe developmental problems when exposed and concluded that the compounds pose a “serious risk to future crayfish populations and consequently food webs.”

In trout, four common alkylphenols stimulate gene expression and the growth of breast cancer cell lines, according to research from the UK’s Imperial Cancer Research Fund.

Vajda said that all of these studies are relevant for the Great Lakes fish since endocrine disrupting compounds should act similarly across fish species. He added it’s hard to pin any specific health impacts on any group of compounds since fish are exposed to a mixture of so many.

The ultimate concern is that compounds could affect fish populations. This, too, would be quite difficult to pin down, Patiño said, but it’s not a stretch to think there could be population level impacts.

“Wastewater effluent impacts individual fish. It’s not unreasonable to think if individuals are affected, including these reproductive endpoints, to expand that and project that populations are likely to be affected,” Patiño said.

It’s difficult to quantify the risk alkyphenolic-contaminated fish are to humans, said Dr. Ana Soto, a Tufts University professor and biologist, adding that what and how many fish eaten would determine exposure.

However, both contaminated fish and water represent yet another route of estrogen exposure for people.

“We’re already affected by estrogens like BPA, and we know the effects are additive,” Soto said. “In a nutshell, I can’t tell you how much endocrine disruption [in people] will increase from eating the fish in the river. But I can say there is potential, and all exposures count.”

“And we already have estrogens, now there are potentially more provided to the body from the water … and fish.”

Stopping them at the source

Alkylphenols are widespread in wastewater effluent because wastewater treatment plants simply were not designed to handle such compounds.

“The basic concept of plants was conceptualized 70 or 80 years ago when someone said ‘hey could we take natural biodegradation process in the environment, and speed it up,” said Chris Hornback, senior director of regulatory affairs with the National Association of Clean Water Agencies (NACWA).

“These plants were designed to get the stuff when you think of sewage out of water, get it cleaned and return it to environment, ” he said. “Nothing in the realm of our imagination when these processes were first conceptualized envisioned triclosan, estrogen from birth control pills, or alkyphenolics.”

There is some research into bolstering removal rates of such compounds. Hornback said that reverse osmosis, which cleans water by pushing it through membranes, seems to work best at removing emerging contaminants like alkyphenols. However, reverse osmosis is prohibitively expensive for most plants.

Other researchers have had some success at slowing down the sludge retention time, which keeps the wastewater in the portion of the treatment process where organisms are consuming organic matter. A longer holding period seems to remove more contaminants such as alkyphenols. But that’s not without problems either, Hornback said.

“Slowing everything down really impacts the overall treatment process, and changes how much capacity you can put through. There isn’t a treatment technology you can slap on and say ‘remove contaminant X or Y,” he said.

But it, too, would be “extremely expensive,” Rogacki said. “We’re talking hundreds of millions of dollars.” Rather than make such an investment, Rogacki said it makes much more sense to keep these compounds out of the sanitary system in the first place.

“If alkyphenolic compounds are causing problems in the environment, we should be working to keep them out of the sewer,” Hornback said. “The sewer is not a trash can.”

“If alkyphenolic compounds are causing problems in the environment, we should be working to keep them out of the sewer.”-Chris Hornback, NACWA

City officials at Boulder, Colorado, for example, worked with Barber and others to monitor local waterways for alkyphenols and then reach out to industries near high concentrations to educate them about potential impacts and alternative options.

Hornback said the major concern is that the EPA approves compounds and then, after environmental impacts are confirmed, will force wastewater treatments plants to deal with them

The EPA’s Johnson said the agency does not have any human or aquatic water quality standards for any of the chemicals that Barber and colleagues monitored.

Nor are there “imminent plans to develop” any standards, she added.

But voluntary reductions in chemicals can reduce their presence in the environment, Barber said.

“It’s good to get the word out. If people realize ‘Oh, I’m using products that are having an unsavory environmental impact’, and realize they have alternatives, they’ll usually turn to the alternatives.”

This article was written by Brian Bienkowski, a contributing writer for environmentalhealthnews.org. This article was republished with permission, original article here.