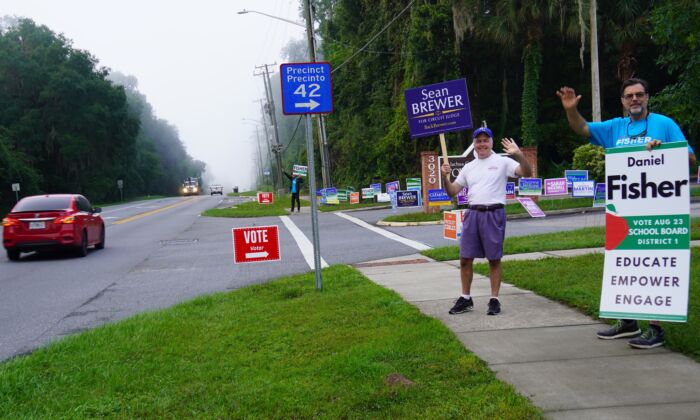 Hoping to Divorce DeSantis in the Fall, Florida Democrats Choose Between Something Old, Something New

With the heat index at 94 degrees and climbing, few voters in rural North Central Florida ventured out of their air-conditioned homes and offices to visit polling locations on the morning of Aug. 23.

At many voting sites on the outskirts of deep-blue Alachua County, people barely trickled in on Aug. 23 to cast ballots in the primary election.

Even as the expected lunchtime “rush” began, volunteers waiting to wave signs for favorite candidates had few to woo. But they carried on with painted-on smiles that belied the sweltering conditions.

The blasting heat didn’t stop 84-year-old Mary from coming in to cast a ballot at the community center in High Springs. She declined to use her full name because political discussions have threatened to sever relationships with her three beloved sons and 12 grandchildren.

“It’s torn our family apart over the last five years,” she said quietly. “I had no idea how conservative my family was, because we don’t talk politics.”

The presidency of Donald Trump exposed “their subterranean conservative attitudes,” she said, and she attributed that to their devotion to her conservative ex-husband, their late father, a military man.

Mary hadn’t been sure how to vote in the Democratic primary for governor. So she asked a trusted friend, who suggested choosing candidate Charlie Crist, a current congressman from the St. Petersburg area near the middle of the state’s Gulf Coast.

He’s got the most experience, the friend advised.

So she voted for his leading opponent in the four-candidate field of Democrats vying to take on incumbent Gov. Ron DeSantis, a Republican, in the fall. Why?

And when it was noted that she’d be the first female governor of the Sunshine State, Mary smiled.

In April, DeSantis signed a bill, passed by the Republican-controlled legislature, to prohibit most abortions after 15 weeks of pregnancy.

Fried, who bills herself as “Something New” is the state’s commissioner of agriculture and consumer services. She’s battered Crist for his long history in Florida politics.

Crist served from 2007 until 2011 as a Republican governor of Florida. Instead of running for a second term, he jumped into the race for U.S. Senate. When he appeared to be behind in the Republican primary contest, he changed his affiliation to Independent. He lost to Republican Marco Rubio.

Fried has pointed out Crist’s history of political flip-flopping, saying he used to be “pro-gun” and “pro-life.”

Crist now calls for a “woman’s right to choose” and tighter restrictions on gun purchases in the state. Fried says she’s the “only candidate who’s never taken a dime from the” National Rifle Association.

Tristan Grunder, a police officer in Gainesville, voted for Fried in the Democratic primary, too.

“I think it’s time for Something New,” he said, after riding up on a golf cart to vote. “A newer, fresher face.”

He spoke about how some candidates in this election cycle seem “recycled,” a gentle reference to Crist’s history. But he didn’t have anything against the former governor, Grunder said, adding that “he was very supportive of law enforcement.”

Indeed, Crist was such a staunch advocate of the rule of law that he was dubbed “Chain-Gang Charlie” in the 1990s. The moniker stemmed from his work as a state lawmaker to bring back the practice of chaining prison inmates together on work crews.

But when the conversation turned to the policies of DeSantis, Grunder admitted that, despite being a registered Democrat, he’s a fan of the Republican governor.

In the fall, “I’ll stick with him,” Grunder said.

He appreciates DeSantis’ support of police, including $5,000 signing bonuses built into the current state budget for all new recruits and experienced law enforcement officers coming in from out of state.

“We’ve got to get aggressive recruiting law enforcement,” said Grunder, who’s running as a candidate for the High Springs City Commission against an incumbent in the fall.

He can’t afford to work as an officer in his own community, because the pay is too low. So he commutes to a larger city.

“Across the country, recruiting is down, right now,” he said. “It’s not a job people are willing to take on. They just don’t want the scrutiny. They don’t want the stress.”

And the pay for law enforcement in many communities is far too low, he said. DeSantis is wise to think “outside the box” and fund bonuses to attract officers, he said.

So why the vote for Fried in the primary?

“To split the vote,” he admitted. Fried, he believes, would be easier for DeSantis to beat in the general election on Nov. 8.

In the past few days before the Aug. 23 primary, Crist and Fried cited different polls as evidence of their respective leads. And both loudly predicted primary wins.

But in many Florida counties, even hotter races dominated Election Day discussions.

In the City of Alachua, part of the larger Alachua County, Mayor Gib Coerper visited a local polling site to help an older friend find his way.

As he chatted outside with volunteers waving candidate signs, he said he really didn’t care about the outcome of the Democratic gubernatorial primary.

Even though he’s served 14 years as mayor in the small agriculture-based town, he’d prefer not to talk politics. But he likes DeSantis’ commitment to preserving law and order in the state.

The governor removed the Hillsborough County state attorney  on Aug. 4 because he wasn’t following the rule of law and wasn’t prosecuting crimes as he should, Coerper noted.

DeSantis didn’t face a challenger from his own party in his bid for reelection. So he wasn’t a choice for Florida Republican primary voters. He automatically advances to the fall election to face the winning Democrat.

But most area residents seemed far more focused on heated races to decide four of the county’s five school board seats, than the governor’s race, Coerper said. And rightfully so, he added.

Alachua County’s school board pushed back against DeSantis’ guidance during the COVID-19 pandemic. After the governor banned forced masking of school children, school board members defied his orders and kept mask requirements in place. That stoked fires of resentment among parents.

Relations between parents and school officials in the county continued to fester over other policies, too.

Many parents applauded the governor’s ban on teaching Critical Race Theory in schools and his ban on teaching sexual subjects, like gender ideology and sexual orientation, to students in third grade and younger. But school officials in Alachua County bristled at the new rules from DeSantis.

That strained relations between parents and school officials further.

“If I was a parent again, I would be scared to death” to send a child to school, Coerper said. “And I’d be mad as heck.”

“Parents should be guiding the kids” on those topics, he added, “not the schools.”

School board members in Alachua County responded to the skirmishes by dramatically cutting time for public comment at meetings.

The divide between the school district and parents widened, as parents demanded more transparency.

Fed up with left-leaning policies, many conservative parents worked together to persuade the board to fire the district’s school superintendent in an unexpected 3-2 vote.

School boards officially are nonpartisan. But Alachua County’s school board election exploded into a vicious fight during this midterm election cycle, spawning Facebook spats, thefts of candidate signs, and visits by law enforcement to sort out volunteer misdeeds at early voting locations.

But voter turnout was so low on Aug.23  that the ambience at volunteer Steven Ward’s post was peaceful. He’d spent about 50 hours over the past few months helping school board candidate Daniel Fisher reach voters.

He smiled, waved, and held a campaign sign so that it could be seen by passing drivers. Many offered encouraging horn honks and returned his cheerful wave. He hoped his investment of time would make a positive difference in the community.

“I’ve been friends with him for a number of years, and he’s just such a great guy,” he said of the school board candidate.

“He’s very informed, and stays up on all the issues. He’s been a teacher. He’s a retired veteran.

“He’s a very sharp guy, who moved here over a year ago, and he just wants to make sure the school systems are reflective of the parents in the district, and really empower the parents to educate their children, and do the right thing, make the hard decisions.”