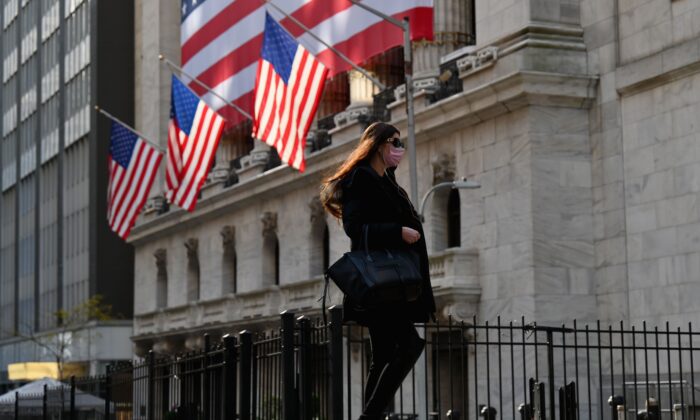 A person walks past the New York Stock Exchange on Wall Street in New York on Nov. 16, 2020. (ANGELA WEISS/AFP via Getty Images)
Markets

WASHINGTON—Wall Street rallied early this week after a second coronavirus vaccine candidate showed promise. While the U.S. economy is still in a “deep hole” as the country heads into the winter with an increase in COVID cases, a wide distribution of a vaccine in 2021 would boost economic and labor market recovery, economists say.

The Massachusetts-based biotech firm Moderna Inc. announced on Nov. 16 that a preliminary analysis indicated its coronavirus vaccine was 94.5 percent effective. On Nov. 9, Pfizer with its German partner BioNTech said its vaccine candidate was 90 percent effective against the virus.

Both companies expect to receive emergency authorization from the Food and Drug Administration (FDA) for their vaccines and ready millions of doses to ship in the United States by the end of this year.

Vaccine news is “extremely encouraging,” as preliminary data from both trials “suggest we will soon have safe and effective vaccines available,” Roger Klein, a physician and former adviser to the FDA and the Department of Health and Human Services (HHS), told The Epoch Times.

He said the Trump administration “deserves enormous credit for the unprecedented and extraordinary speed with which these vaccines are coming to market.”

The White House and the HHS implemented in May a strategy called “Operation Warp Speed” to accelerate the development, manufacturing, and distribution of COVID-19 vaccines by providing large financial support and regulatory efficiencies to vaccine developers.

Despite encouraging news on the vaccine, Federal Reserve Vice Chair Richard Clarida warned on Nov. 16 that the U.S. economy was still “in a deep hole” due to challenges posed by winter and rising infection rates. According to the central bank, the economy needs further support from both monetary and fiscal policy.

Positive news on vaccine efficacy, however, has removed some of the uncertainty around the economic outlook for next year.

Morgan Stanley this week made a substantial upgrade to its economic forecasts for 2021, expecting 6 percent growth in the gross domestic product (GDP), compared to the consensus estimate of 3.8 percent and the Fed’s forecast of 3.4 percent.

Broad-based dissemination of a vaccine starting in spring of 2021 would propel economic recovery and bring the unemployment rate down, according to Ellen Zentner, chief U.S. economist at Morgan Stanley.

“The vaccine encourages increased labor force participation, while a faster pace of economic output creates plenty of space for new entrants into the labor market,” she said in a report.

Morgan Stanley forecasts that the unemployment rate will drop to 5.1 percent by the end of next year from its current level of 6.9 percent.

The labor market recovery has been resilient in recent months. Through October, the U.S. economy recouped more than half the jobs lost from the pandemic between March and April.

“We expect the rising threat of COVID-19 to dampen growth through the first months of 2021, but the baseline level of activity created by momentum through the fall is enough to sustain the economy and lift our GDP growth forecast,” Zentner said.

Downside risks to these projections are: broader-than-expected shutdowns over the winter due to increased infections, and delays in vaccine distribution. These risks could thwart economic activity and cause greater permanent job losses in sectors hit by the pandemic.

Recent data releases point to ongoing improvement in economic activity in September and October. S&P 500 companies are also reporting better-than-expected results in the third quarter. A record-high level of companies (84 percent) reported earnings better than estimated by Wall Street. In aggregate, companies reported earnings that were nearly 20 percent above expectations, according to FactSet, a data provider.

Despite historically high levels of volatility, the U.S. equity markets endured the disruptions caused by the pandemic, economic slowdown, and political uncertainty this year.

Record-low interest rates have made stocks attractive options for investors. The latest developments on vaccines, however, have left them wondering whether it’s a good time to invest in sectors hit hardest by the pandemic, such as office, travel, airlines, and energy.

“There’s a tug-of-war between the vaccine news and the global uptick in COVID-19 cases and increasing strictness of containment measures,” Sameer Samana, a senior global market strategist at Wells Fargo Investment Institute, told The Epoch Times.

“Investors know it’s only a matter of time before a vaccine is widely available, but it’s hard to discern what the economic path looks like between that time and now, which is leading to volatility,” he said in an email.

That’s why markets have been “rotating back and forth between stocks of companies more oriented to working from home and those that will benefit from a return to the office/travel.”