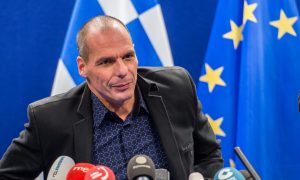 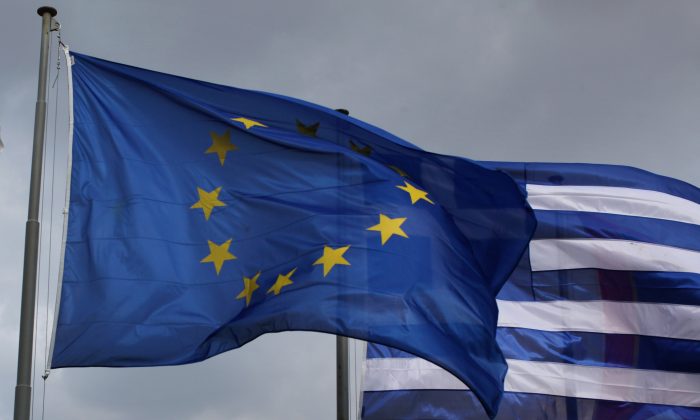 The EU and Greek flags fly in front of the Parthenon on the Acropolis on February 17, 2012 in Athens, Greece. (Oli Scarff/Getty Images)
Europe

Hopes Low Over Greece Bailout as Officials Prepare to Meet

LUXEMBOURG—Optimism was in short supply over the prospects of a deal Thursday that might prevent Greece’s bankruptcy, as officials gathered for a keenly awaited eurozone finance meeting.

With Greece fast approaching a potential default on June 30 and amid signs that Greeks are withdrawing money from their banks, officials acknowledged that a Greek exit — or Grexit — from the euro was now being discussed.

Pierre Moscovici, the European Union’s top economy official, said the eurozone meeting will be “very difficult” but that he hoped everyone turns up “with cool heads and the political will to succeed.”

Talks Collapse as Greece Digs in on Anti-Austerity Demands

Reiterating that the EU’s executive arm will do what it can to get a deal, he acknowledged that talk of a Greek exit from the euro was being discussed by some.

“The stakes are extremely high for the Greek people and all of Europe,” he said in Luxembourg.

Greece’s radical left-led Greek government has been locked in discussions with its international creditors since its election in January over what economic reforms and budget cuts it needs to make to get the remaining 7.2 billion euros ($8.2 billion) available in its bailout fund.

It needs that money to pay upcoming debts — first and foremost 1.6 billion euros due to the International Monetary Fund at the end of the month.

While Europe’s finance ministers were preparing for their discussions, Greek Prime Minister Alexis Tsipras was traveling to Russia to meet President Vladimir Putin — a visit that has prompted speculation Greece could be seeking Russian loans.

The blame game over the impasse in Greece’s talks has gotten louder in recent days, with both sides claiming they’ve gone a long way to secure a deal. Tsipras has been adamant he won’t back any deal that cuts pensions while European officials say they’ve made compromises to meet the Greek government’s demands. For example, they dropped a budget surplus target from 3 percent of GDP to 1 percent this year.

Belgian Finance Minister Johan Van Overtveldt said any progress depends on the Greeks and that “reasonable proposals” will be discussed. However, Greek Finance Minister Yanis Varoufakis said earlier this week he wouldn’t bring any new proposals to Thursday’s meeting.

The stalemate has become an increasing concern across financial markets as investors fret about the potential implications of a Greek default and exit from the euro. The Bank of Greece warned its own government on Wednesday to get a deal done quickly, or Greece would face an “uncontrollable crisis” that might jeopardize the country’s membership in the European Union.

Greek shares were down again Thursday, with the main Athens index 2.5 percent lower. The Stoxx 50 index of leading European shares, meanwhile, was down 0.7 percent.

Hours ahead of the eurozone finance ministers’ meeting, German Chancellor Angela Merkel pressed Greece to deliver on commitments to carry out reforms, saying it’s up to leaders in Athens to show the will to reach a deal.

Merkel, whose country is a key supplier of rescue loans and Europe’s biggest economy, said Greece’s government in February “committed itself to comprehensive structural reforms. These must now be tackled with determination.”

“Germany’s efforts are directed to Greece remaining in the eurozone,” she stressed. She reiterated that “where there’s a will, there’s a way — if the political leaders in Greece show this will an agreement …. is still possible.”

Merkel also said that “Greece has enjoyed an unprecedented amount of European solidarity in the last five years.” Since Greece was locked out of international bond markets in the spring of 2010, it has relied on bailout funds from its partners in the eurozone and the IMF.

In return for the 240 billion euros in loans, the country has had to enact deep spending cuts and tax increases as well as economic reforms.

The radical left Syriza party was elected on a promise to end such austerity, which it blames for the calamitous state of the Greek economy.

Barring a modest recovery in 2014, the Greek economy has shrunk by a quarter since its financial crisis began, while unemployment and poverty have increased dramatically. The country’s public debt burden has actually grown and now stands at near 180 percent of national income.