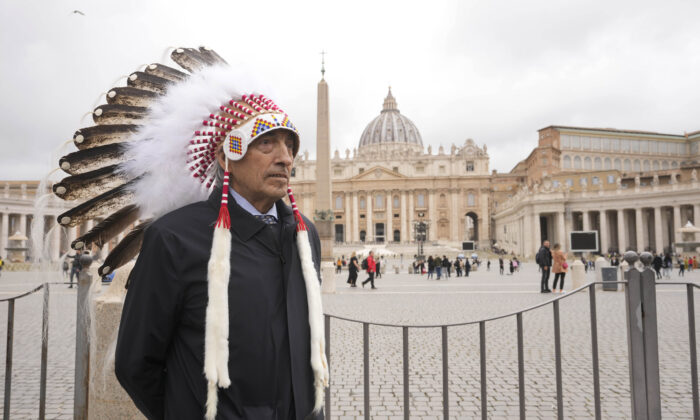 Former national chief of the Assembly of First Nations, Phil Fontaine, stands outside St. Peter's Square at the end of a meeting with Pope Francis at the Vatican, on March 31, 2022. (Andrew Medichini/AP Photo)
Canada

First Nations chief Gerald Antoine said Thursday that the meeting with Pope Francis at the Vatican marks the beginning of a partnership, as Canadian indigenous communities call for an official apology from the Catholic Church over residential schools.

“We very much hope that these discussions will be the beginning of continued dialogue and partnership in which we can learn from the past and share our vision for a hopeful future,” the Assembly of First Nations (AFN) delegation lead said in a press conference on March 31 after meeting the pontiff.

The meeting with the head of the Roman Catholic Church lasted for close to two hours, exceeding the originally scheduled time of one hour.

Antoine, who is the Dene national chief-elect and AFN regional chief of the Northwest Territories, called on Pope Francis to revoke two-centuries-old papal decrees issued in 1455 and 1493, in which the church gave blessings to explorers on colonial expeditions.

The delegates also urged the pontiff to travel to Canada to apologize for the church’s role in the construction of the Indian residential school system.

While Pope Francis has not committed to an apology or a trip to Canada, Fontaine said it has been suggested that the Holy Father could travel this summer.