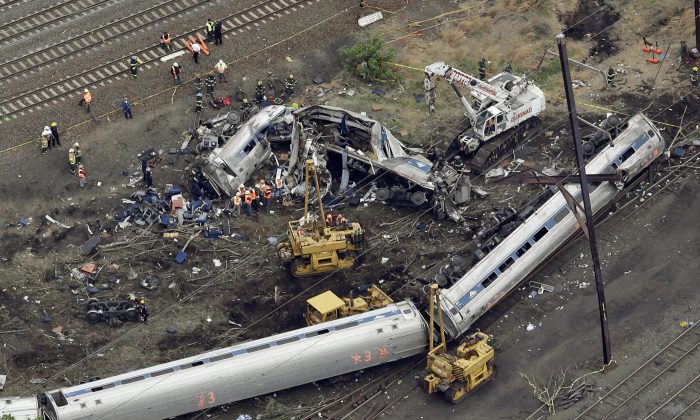 Emergency personnel work at the scene of a Tuesday night derailment in Philadelphia of an Amtrak train headed to New York on May 13, 2015. Federal investigators are expected to release interview transcripts, locomotive data and other evidence Monday, Feb. 1, 2016, that could help clear up the mystery of why the train streaked into a sharp curve at double the speed limit. (AP Photo/Patrick Semansky)
US

Hope for Answers as Release of Amtrak Crash Evidence Nears

PHILADELPHIA—Eight months after a deadly Amtrak derailment, federal investigators are poised to release evidence and reports that could help clear up the mystery of why the train streaked into a sharp curve at double the speed limit.

The release, expected Monday, will be the first major development in the investigation since a preliminary report a few weeks after the May 12 crash in which the National Transportation Safety Board pinpointed excessive speed as a key factor. A final report isn’t expected for months.

The train was accelerating out of an 80 mph speed zone when it should have been slowing to 50 mph for the coming curve, investigators said. It reached 106 mph just before the engineer activated emergency brakes.

David Hernandez, who lives near the tracks, said the crashing train sounded like shopping carts smashing together.

“They go so fast up there,” Hernandez said.

But why, with more than 300 northbound Amtrak trains safely navigating the curve every week and scores more from Philadelphia’s commuter rail, did Train 188 speed to a derailment that left eight dead and more than 200 injured?

In the absence of an official conclusion, several theories have emerged.

Positive Train Control Could Have Prevented Amtrak Derailment, but It’s Not Quite on Track

Early in the investigation, the NTSB focused on whether the train had been hit with a rock or other projectile minutes before the crash. The left-side of the locomotive’s windshield had a grapefruit-sized fracture. The operator of a commuter train running along the same tracks reported being hit and passengers on another Amtrak train said something struck their train.

Did Bostian, who encountered exhausting mechanical problems on his earlier trip from New York to Washington and a shorter than expected break, lose track of where he was?

The NTSB said Bostian’s cellphone wasn’t in use, but could he have been using a burner cellphone to get around a ban, as has happened in some cases?

Or, perhaps the ACS-64 locomotive—far more powerful than the other model primarily used on the Northeast Corridor—accelerated faster than Bostian, who had only been on the route for several weeks, anticipated.

“The only person that really knows for sure is the guy who was sitting in the cab of that locomotive,” said David B. Clarke, a railroad expert at the University of Tennessee.

Even that may not be the case: A few days after the crash, the 32-year-old Bostian told the NTSB he did not recall anything after ringing the train’s bell as he passed through the North Philadelphia station about three miles before the curve.

Bostian’s lawyer, Robert Goggin, offered a different account the day after the crash, telling ABC News that Bostian recalled that the train was “pulling into speed-restricted track” but did not remember activating the emergency brake. He said Bostian wasn’t under the influence of drugs or alcohol.

Goggin has not returned repeated messages from The Associated Press.

Bostian, regarded by friends for his safety-mindedness and love of railroading, is on unpaid leave from Amtrak.

The Associated Press visited Bostian at his parents’ vacation home in Arkansas in late December. He said he couldn’t speak about the accident while the investigation was pending, citing instructions from a lawyer.

Amtrak installed an automatic speed control at the Philadelphia curve within days of the derailment, as it had in Boston in 1990 after a train entered a 30 mph curve near Back Bay Station at 76 mph and derailed into a commuter train. The railroad has since enabled speed technology for all but a small portion of the 450-mile Northeast Corridor.

The lack of clarity on what caused the Philadelphia train to speed has frustrated crash victims, some of whom have racked up more than $1 million in hospital bills and are continuing to rehabilitate from injuries.

The train’s conductor, Emilio Fonseca, was in the bathroom of the first passenger car—turned into a mangled husk by the derailment—and suffered a deep head wound and broken bones along with significant emotional trauma that may keep him from returning to work.

Chef Eli Kulp, made a quadriplegic by the crash, has had to adjust to the “new normal” of life in a wheelchair, said his lawyer, Benedict Morelli.

They are among dozens of victims suing Amtrak for a share of $295 million in damages, raised by Congress last month from $200 million. Amtrak has conceded responsibility for the crash, but the cases likely won’t be settled until after the NTSB investigation is complete—leaving victims on the hook for medical costs until then while they grapple for answers.