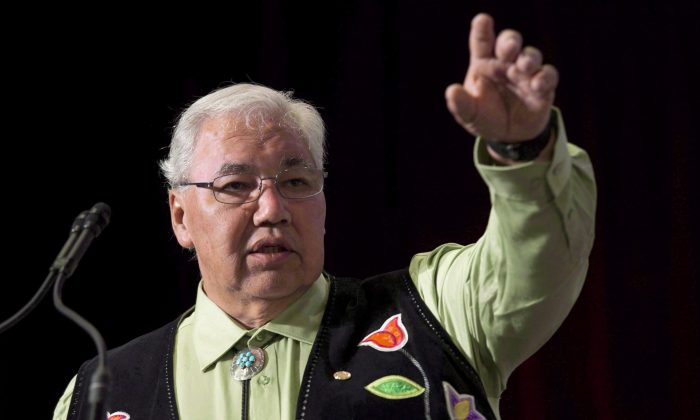 Truth and Reconciliation Commission Chair Justice Murray Sinclair during closing events for the commission in Ottawa on June 1, 2015. Now a senator, Sinclair says getting rid of tributes that are considered offensive to Indigenous Peoples would be counterproductive because it smacks of anger, not harmony. (The Canadian Press/Adrian Wyld)
Canada

Over half of Canadians oppose removing John A. Macdonald's name from schools, new survey finds
By Joan Delaney
biggersmaller
Print

Tearing down tributes to historical figures would be “counterproductive” to reconciliation efforts between Indigenous and non-Indigenous people, says the former chairman of the Truth and Reconciliation Commission.

Sen. Murray Sinclair, who spent six years documenting the long-standing impacts of Canada’s residential school system, says the debate over whether to remove Sir John A. Macdonald’s name from Ontario elementary schools takes up time that could be better spent exploring how to honour and elevate Indigenous heroes.

“It is not about taking off names off buildings, it is about whether we can find a way to put Indigenous names on buildings,” Sinclair said.

“The problem I have with the overall approach to tearing down statues and buildings is that is counterproductive to … reconciliation because it almost smacks of revenge or smacks of acts of anger, but in reality, what we are trying to do, is we are trying to create more balance in the relationship.”

Last week, the Elementary Teachers’ Federation of Ontario passed a motion stating that Macdonald’s name should no longer be displayed on schools in the province because of his support for Indigenous assimilation through the residential school system.

The union urged removing Macdonald’s name, calling him an “architect of genocide against Indigenous Peoples.”

“He clearly attempted to eliminate Indigenous culture by removing children from their families and placing them with people of another race … for the purpose of wiping out the race of people known as Indian.”

He said Macdonald also created circumstances that fuelled hardship for Indigenous people to the point where their potential to survive was challenged.

It is not about taking off names off buildings, it is about whether we can find a way to put Indigenous names on buildings.
— Sen. Murray Sinclair

According to a new survey, more than half of Canadians are against removing the name of Canada’s first prime minister from public schools.

Fifty-five percent say they oppose such a move—fully twice as many as the 25 percent who say they support it, according to the survey, which was released by the Angus Reid Institute and polled 1,512 people across the country.

Opposition differed along political lines. Past Conservative voters were almost twice as likely as past NDP voters to oppose removal—76 percent versus 41 percent. Past Liberals occupied the middle ground, with 56 percent opposing removing the name. Macdonald was a Conservative MP.

Despite his flaws, Macdonald is one of the primary reasons modern Canada came to be. He brought the provinces together to form a confederation in 1867, oversaw the building of the Trans-Canada Railroad, and was instrumental in building the nation’s economy through the National Policy, among other notable achievements. His political career spanned almost half a century.

Nine out of ten survey respondents said a person’s entire life and principal legacy should be used to decide on the naming of public monuments.

The debate comes as Canada’s memorialization of some historical figures is being questioned against the backdrop of tensions over the legacy and role of historical monuments south of the border, where protests and counter-protests over Confederate statues have turned violent.

In Halifax, Indigenous activists are calling for the removal of the statue of Edward Cornwallis, a governor of Nova Scotia who founded Halifax in 1749 and has been credited with building the province. Cornwallis issued a proclamation offering a cash bounty to anyone who killed a Mi’kmaq person, and Mi’kmaq activist Elizabeth Marshall has called the statue a “genocidal symbol.”

Indigenous groups also want Ryerson University renamed because the university’s namesake, Egerton Ryerson, a Christian minister and educator, played a role in the creation of the residential school system.

“It was Sir John A. Macdonald who said that you needed to separate kids from their parents or otherwise you’re just going to have an educated savage that can read and write,” Thomas told CTV News Channel.

“We don’t need to venerate and honour these individuals any longer.”

Ontario Premier Kathleen Wynne is among several current and former politicians who have spoken out against the union’s proposal, saying that although Macdonald was “far from perfect,” removing his name “missed the mark.”

“Certainly his decision to open residential schools was among the most problematic in our history,” she said in a statement, but noted Macdonald was part of the country’s history, good and bad.

“We need to teach our children the full history of this country—including colonialism, our Indigenous peoples and their history, and about what our founders did to create Canada and make it the country it is today. … We need to understand our history, the good along with the bad.”

Trudeau said earlier this week, however, that the government has no plans to remove Macdonald’s name from properties that are under federal responsibility.