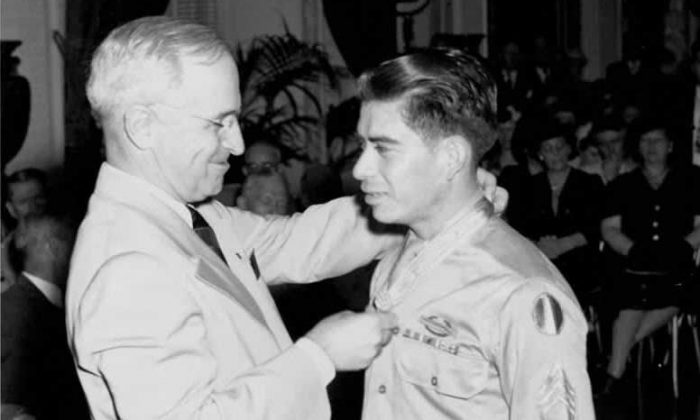 America is a land of immigrants who enrich our nation with their talents, sacrifices, and character.

Immigrants represent the ideals, principles, and freedom of our country and are represented by our families, neighbors, and heroes.

Prior to sharing these words, I held in my hands a document very sacred to me. It is a detailed copy of my family tree, complete with names, dates of birth as well as deaths where applicable, and a meticulous layout of the connections between each family member.

Immigrants represent the ideals, principles, and freedom of our country and are represented by our families, neighbors, and heroes.

Adjacent to his name is the name of his wife, my great grandmother Gaetiena, who was born in 1875 and died from Spanish Influenza in 1918 at the age of 43.

Both of my great grandparents were immigrants and representative of millions who came to America, beckoned by the words inscribed at the base of the Statue of Liberty: “Give me your tired, your poor, Your huddled masses yearning to breathe free, The wretched refuse of your teeming shore. Send these, the homeless, tempest-tost to me, I lift my lamp beside the golden door!”

Joseph and Gaetiena had the fire of America’s greatness in their souls, inspired by our nation’s promise of “life, liberty, and the pursuit of happiness” memorialized as inalienable rights. This promise is the heart of our Declaration of Independence, one that demands protection by our government and respect for human dignity.

The Bronx: A Melting Pot

Although privileged to have had outstanding educational credentials, I believe growing up in the Bronx with the richness of its diversity deserves notation on a curriculum vitae.

This experience allowed the world to be at my doorstep, expressed through countless encounters with classmates, friends, neighbors, and the community.

My neighborhood was a melting pot with international representation. It was filled with people of every conceivable religion, culture, and language.

The goodness of these people, exemplified through their smiles, courtesy, and countless acts of charity, is eternally etched in my memory.

During one of my career experiences, I managed security professionals for over 12 years at sites demanding extreme professionalism, vigilance, and commitment.

Before employment, these security professionals, many of whom were immigrants, went through a rigorous hiring procedure that included meticulous review of government credentials, federal and state fingerprint checks, previous employment verifications, an integrity exam, and drug testing.

I personally interviewed and conducted checks of these requirements for hundreds of security personnel and then assigned them to secure some of America’s most well-known clients. These clients represented corporate and residential properties, banks, hospitals, the media, and retail enterprises.

A world map was proudly maintained in my office with pins representing these security professionals who were from around the world.

These officers, many of whom were eventually promoted to positions as supervisors and managers, protected property, people, and information. They provided leadership during critical emergencies including evacuations. Essentially, they protected our homeland, with many receiving commendations at award ceremonies for exemplary conduct, meritorious actions, and outstanding service.

America must be forever grateful for the many heroes who died serving our nation, including those not born on our soil.

Over 20 percent (over 700) of Congressional Medal of Honor recipients in U.S. wars have been immigrants.

The official guide to this medal notes, “Those who have received the Medal of Honor since it was established in 1861 as the nation’s highest decoration are as different as the melting pot of our country.”

America must be forever grateful for the many heroes who died serving our nation, including those not born on our soil.

One recipient was Macario García from Mexico who, after recovery from a D-Day wound, single-handedly took down two enemy machine-gun nests on Nov. 27, 1944.

Only after protecting his unit from this danger, despite having been shot in the shoulder and foot, did Macario allow himself to be evacuated for medical care.

Today, there is a frenzy of emotion over immigrants and the role America must play with this issue that involves the security of our borders.

Solving this issue is achievable and critical for reawakening the nation. But the fact remains that America is a great land because of the values, vision, and service of countless immigrants.

Immigrants are our families, neighbors, and heroes and we must be forever honor their contributions to America.