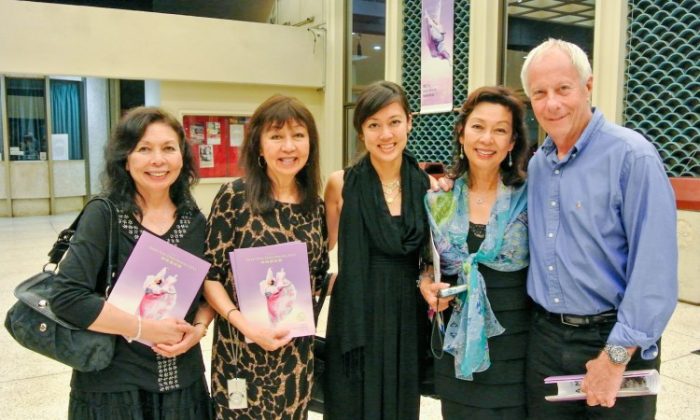 “I loved the show—loved all the beautiful costumes, and what really stands out were the women throwing handkerchiefs where they’re like fans tossing into the air,” she said.

The dance, An Early Spring, is a vibrant folk dance where dancers twirl handkerchiefs into the air ushering in an early spring, the program book reads.

Classical Chinese dance and folk dance are pivotal to a Shen Yun performance. Launched in 2006 with a mission to revive China’s divinely-inspired 5,000-year culture, almost destroyed under 60 years of communist rule, the New York-based company is lauded all over the world.

Ms. Young was joined at the theater by Richard Gesslei of Honolulu, his wife Sylvia and her daughter Michelle Loo.

Mr. Gesslei said: “It’s an exposure to Chinese cultural arts that I have never seen before. I was very impressed and I loved some of the very creative visual effects. The flying in [digital projections] and how that perfectly integrated with people on stage. That was very clever. That was very memorable.

“And I love all of the costumes, the colors. Very, very different than what I’m used to seeing. It was all very beautiful.”

Mr. Gesslei, who is a retired airline pilot after 33 years service, said he felt “very uplifted.”

His wife Sylvia, and her daughter Michelle, hail from China. Michelle was awarded a trip to their motherland after placing runner-up in a beauty pageant.

“Michelle very much wanted to see this, especially the scenes from Mongolia. They were there in Mongolia and she wore one of those costumes in Mongolia,” Mr. Gesslei said.

His wife, immersed in the beauty of Shen Yun, said the entire presentation was beautiful. “I like having a live orchestra. The costumes were wonderful, the dancers were excellent. Everything was beautiful,” she said.

Like her husband, she was also swept up in the state-of-the-art graphics technology, where animated settings extend the stage.

“Oh, it was awesome. It’s beautiful. I love the costumes,” her daughter Michelle agreed.

Also in the audience was Nathan Wong, a physician, and his wife Sandra.

“Very good,” he said. “I like the bowl dance, the one with the bowls, Mongolian Bowl Dance.

From their tents, Mongolian women emerge balancing bowls on their heads in a dance of welcome. Traditional Mongolian dance is strong yet gentle, with flexible wrists, pliable arms, and a signature shoulder shake, according to the program.

But Mr. Wong was captivated from the moment the curtain rose on the dance Descending to the World.

A heavenly host has gathered to hear the Lord Buddha, who calls upon them to descend with him to Earth to make a magnificent history for humankind, says the program.

“It kind of reminds me of the ribbon dances. The way they swirl the sleeves around. That was beautiful. And just the classical dancing that the women do—I really enjoyed that … I noticed the movements are different, like the way they walk up onto the stage—looks like they’re floating. It’s really beautiful.”

Mr. Wong commented on the Shen Yun Orchestra and how he enjoyed the combination of Eastern and Western instrumentals in all-original composition.