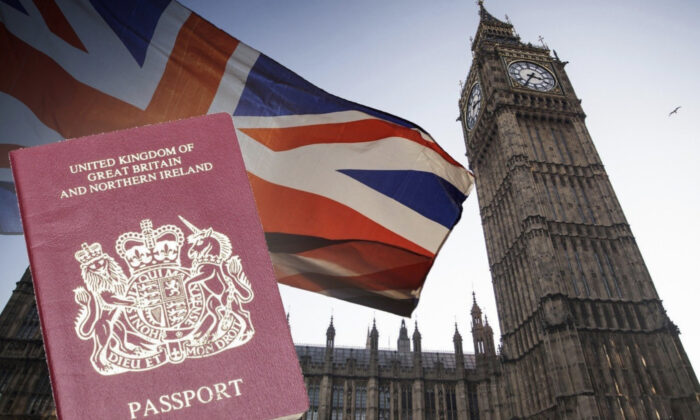 As the National Security Law fogged Hong Kong in recent years, many Hongkongers have emigrated to the UK through British National (Overseas) (BNO) visas and lifeboat schemes to start a new life. But some people who are ineligible for BNO visas, had to apply for asylum based on their involvement in the 2019 Hong Kong Protests. One year later, they are still waiting for approval. (The Epoch Times)
Hong Kong

As of June 30, the UK government (UK Gov) has approved over 130,000 BNO visa applications. However, it is reported that more than 100 Hongkongers, who were ineligible for BNO visas, have been waiting for asylum approvals for over a year.

Recently, two visa applicants, including a former Hong Kong district councilor, shared their journeys in an interview with The Epoch Times.

Due to the long wait and with no updates from UK immigration, one person is ready to leave for Canada.

Thomas (pseudonym), a social activist, revealed that he participated in the anti-extradition movement and other political activities in 2019. Under the national security law, Thomas felt that the longer he stayed in Hong Kong, the greater the risk of being arrested.

Thomas left Hong Kong by himself in 2021 and sought refuge in the UK.

Thomas said, “There is no telling when the regime will move the red line. I can’t tell when I will be arrested. Look at Au Ka-lun. He was arrested for a few spoken words.”

Thomas recalled, “After I landed in 2021, I didn’t look for legal aid. Instead, I sent an application for asylum approval to the Home Office based on my online research.”

Not long after, Thomas attended his first application interview.

He was asked to briefly introduce himself and describe how he had been persecuted. Thomas also had to explain his visit to the UK.

Thomas said, “A few days later, I received two forms asking for my personal information and evidence of why I could no longer return to Hong Kong.”

He filled out the forms and sent the information to the Home Office. And he waited for a reply.

It has been over a year.

He has received no news or updates.

He said his application fell into a black hole

Another interviewee, John (Pseudonym), a former district councilor in Hong Kong, left the city because he was prosecuted for his participation in social movements.

In July 2021, John, like Thomas, also left the only home he knew and headed to the UK seeking asylum. John pointed out, that there are a few procedures involved when someone applies for asylum in the UK. It starts with an initial interview, followed by form filling. Then applicants have wait to hear from the Home Office for a second interview. After that, they will be notified of their application outcome.

John said that if someone is granted refugee status, they can officially live in the UK for five years before applying for naturalization.

However, John has been waiting for over a year now.

The refugee-to-be said, “I think my application fell into a black hole. I don’t know who my case manager is; I don’t know when the second interview will be. Meanwhile, I can’t work. I can’t leave the country. I can’t learn to drive.”

John described his life in the UK so far as being abnormal.

He pointed out that a refugee policy is based on humanitarianism. It is for applicants to live in a safe haven and have a normal daily life as soon as possible. John stated, that the Home Office has a clear policy that stipulates “after the first round of interviews, the decision of granting refugee asylum will be made within six months.”

If an application is delayed for over one year, asylum applicants can apply for a temporary work permit.

However, at present, most Hong Kong applicants have waited for more than one year. As for the temporary work permit as a compensatory measure, John felt it is only for show.

Both Thomas and John stated that over the past year, the Home Office has only contacted them once by mail. The Office notified them that the UK government has yet been able to approve their applications within the 6-month timeline. The Home Office, asked them in the letter, whether they would consider withdrawing their application and returning to Hong Kong.

The Home Office also noted that if they insisted on the application being processed, all they can do is wait.

Neither Thomas nor John was able to contact a person in charge of their cases. They have not been able to get an update on their applications. Whenever they emailed the Office, both of them said they got the same canned responses, that “their cases will be handled as soon as possible.”

A community organization called Hongkongers In Britain, and some members of Parliament, also had zero success in checking their status with the Home Office.

Currently, both Thomas and John, feel stranded, as they cannot work even with the temporary work permit.

One said, “The work permit is limited to positions that require specific high-tech or advanced qualifications, such as engineers, technology experts, or scientists.”

Thomas and John have had little income for over a year while languishing in the UK. They mentioned that although the UKGov provides £40 ($46) a week to those with financial difficulties, it is not enough. They have been using their savings to survive and have been mostly couch-surfing since they arrived in the UK.

They mentioned the difficulty of getting financial aid, “Most Hongkongers don’t fit the requirement of getting a living allowance. We can count the successful cases on one hand.”

Because he has been waiting for over a year, Thomas suspects he will be waiting endlessly for approval. So he plans to leave the UK and seek sanctuary in Canada.

Both Hongkongers who requested asylum status expressed, that they don’t expect the UKGov to guarantee refuge, but they do wish that the UKGov would follow their own asylum approval policy.

John added, “Over the past year, we have been waiting aimlessly. Most of us are tired, anxious, angry, and helpless. The long wait and uncertainty have been mental torture for Hong Kong applicants.”