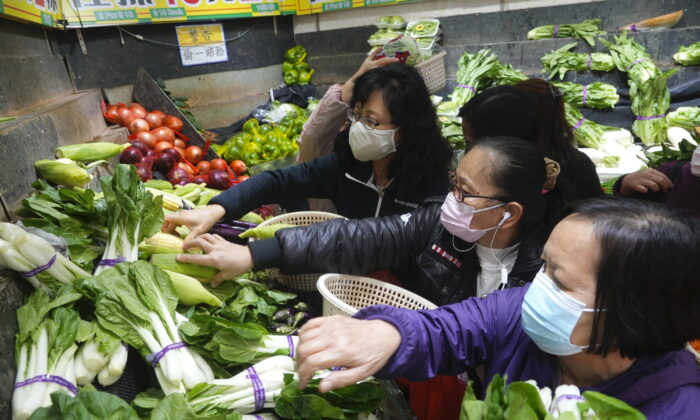 Hongkongers Rush for Haircuts, Produce Ahead of New Curbs

HONG KONG—Hong Kong residents lined up outside hair salons and snapped up fresh vegetables on Wednesday, a day before tightened COVID-19 restrictions go into effect, as new daily cases in the city ballooned to more than 1,100.

Hong Kong leader Carrie Lam announced on Tuesday that places of worship and hair salons must close from Thursday until at least Feb. 24, when a “vaccine pass” will be rolled out that permits only vaccinated people to visit venues such as shopping malls and supermarkets.

In an unprecedented move, she also said private gatherings will be limited to no more than two households.

“It’s a pity that hair salons are told to close. Actually, salons have always adopted a lot of measures, such as mask wearing, since the pandemic began and it should be safe,” said Alan Fong, who was waiting outside a hair salon in the neighborhood of Wan Chai.

Hong Kong has aligned itself with mainland China’s “zero-COVID” policy, which aims to totally stamp out outbreaks, even as many other countries are shifting their approach to living with the virus.

The strategy means that authorities often take drastic measures such as locking down residential estates for mass testing when positive cases are detected, imposing strict quarantine requirements on travelers, and ordering the shuttering of businesses.

An outbreak among truck drivers who transport vegetables from China to Hong Kong prompted authorities to impose strict testing measures and order some drivers into quarantine, causing prices of fresh produce to skyrocket.

“There is no supply. Even if there is, the import cost is high and then we have to sell at high prices,” said shopkeeper Choy Kam-hing.

Choy said the price of choy sum, a popular vegetable in Chinese cuisine, has doubled.

Officials have pleaded with residents to get vaccinated and avoid going out, while ramping up testing capacity and ordering tests of anyone deemed a close contact of the thousands of cases in the city.

“I think the whole testing thing is pointless. Everyone is very busy with their lives and there are so many untraceable cases, but we have to be repeatedly tested,” said Bosco Wong, a kitchen worker who was tested Wednesday after a colleague was found positive for the virus. “I think the whole thing is such a waste of time.”

The city’s decision to follow a “zero-COVID” approach has drawn criticism from businesses, expatriates, and local residents, who complain that the harsh restrictions have impacted their lives.

“I have been troubled by the pandemic for a long time, and I feel that I can do nothing about it,” said Judy Lau, who was getting tested at a mobile testing station after a positive case was discovered in her building.

“I don’t understand the government policies. The pandemic waves just come and go and it has seriously been affecting my mental health.”

By Alice Fung and Janie Lo