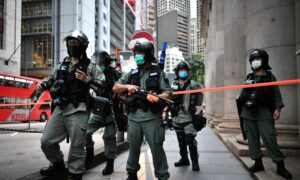 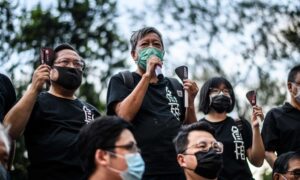 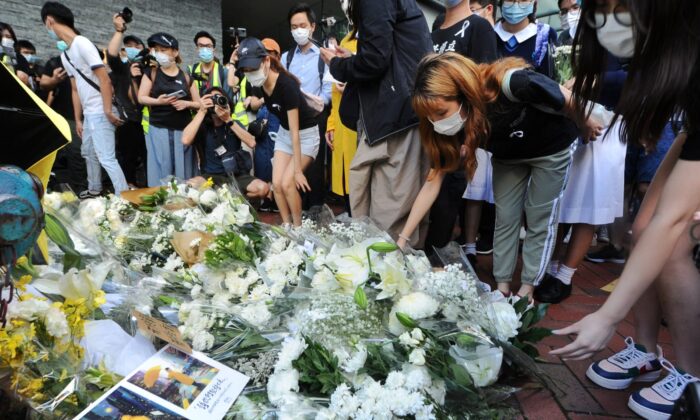 People lay down flowers to mourn the death of a local protester, near the Pacific Place mall in Admiralty, Hong Kong, on June 15. 2020. (Song Bilung/The Epoch Times)
Hong Kong

More than 1,000 Hongkongers, many wearing black with a white ribbon pinned to their clothes, paid tribute to the one-year anniversary of the first death in connection to a mass protest movement against Beijing’s encroachment.

They laid flowers at a makeshift memorial at Pacific Place, a shopping mall where Marco Leung Ling-kit, 35, fell to his death on June 15, 2019, after climbing to a scaffolding and unfurling a banner protesting the since-scrapped extradition bill. The proposal would have allowed individuals to be sent to mainland China for trial in Communist Party-controlled courts.

The tribute began at around 6 p.m. local time. Before it started, long lines had already formed as people waited their turn to lay down white flowers. Occasional shouts of “Free Hong Kong, Revolution of Our Times” and “Five Demands, Not One Less” came from those queuing up, the latter referring to protest demands for universal suffrage, amnesty for arrested protesters, and more.

At about 6:15 p.m. local time, Hong Kong police warned that people shouldn’t attend the “unauthorized gathering” at Pacific Place, and urged those already there to leave.

Despite the police warning, many Hongkongers took turns holding moments of silence before the makeshift memorial. One man went down on his knees, while others bowed solemnly.

Hongkongers also laid down yellow umbrellas—a symbol of the pro-democracy movement—along with candles and personal notes. One umbrella had the words “Free Hong Kong” and “[Hong Kong leader] Carrie Lam, Step Down” written on it.

One note read: “It has been one year. Hongkongers have never forgotten about you. We will continue to do the work of ‘Liberate Kong Kong, Revolution of Our Times’ for you.”

Another note read: “He did not jump to his death. He was pushed to his death by a regime.”

A man with a guitar played songs including “Glory to Hong Kong,” the unofficial anthem of the protest movement.

Some memorial attendees were also carrying posters, including one with the words, “The Heavens Will Destroy the Chinese Communist Party.”

At close to 8:30 p.m. local time, Hong Kong police issued another statement, saying it would “take appropriate measures to enforce the law” depending on the situation at Pacific Place, and that too many people had gathered inside and outside of the mall. The police warned people to leave or risk being arrested.

Many continued to visit the memorial into the late evening, with a crowd outside the mall holding a candlelight vigil. Some staged a peaceful rally inside the shopping mall, as people flashed their cellphone lights while singing and shouting protest slogans.

At around 11:30 p.m. local time, riot police officers arrived at the scene and told people to leave the area.

Just before Leung’s death, about 1 million locals took to the streets on June 9, 2019, against the extradition bill, marking the start of the protest movement. Days later, on June 12, more than 2 million again marched in downtown Hong Kong.

Civil Human Rights Front (CHRF), the organizer behind the mass marches and other major rallies last year, called on people to show up at Pacific Place to remember Leung.

“One year ago, he wrote down the five demands. With his love for Hong Kong, he became the first victim of the movement. One year later, how Hongkongers inherit his will to persist in this revolution of our times will be what he has left behind for this world,” the CHRF wrote on its Facebook page in the early hours on June 15.

Two other memorials were also held on the evening of June 15, one in Tin Shui Wai and the other in Tuen Mun, both located in the New Territories area near the border with mainland China. Police officers were spotted at the two locations.