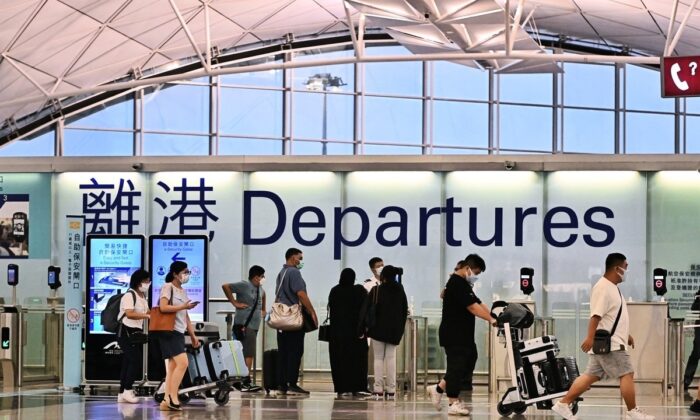 In the second quarter of 2022, the number of claims for MPF funds withdrawal on grounds of permanent departure from Hong Kong is 8,600, an increase of 14.7 percent quarter-on-quarter. (Sung Pi-lung/The Epoch Times)
HK Current Affairs

The Mandatory Provident Fund (MPF), is a compulsory saving scheme (pension fund) for the retirement of residents in Hong Kong. It was implemented in December 2000. Most employees between 18 and 64 and their employers are required to make monthly contributions to the mandatory provident fund scheme.

Scheme members may withdraw their MPF before reaching age 65, only under circumstances of early retirement, permanent departure from Hong Kong, total incapacity, terminal illness, small financial balance, and death. For permanent departures, the applicant must prove he or she is eligible to enter and stay long-term in the target country.

Recently, the Mandatory Provident Schemes Authority (MPFA) released its latest quarterly report of the MPF Schemes Statistical Digest up to June 2022. In the second quarter of 2022, the number of claims for withdrawals from MPF based on permanent departure from Hong Kong was 8,600, an increase of 14.7 percent quarter-on-quarter and a year-on-year increase of 7.5 percent.

In monetary terms, total withdrawals involved were HK$2.114 billion (US$269.3 million), a quarter-on-quarter and a year-on-year increase of 5 percent and 0.9 percent, respectively.

In addition, in the second quarter of 2022, the total number of cases for withdrawals from MPF for various reasons (including retirement) was 52,700, a quarter-on-quarter increase of 12 percent.

The MPFA pointed out that since scheme members may have more than one MPF account, and applicants must apply to individual trustees, so the actual number of applicants will be less than the number of claims. The authority also pointed out that the withdrawal of MPF funds on grounds of permanent departure from Hong Kong is also different from the number of emigration cases. Applications made to the trustee for withdrawal on such grounds also include those applicants returning to his/her place of origin (for example, non-local employees who finished work in Hong Kong), or left Hong Kong but lived on the mainland.

On the MPFA’s point that permanent departures from Hong Kong are also different from the number of emigration cases, it can be shown that the number of MPF withdrawals is much fewer than permanent departures. The actual number of MPF settlements is never going to be the same as people leaving Hong Kong as many will be youngsters, that have never opened an MPF account, also the MPFA does not accept the BN(O) passport to support a withdrawal claim.

Many of those departing withdraw from the MPF (if they can) but others, because they cannot use the BN(O) passport as evidence to prove their eligibility to travel to and reside in the UK, will have difficulty proving that they can legally reside overseas on a long-term basis.

From the government statistics on labour, the HK labour force overall reduced from 3.892 million in the second quarter of 2021 to 3.745 million in the second quarter of 2022, a reduction of 147.500. In the same period for people between 15 and 44 years old employment reduced from 1.858 million to 1.765 million, a reduction of 93,000—a similar number to the permanent departures from HK.