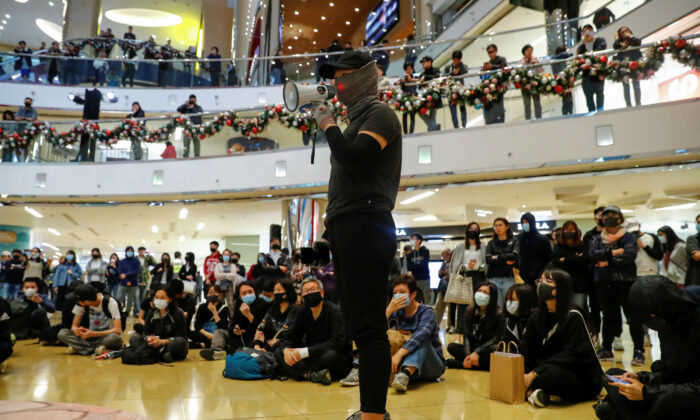 A protester delivers a speech during a demonstration inside a shopping mall in Taikoo, in Hong Kong, China Dec. 15, 2019. (Reuters/Thomas Peter)
HK Current Affairs

HONG KONG—Shouts of “five demands, not one less” reverberated across Hong Kong on Dec. 15, as protesters pushed their six-month-old protests at a public square and several shopping malls.

On a Sunday during the peak holiday shopping season, groups of protesters marched through the malls shouting slogans and urging people to boycott businesses that support the Hong Kong government or Beijing.

At night, several hundred protesters held a vigil to remember a demonstrator who fell to his death outside a shopping mall exactly six months ago, after unfurling a protest banner.

The protests came ahead of a scheduled meeting between Hong Kong Chief Executive Carrie Lam and Chinese leader Xi Jinping in Beijing on Dec. 16.

Lam’s visit will mark be the first since her government suffered a crushing defeat in the city’s district council elections, prompting speculation that her meetings with Beijing’s top leadership will result in a possible cabinet reshuffle. Lam, however, appeared to shrug off that suggestion before she left, saying the main priority was to restore order to the city.

Scuffles between protesters and riot police occurred at multiple shopping malls in the afternoon. At around 3:50 p.m. local time, black-clad protesters could be seen trying to block an escalator with heavy metal signs inside the New Town Plaza, a shopping mall located in Sha Tin. In response, police officers rushed toward them and eventually arrested at least four protesters, including a female who looked to be in her teens.

I took footage of this young man getting arrested. Upon review, it looks a man carrying shopping bags pushed a hammer-looking tool toward the protester with his feet. Police then pushed hammer closer to protester, appearing as if it’s his #hongkongprotests pic.twitter.com/OTfDRBWgrH

Another protester was seen trying to come to the aid of those arrested, but was forced away by baton-wielding policemen. Police threatened passers-by not to get close and fired pepper spray several times, hitting locals who were not dressed in black and several reporters, including Hannah Cai, a reporter with the Hong Kong edition of The Epoch Times.

When police escorted the arrested to an area outside of the Shatin metro exit, which is located next to the shopping mall, residents gathered and shouted at the police to leave. Police then took out a blue flag warning people of illegal assembly, whereby the police could resort to the use of force.

After police escorted the arrested outside to an area outside Shatin MTR exit, where police vans were waiting, residents gathered and shouted at them to leave. That’s when they took out blue flag warning of illegal assembly, whereby they can use of force #hongkongprotests pic.twitter.com/yrwUhlYLrg

Locals could be heard shouting “five demands, not one less” and “black police” at the police.

At one point, protesters and media surrounded a mall security guard in a yellow jacket, asking if he gave away the location of protesters inside the mall to the police.

Police have since issued a statement saying that officers entered the mall to carry out “enforcement actions” in response to protesters’ “illegal acts” of vandalizing shops and blocking the entrances and staircases with miscellaneous objects.

At another shopping mall, Telford Plaza, which is located in Kowloon, police fired pepper spray twice: the first time after getting into an argument with local residents, and another time when a local was pushing a trolley in the police’s direction, local media reported.

The protests at shopping malls, which also included PopCorn located at Tseung Kwan O, Times Square in Causeway Bay, and the City Plaza in Taikoo Shing, was organized by local netizens in a campaign named “Christmas Shop.” They called on people to dine at “yellow” restaurants at noon on Dec. 15, before turning out at shopping malls to go “window shopping,” a euphemism for protest.

Hong Kongers have labeled stores into “yellow” or pro-democracy and “blue” or pro-government, in an effort to put economic pressure on the city government, while showing their determination to fight off Beijing’s encroachment in the city’s affairs.

At around 4:40 p.m. local time, about a hundred protesters gathered at City Plaza, where they sang Glory to Hong Kong, the unofficial song of the ongoing protest movement.

Also in City Plaza, protesters put up signs on pro-government stores urging people to boycott them, and gathered outside a pro-government coffee shop, urging customers inside not to patronize the businesses.

At PopCorn, the storefronts of several pro-government shops were spray-painted with the word “boycott.”

Also on the afternoon of Dec. 15, several hundred people gathered for a rally at Edinburgh Place in downtown Hong Kong to show their support for a scheduled three-day strike by the city’s social welfare sector.

The strike, with the objective of urging the city government to answer the protesters’ five demands, will start on Dec. 17.

Chen Hung-sau, a social worker from the Hong Kong Social Workers’ General Union, spoke at the rally, saying that the purpose of the strike was to take the burden off young protesters, who have mostly been on the frontlines of the protest movement.

A social worker surnamed Kwan told the Hong Kong edition of The Epoch Times that some social workers have witnessed how the legal rights of arrested protesters have been denied by police. He hopes a more impactful strike can be initiated in the future.

A woman surnamed Chan in the accounting business was writing Christmas cards for protesters still held in jail. She said tearfully that though she didn’t have the courage to stand at the frontlines of the protests, she was grateful for the youngsters who did.

At the end of the rally, people shouted a number of slogans, including “liberate Hong Kong, revolution of our times.”

In the evening, hundreds of people attended a vigil outside of a local shopping mall, Pacific Place in Admiralty, to pay tribute to Marco Leung, a 35-year-old man who on June 15 plunged to his death after climbing up the mall’s construction scaffolding to unfurl a banner denouncing a since-withdrawn extradition bill.

A long line of ppl waiting to place flowers in remembrance of the first protester to have died during the #HongKongProtests, back in June. He fell from Pacific Place mall in Admiralty soon after govt announced the extradition bill would be suspended pic.twitter.com/89kXKl9ZDb

Leung, whose passing was the first protest-related fatality, has since been hailed by demonstrators as a martyr.

“He’s the first one to have gone on this road that he shouldn’t have, because of this [Hong Kong] administration,” a woman surnamed Moon explained to The Epoch Times. She was carrying a bouquet of paper flower origami in her hands, which she said took roughly an hour to complete.

“We can’t forget him…We will help him walk the remainder of this road, so that he didn’t sacrifice in vain,” Moon said, adding that she hopes “he will bless” the movement from above.

People lined up in a long queue to lay flowers on a makeshift memorial, which was also adorned with candles and a yellow banner that read: “Black police, cold blooded.”

Some attendees folded paper cranes while sitting on the pavement, while others sang the hymn “Sing Hallelujah to the Lord.”

A 16 year-old teen who only gave her surname Wong was watching an online video to fold paper flowers. She said Leung’s death “allowed many people to become awakened…to see clearly that this government can push someone to die.”

The day after Leung’s passing, roughly two million people marched on the streets to call for the bill’s full withdrawal.

She lamented that he lost his life, along with several other protesters who reportedly committed suicide, calling the emotional trauma a “humanitarian crisis.”

And though she admitted that she was not optimistic the government would fulfil all five demands, she said the key was that everyone was trying their best. “As long as we have hope, because so many people have participated, especially the youth, who are the future…We don’t know if it’ll be successful, but at least it won’t end.”

A middle-aged woman surnamed Yang also said Hongkongers should be “mentally prepared for a long-term battle,” adding that she hoped foreign governments could pressure the Chinese regime on the Hong Kong issue. “I hope the international community can pay attention to Hong Kong,” she said.

Around 9 p.m., black-clad protesters appeared in the Mongkok neighborhood. Police arrived and raised the blue flag, urging people to leave. At around 10:30 p.m., riot police on Nathan Road fired pepper spray and made several arrests. At one point, officers surrounded a man in a white helmet and fired pepper spray at him, then beat him with batons. Typically, journalists or first-aid medics wear such helmets.

After 11 p.m., dozens of residents engaged in a standoff with police, who then fired multiple canisters of tear gas.