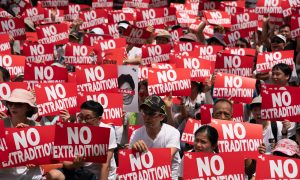 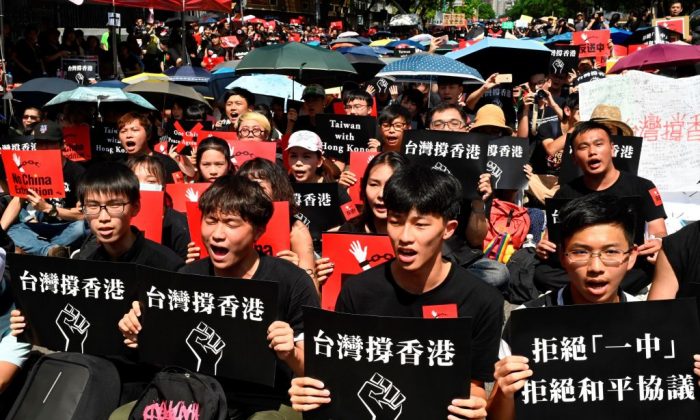 Protesters mostly from local universities display placards during a demonstration in Taipei on June 16, 2019, in support of the protests in Hong Kong against the proposed extradition bill. One of the placards reads “Taiwan Supports Hong Kong.” (Sam Yeh/AFP/Getty Images)
Social Issues

TAIPEI, Taiwan—Many Hongkongers have immigrated to neighboring Taiwan in recent years to enjoy the democratic freedom that is slowly being lost in Hong Kong.

“The freedom in Hong Kong is being eroded step by step. Many of the students protesters [in Hong Kong] against the proposed extradition bill have said they want to immigrate, whether it is to Taiwan, to the U.K., or to Japan,” said Ho Wing-tung, a Hong Kong student in Taiwan, in a phone interview with the Asia-Pacific bureau of the New York-based broadcaster NTD.

However, Hong Kong has seen the encroaching influence of the Chinese Communist Party (CCP) in local politics, education, and freedom of the press in recent years.

Hong Kong resident Yung Xiu Kwan, 67 is also getting ready to move to Taiwan, unhappy over the erosion of civil liberties in the city due to Beijing’s increasing encroachment, according to a June 18 article by Reuters.

“Without freedom and democracy, it’s like being put in jail, like living in a concentration camp … without freedom, [I] would rather die,” said Yung, as she waved a Taiwan flag at a massive protest in Hong Kong on June 16.

“Taiwan can offer that because Taiwan has democratic elections and a constitution that safeguards democracy.”

The Hong Kong government first proposed the controversial amendments to its extradition laws in February, which would allow the chief executive—the city’s top official—to sign off on extradition requests, including from mainland China, without approval from the Legislative Council (LegCo).

If the bill is passed, many worry that Beijing could potentially pressure the Hong Kong government to hand over citizens of any nationality—including citizens from the United States and Taiwan—for them to be trialed in the CCP’s courts under false pretenses.

In Hong Kong, large-scale protests against the bill have broken out in recent weeks, with 1.03 million taking part in a march on June 9, following by another march a week later on June 16 with about 2 million participants.

Ho has established a watch group in Taiwan to monitor the development of the bill. She was one of about a hundred Hong Kong students studying in Taiwan who delivered a petition letter to support the demand to scrap the bill to the Hong Kong Economic, Trade, and Cultural Office in Taipei on June 9, according to local media.

According to data from Taiwan’s Ministry of the Interior National Immigration Agency, the number of immigrants from Macau and Hong Kong has steadily increased in recent years. There were 697 such immigrants in 2014 and the number increased to 1,267 in 2018.

“I’m moving to Taiwan with my wife next year,” said Melvin Chu, a Hong Kong resident in his late 20s who joined the march on June 16, citing worries over political freedoms, according to Reuters.

“Things are getting worse in Hong Kong. We are worried for the next generation.”