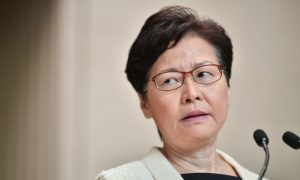 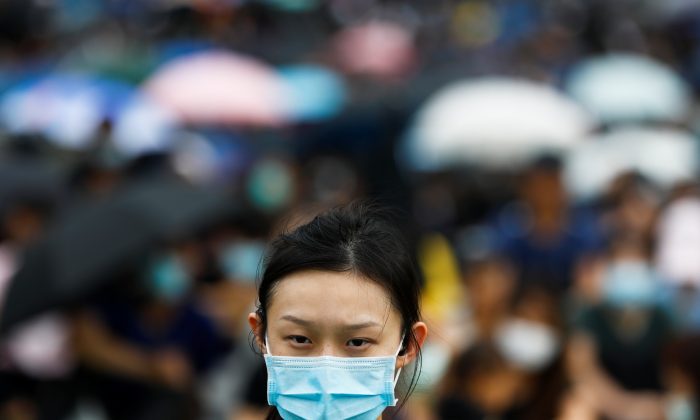 A protester covers her face with a mask during a general strike at Tamar Park in front of the government buildings in Hong Kong, on Sept. 3, 2019. (Kai Pfaffenbach/Reuters)
HK Current Affairs

Over 40,000 Hongkongers gathered at Hong Kong’s government headquarters on Sept. 3 for a rally in support of a city-wide strike.

It was the second day of a mass strike involving individuals from around 30 sectors of society in a city rocked by the extradition bill crisis.

For months since mid-June, millions of Hong Kong citizens have turned up on the streets determined to see the government heed their message: withdraw the now-suspended extradition bill, drop charges against protesters, investigate allegations of police brutality, and grant the people universal suffrage.

At Tamar Park in Admiralty, students, law professionals, and workers expressed their disappointment of the authorities and worries that they could lose their deeply cherished rights if they don’t keep up their fight against the Chinese Community Party’s (CCP’s) increasing influence in Hong Kong society.

“Hongkongers have no way to back down,” the banner unfurled at the lawn read.

“The extradition bill is a task that the Chinese Communist Party gave to Hong Kong [government] … Our baseline is to prevent the CCP from infiltrating our freedom,” Sang Pu, lawyer and a member of the free speech advocacy group Independent Commentators Association, said at the rally. “The [past] three months have been exhausting, but what do three months account for in the scale of the civil movement and lives?”

Ying Fuk-tsang, director of the divinity school at the Chinese University of Hong Kong, said that Hong Kong should not be intimidated by the Chinese regime’s veiled threats of sending troops to quash the protests.

“What we are fighting for are the values and beliefs unshakable by either violence or lies,” he said in a speech.

Public discontent has grown even stronger lately over the escalation of police use of force on protesters during confrontations.

Over the weekend, police stormed a subway station, beating and tear-gassing passengers indiscriminately, creating pools of blood in train cars.

“Is it much different between the present and if [the CCP] sends out troops? It’s only a matter of uniforms,” Ying said.

A volunteer lawyer, who identified herself as Michelle, also spoke of the challenges the lawyers faced while assisting with the detained protesters.

In a recent case, the police made Michelle wait for hours at the detention center and did not let her see three protesters until after their testimony. She also heard people complaining that the police were using force toward them.

“At the moment, the most troublesome [issue] for the entire participants there is the white terror,” Cheryl Ng, chairperson of the Hong Kong Federation of Trade Unions, told The Epoch Times. Ng said that the police have been using force beyond “what they are allowed to.”

“[The legal assistant teams] found their clients in the detention center either subject to a severe injury, a fracture, or mentally being threatened heavily if they dare to complain to the police,” Ng said.

Ng noted that several local companies have bowed to government pressure—at least 21 employees were dismissed for being associated with the protests.

“It’s just an exercising of basic rights for anyone … and this is what we [are] empower[ed] by the law already, you can’t just threaten people and take these rights away.

“That’s why a lot of people still want to cover most of their faces in order to maintain this freedom for as long as they can,” she said.

For two days in a row, white wreaths from civilians piled up at Prince Edward metro station in remembrance of the Aug. 31 violence where at least ten passengers were injured by police batons. The police again dispersed the crowd with tear gas.

The Hong Kong Bar Association also issued a statement (pdf) on Sept. 3, condemning the police for their abuse of power in the train attacks, saying that the conduct had “greatly reduced public confidence.”

“As disciplined professionals equipped with public authority and lethal and non-lethal weaponry, any unwarranted or excessive use of force against members of the public, be they protesters or ordinary passers-by or residents in housing estates, cannot be condoned.”

The Epoch Times reporter Jeremy Sandberg contributed to this report.