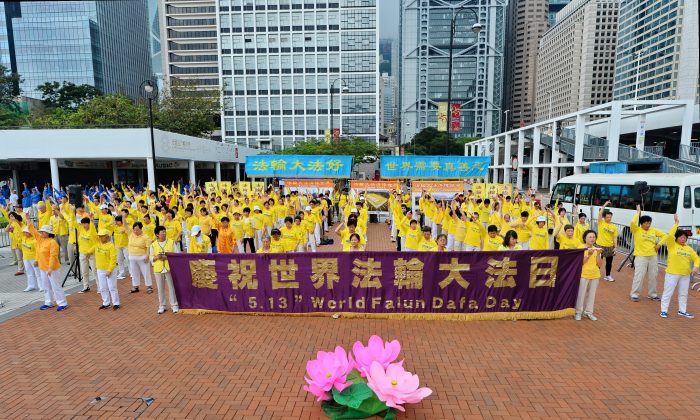 Falun Gong practitioners do exercises at Edinburgh Place outside City Hall in Central District, Hong Kong, on the morning of May 10, 2015. (Epoch Times)
HK Current Affairs

May 13 is World Falun Dafa Day, the 23rd anniversary of the day Falun Dafa was made public. It also marks the birthday of Falun Dafa’s founder, Mr. Li Hongzhi.

Falun Dafa, also called Falun Gong, is a traditional Chinese spiritual discipline known for its meditative exercises, health benefits, and moral teachings. Falun Dafa practitioners in every corner of the world hold grand celebrations at this time each year.

In Hong Kong, hundreds of practitioners from Taiwan, Japan, Korea, and neighboring countries rallied at Edinburgh Place outside City Hall in the Central District on May 10.

The celebration started with a group practice of the Falun Gong exercises accompanied by harmonious music. Practitioners wore yellow shirts with the words “Truthfulness, Compassion, Forbearance,” the three main principles of Falun Dafa.

They recorded their greetings to Mr. Li: “Happy birthday, Master!” and “Thank you, Master!” The Chinese word for “Master” is a respectful title for a teacher in China.

They also sang a few songs including “Falun Dafa is Good,” “Thank You, Master,” and “Be Saved,” which moved many practitioners to tears.

A few Falun Dafa adherents came from mainland China to participate in the celebration.

One 70-year-old woman said with tears in her eyes, “I feel so glad that in Hong Kong, Falun Gong practitioners can exercise, rally, and march freely and publicly.”

She started practicing Falun Gong in 1999, and this was her first time joining this type of event in Hong Kong. She was moved because Falun Gong has been persecuted in China since 1999, and many practitioners are imprisoned for their beliefs.

She also wanted to express her gratitude toward benevolent Master Li.

A 53-year old mainland Chinese practitioner said she started practicing in 1997, and this was also her first time attending the celebration. “I’m truly moved; I felt so good after I arrived,” she said.

She added that Falun Gong is still being suppressed in China, and practitioners have to endure immense pressure to uphold their faith. She especially wanted to thank Master Li and wish him a happy birthday.

The celebration ended before noon, and a parade started in the afternoon. The procession was led by the Tianguo Marching Band and started at Victoria Park, marching through the Causeway Bay, Wan Chai, and Central districts. The parade attracted many onlookers along the way.

Miss Zhou from Guangzhou City said she was astonished. She agreed with Falun Gong’s principle of conducting oneself according to truthfulness, compassion, and tolerance and being a good person.

She said that unlike China, Hong Kong is very democratic, so Falun Gong adherents can rally and parade publicly without any consequence.

A mother and daughter from Guangdong Province were amazed by the band, which they recorded on their phone. They said they had come to Hong Kong many times, but this was the first time they saw the parade.

They said they would share the footage with their families and friends after going back to China.

Julia, a student from Peking University, said the parade was spectacular. She said that everybody has the right to freedom of belief.

Lam praised Falun Gong practitioners for truly following the principles of truthfulness, compassion, and tolerance over the years to face the oppression and tyranny of the Chinese Communist Party (CCP). He said this is what has impressed him the most.

Even while being mistreated, harassed, besieged, or cursed by pro-CCP groups during Falun Gong demonstrations, practitioners have never done the same or fought back, Lam said. They have always remained rational and peaceful, and this has really moved Lam.

“When something like this [mistreatment by pro-CCP groups] happens, I believe people can distinguish between right and wrong, including every Hongkonger or even mainland Chinese tourists. When they see it, they’ll realize that after all truthfulness, compassion, and forbearance is the true Falun Gong spirit.”

Democratic Party legislator Wu Chi-wai said that Falun Gong practitioners have taken a peaceful, rational, and non-violent way to expose the CCP’s persecution. Some have even risked their lives over the past decade, and he admired the persistent work and effort the practitioners have put in.

He said that Falun Gong practitioners have proven their spirit to the world in the face of adversity.

“I believe Falun Gong practitioners are actually showing the public that we are in the process of fighting for universal values, and more and more people will join if we persist. We believe that as long as our hearts have not died, there is hope for another day.”