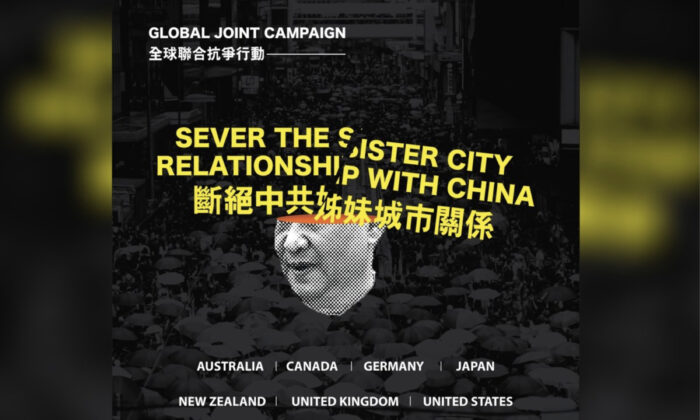 A poster used by Hongkonger groups around the world to promote their “Global Joint Campaign” to urge cities to cut ties with their “sister–cites” in China. The campaign started on July 1, 2022. (Yellow Power NZ)
Hong Kong

A total of 19 Hongkonger groups around the world launched a “Global Joint Campaign” on July 1, urging 163 cities to sever “sister city” relationships with the Beijing regime.

“Hongkongers in Deutschland e.V.”(HKDEV), one of the organizations involved in the “Global Joint Campaign,” issued a petition, in which the group mentioned the atrocities perpetrated by the Chinese Communist Party (CCP) in Xinjiang, Tibet, and Hong Kong, and called upon the 58 cities in Germany to end their “sister city” relationships with the CCP.

In the letter, it explained that the “sister-city relationship” is a tool used by the CCP for its direct interference, on the sovereign affairs of other countries.

For example, Zdenek Hrib, Mayor of Prague, the capital of the Czech Republic, once asked the Beijing government to remove a statement in their sister-city agreement which indicates “Prague must abide by the ‘One China Policy’ in speeches.” Beijing ignored the request and retaliated economically.

HKDEV pointed out in its petition that the Chinese association involved, manages the sister-city agreements through the United Front system to influence and promote CCP propaganda. The group called on local governments to defend justice and democratic values.

Radio Free Asia reported on July 9, that Aniessa Andresen, president of “Hongkonger in Deutschland e.V.,”  said that the association had emailed 58 cities in Germany but only received two replies; these were from Rothenburg and Worms.

Cut Ties with CCP and Their Sister-Cities

The “Global Joint Campaign,” is calling on 163 cities all over the world to break ties with their sister cities in Cjhina. The 163 cities are in seven countries: Japan, Australia, New Zealand, Canada, the United States, Germany, and the United Kingdom.

HKDEV issued a statement earlier, stating that sister-city agreements are used by China for foreign diplomatic infiltration strategies. It is a tool designed by the CCP, to manipulate the world and expand its influence of totalitarian rule.

The statement continued to criticize that the Beijing government has continuously eroding Hong Kong’s high degree of autonomy; not only did it brutally suppress democracy and trample on freedom of the press, but it has also violated the Sino-British Joint Declaration, resulting in thousands of Hongkongers becoming political prisoners.

The statement mentioned that, since 2014, Muslim Uyghurs have been detained in re-education camps in Xinjiang and many escapees have suffered torture and even death at the hands of the CCP.

However, against solid evidence, CCP mouthpieces refute these allegations.

The statement also states, “China’s notorious record of human rights violations and non-compliance with international treaties, highlight its totalitarian nature. Yet many countries choose to turn a blind eye for economic benefits.”

Daniel Kwok Tsz-kin, founder of “Scottish Hongkongers,” told the Epoch Times that they would meet with members of the Scottish Parliament (MSP) regarding the issue.

They had launched a petition urging the Nottingham city council to end its sister-city relationship with Ningbo, China.

On June 12, the group initiated a march with thousands of Hongkongers joining in. The protest ended at the city council offices to submit its petition to the city council.

NSWHK also referred to Russia’s invasion of Ukraine, urging the Nottingham City Council to cut sister-city ties with Krasnodar in Russia, and Minsk in Belarus.