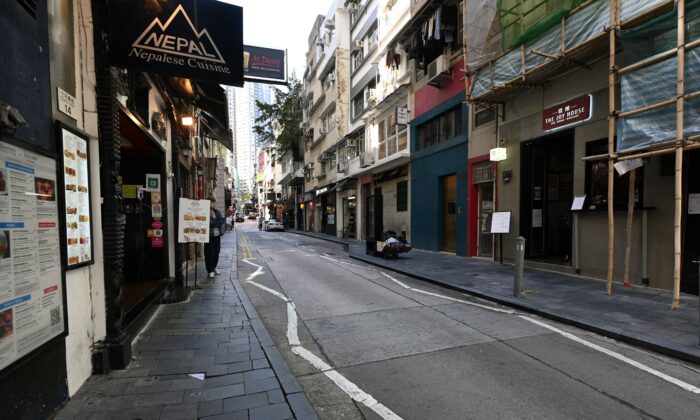 An empty street is seen in the normally bustling bar and restaurant district of SoHo in Hong Kong on March 8, 2022. (Peter Parks/AFP via Getty Images)
HK Business

Hong Kong’s economy contracted by 4 percent in the first quarter, disrupting the growth trend of the previous four quarters. The Hong Kong government adjusted its full-year economic growth forecast to nearly half of the original forecast. The economic contraction coincided with a sharp rise in the unemployment rate to 5.4 percent, the highest level since June last year. Some analysts expect the unemployment rate to deteriorate further. A survey showed that the Hong Kong government followed the mainland’s Zero-COVID Policy and imposed strict travel restrictions and other measures that affected market sentiment and also presented challenges for Hong Kong businesses.

On May 13, the Hong Kong Census and Statistics Department released the first-quarter gross domestic product (GDP). Hong Kong’s real GDP contracted by 4 percent year-on-year in the first quarter of this year. On a seasonally adjusted quarter-to-quarter comparison, real GDP fell by 3.0 percent.

The report shows that domestic demand in Hong Kong has also weakened significantly. The sharp drop in market traffic, coupled with the deteriorating labor market conditions, turned private consumption expenditure to a year-on-year decline of 5.5 percent in real terms. At the same time, business sentiment deteriorated, the year-on-year decline in overall investment expenditure widened to 8.4 percent in real terms.

The report pointed out that the worsening global economic outlook in the future may continue to affect Hong Kong’s export performance. Factors such as the situation in Ukraine, the evolution of the global pandemic, and Sino-U.S. relations have also added uncertainty.

Hong Kong Financial Secretary Chen Maobo said in a blog on April 15 that due to the impact of the COVID-19 epidemic, economic data in April is expected to remain weak, and he decided to lower the annual economic growth forecast from 2-3.5 percent to 1-2 percent.

Chen Maobo said that the latest unemployment rate published is from February to April, and the numbers can be expected to deteriorate further as a reflection of the peak of the COVID-19 outbreak.

According to a survey, the Hong Kong government followed the mainland’s Zero-Covid policy and implemented strict travel and social distancing restrictions, which affected market sentiment and made challenges for Hong Kong businesses.

The American Chamber of Commerce in Hong Kong said in its 2022 Business Confidence Survey that “Hong Kong still has business opportunities, but a number of issues, notably strict travel restrictions and deteriorating U.S.-China relations, caused stress on market sentiment.”

The American Chamber of Commerce in Hong Kong surveyed 151 business representatives and 111 individual members from Sept. 10 to Oct. 8, 2021. According to the survey, 60 percent of respondents regarded international travel restrictions as a major business challenge, surpassing the concerns of Sino-U.S. relations (44 percent) and the pandemic (40 percent); 35 percent of respondents believe that legal and regulatory inconsistencies are the main challenges they face, with political uncertainty (32 percent) also cited as a main business challenge.

The report pointed out that Hong Kong’s strict pandemic control policies are weakening its attractiveness as a global financial center.

In addition, the survey shows that both corporate and individual members of the American Chamber of Commerce are increasingly pessimistic about the rule of law in Hong Kong, and corporate members are particularly concerned about this. More than 8 out of 10 companies are affected by Hong Kong’s National Security Law. Nearly half of businesses believe that employee morale has been affected and report that employees have migrated as a result.